What Belonging at Yale Really Means

Imagine you are green, and most of the people in your country, particularly people in positions of power, are blue.

Your first week as a freshman at one of the most powerful institutions in your country, you walk into the huge hall, called Commons, with its colossal blue and white banner bearing a single word: YALE. It’s beautiful. Your heart swells with pride when you see it.

And then you scan the room. There are roughly 60 tables with about 10 people per table. Fifty-eight of those tables are filled with mostly blue people, with a few orange, purple and green people mixed in. Two of those tables, front left, are full of green people. A green person motions for you to come over. You smile widely.

It is the first time in almost a decade you have had enough fellow green people at your school to fill two whole tables. Two tables out of sixty. You are excited about this.

You glance over at the people clearing tables and serving food. As you expected, they are mostly green like you.

Over the next few weeks you learn that, like you, most of your fellow green classmates seated at the two green tables in Commons also were top students at private prep or boarding schools. The few from majority green high schools, usually in California or the South, tell you Yale admissions officers came looking for them, having recruited others from their school in the past. They couldn’t pass up the amazing need-based financial aid package a prestigious school had to offer. You feel sorry for them.

You at least are used to the cold winters and sea of blue people. You can take the three-hour train ride home easily to see your green family when it feels like you might drown in a sea of blue. You are accustomed to belonging while not belonging at the same time.

Over the next few weeks you also meet your Master. All students at Yale have a Master. The Master is here to help you settle in and feel like you belong in the Yale community. The Master is typically a blue man. This is a country where green people like you were once forced to work for blue Masters without pay. Despite his good-nature and regular invitations to attend lectures, dinners and social gatherings in his home, you rarely go.

Instead you spend most of your social time at the Green-American Cultural Center, eventually co-leading the Green Student Alliance at Yale. Sometimes, George, an old local green resident, attends these meetings and sneers when you and your fellow green students say they don’t want to cause a stir over a recent injustice to a green person. George doesn’t understand. He was from a different generation. Segregation is over. Apartheid is over. Those were systemic issues. You now have the privilege of obtaining a Yale degree.

Yes, campus police could have asked for your student ID first instead of shining a flashlight in your face and asking where the hell you were going last night as you walked back from the library. Yes, it would be nice if that all-blue fraternity hadn’t made their only green student pledge wear a butler’s outfit and called him Uncle Ben during pledge week. But you should have walked the long way through campus instead of the street outside it. That green student should have known better than to pledge that all-blue fraternity.

It’s just one overzealous officer. Just one obnoxious frat. Just one Master’s opinion that you should just “look away” if someone’s Halloween costume offends you. Why should you, a college kid, raise a stir over hurt feelings and pride?

Here’s why: Because it doesn’t stop once you leave those Ivy Towers. If you don’t find a way to speak up for yourself now, when there isn’t a mortgage, spouse, job or child to worry about, you may never have the right words. If you don’t find a way to tell your fellow students now, when they are most open to learning and willing to listen, years later, when a co-worker, a neighbor or a friend of a different race tries to explain how they have been hurt or wronged, your fellow alumni may find it hard to hear.

If you don’t explain why you, too, have the right to free speech, you may feel compelled to write an article in which you describe your own experience using the second person “you” instead of first person “I” and describing your race as green aliens, knowing that Martians may be easier for many people in your country to empathize with without getting offended, defensive or uncomfortable.

If you don’t speak up now, you, too, will wince when you see a photo of one of your favorite professors, now Dean, standing surrounded by a sea of hurt students of many races. And you, too, will wonder, when your class reunion card comes in the mail: “In my four years, did I learn how to change the rules or did I simply learn how to follow them, stay quiet, and say, ‘thank you, Master?’” 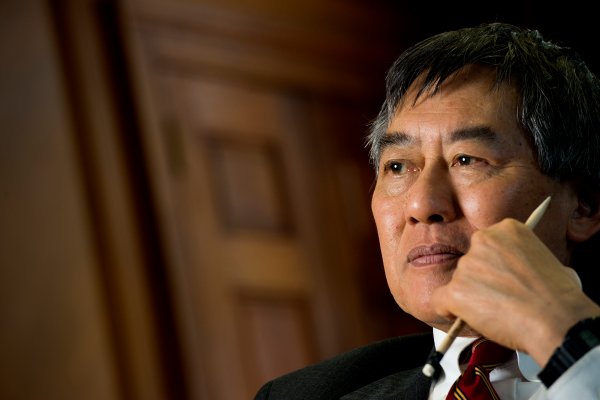 Wallace D. Loh: The Clash of Ideas Strengthens Our Universities—and Our Nation
Next Up: Editor's Pick