A key Republican lawmaker has called for President Obama to suspend admission of Syrian refugees into the U.S. in the wake of the Paris terror attacks, joining a growing chorus of similar calls from other Republican leaders.

In a letter to Obama made public Monday, Homeland Security Committee Chairman Michael McCaul wrote that he was “concerned that these resettlements are taking place without appropriate regard for the safety of the American people.”

“Our nation has a proud tradition of welcoming refugees into our country, but in this particular case the high-threat environment demands that we move forward with greater caution in order to protect the American people and to prevent terrorists from reaching our shores,” McCaul’s letter says.

A senior Obama Administration official said that it would move ahead on the plan to accept 10,000 refugees, noting that there are already stringent security measures in place which have been enhanced in the last few years to screen incoming refugees.

McCaul’s letter comes amid a blowback against Syrian refugees from some Republican leaders after Friday’s terrorist attack in Paris by ISIS that left more than 100 dead.

Sunday, former Florida Gov. Jeb Bush told CNN the United States should focus its efforts on accepting Christian refugees. Texas Sen. Ted Cruz echoed similar sentiments the same day, saying, “there is no meaningful risk of Christians committing acts of terror.” Kentucky Sen. Rand Paul said he is preparing a bill that would impose an immediate moratorium on visas for refugees from 30 countries.

“The national security of the American people demands that the Congress swiftly extinguish any programs that might allow an ISIS terrorist to infiltrate the United States disguised as a refugee or migrant,” Carson’s letter to McConnell reads.

And former Arkansas Gov. Mike Huckabee called on Ryan to block the entry of refugees, or else step down from his new post:

If @SpeakerRyan will not lead & reject the importation of those fleeing the Middle East he needs to step down today & let someone else lead.

These 2016 presidential candidates join a growing coalition of state governors vowing to block Syrian refugees from settling in their states, including Alabama, Arkansas, Louisiana, Michigan, Texas, Mississippi and Florida.

Speaking at the G20 summit in Turkey Monday, Obama directly responded to Bush, Cruz and others who would bar entry of the Syrian refugees.

“When I hear folks say that maybe we should just admit the Christians but no the Muslims, when I hear political leaders suggesting that there would be a religious test for which person who is feeling from a war-torn country is admitted, when some of those folks themselves come from families who benefitted from protection when they were fleeing political persecution, that’s shameful,” Obama said. “That’s not American. That’s not who we are.”

European officials have said one of the terrorists who participated in the Nov. 13 Paris attack that killed at least 132 people attacks was a Syrian citizen who entered the continent with refugees. 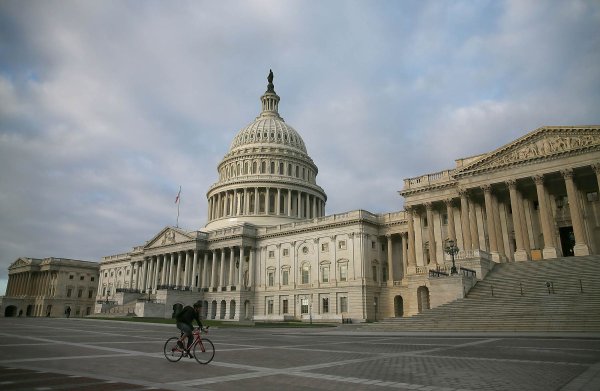