Why Child Care May Get More Attention in 2016

Children run a relay race during an event sponsored by co-hosted by MomsRising and the National Women’s Law Center to highlight the importance of affordable child care and early learning programs on Sept. 17, 2015.
Tom Williams—CQ-Roll Call/Getty Images
By Haley Sweetland Edwards

Child care, once consigned to the ghetto of liberal women’s issues, is earning newfound—and bipartisan—attention on the 2016 campaign trail.

During the Republican debate last week, Florida Sen. Marco Rubio dropped the remarkable fact that child care costs more than college tuition in 35 states. And today, the Center for American Progress, a popular source of policy ideas for Hillary Clinton and other Democrats, rolled out a new campaign, Within Reach, designed to keep the issue at the top of the national conversation at least until Election Day.

While Republicans and Democrats tend to have different solutions to the problem of increasingly unaffordable child care and preschool, Neera Tanden, the president of CAP, told TIME that we’re at a unique point where both sides are recognizing that it’s a problem.

“It’s much less polarizing today,” said Tanden, who worked on the issue during the Clinton administration. “I think that the reality is that middle class families are really feeling the squeeze. Wages have been stagnant, child care is one of costs that’s going up the fastest, and at the same time, we have all this data that’s coming out about how critical early childhood development is—how better off kids are and what a smart investment it is. You’re seeing a chorus of politicians recognize that.”

President and CEO of the Center for American Progress, Neera Tanden speaks on Sept. 17, 2015 in New York.
Neilson Barnard—Getty Images

Republican-led states, including Oklahoma and Georgia, have been among the first to pioneer universal, statewide preschool education, and in recent years, traditionally right-leaning business groups, like Chamber of Commerce, have supported efforts to buttress early childhood education and universal pre-K.

Rubio, who took some flack from his fellow Republicans during last week’s debate for freighting his tax reform proposals with family-friendly deductions, was also the first Republican candidate to propose a family leave plan. His would provide a 25% non-refundable tax credit for employers who offer their employees—new parents, those caring for a sick relative—up to $4,000 for between four and 12 weeks of paid family leave.

CAP’s Within Reach campaign will focus on promoting a suite of new policy proposals designed to help working families balance the dual and often conflicting obligations of work and family life, including paid family leave and universal preschool education.

At the center will be CAP’s plan to help pass a new, “high-quality” child care tax credit, designed to help working families defray the average annual price of daycare for infants. Under the CAP plan, the child care tax credit would be disbursed on a monthly basis directly to any child care provider that had been officially accredited by the state. The amount, which could reach as high as nearly $14,000 a year, would be higher for lower incomes. For example, a family of four at the lowest rung of the income ladder would be asked to contribute roughly $660 per year for daily child care—far below what they are paying today.

While the cost of child care varies dramatically by region, it tops $16,000 a year in some parts of Massachusetts. In California, parents pay on average $11,628 a year, and in Illinois it’s round $12,500, according to Child Care Aware of America.

“In the 1990s, conservative activists attacked policies like child care because they thought they were designed to make mothers leave the home instead of taking care of the kids,” Tanden said. “A decade and a half later, we haven’t done anything and women are working for economic reasons—that’s just a reality. So anyone who decries these policies begin to sound like they are out of touch with the modern American family. It’s not whether to do something about it. Now, it’s what we’re going to do about it.”

Read Next: This Is the Childcare Program Obama Was Talking About 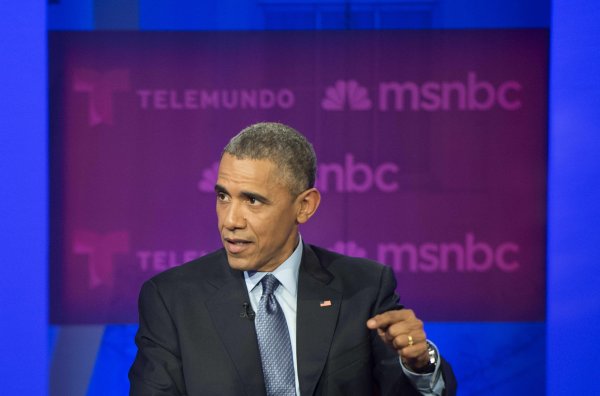 Obama Says Campaigning Against Trump Would Have Been 'Fun'
Next Up: Editor's Pick