All of humanity—or all but the darkest corners where poisonous ideology hides—is grieving along with the people of France for the tragedy they have endured. Indeed, that shared sorrow is not limited to just the seven billion of us on the surface of the Earth.

On Nov. 16, at 6 a.m. ET, the astronauts aboard the International Space Station, who were then passing 251 miles over the Pacific Ocean, paused for a moment of silence to honor the dead and injured in the Paris attacks. Work stopped all over the football-field sized station and in control rooms around the world, but orbital footage captured by fixed cameras show just three of the six crew members—Americans Scott Kelly and Kjell Lindgren, and Japan’s Kimiya Yui—in their period of reflection. Three cosmonauts in the Russian segment of the station observed the moment of silence too.

“We stand with the people all over the world that fight against terrorism for all of our common good,” Kelly said when the tribute was over.

“Station resuming normal,” responded the flight controller in Houston, in the clipped and efficient way things must always be done in the high-risk game of space travel. But on this day at least, the return to normal may be a while in coming. 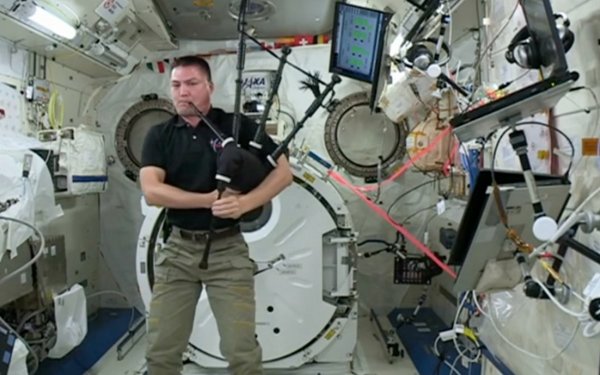 Watch an Astronaut Play Bagpipes in Space
Next Up: Editor's Pick