Shopper is seen using the new IPad Pro in the Apple store of the High-end shopping district of Omotesando in Tokyo, Japan on November 12, 2015.
Anadolu Agency—Getty Images
By Lisa Eadicicco

There are many differences between Apple products and gadgets that run on Microsoft’s Windows, but chief among them is one key idea.

Windows 10, the latest major operating system from Microsoft, is designed to run on laptops, desktops, tablets, and everything in between. The company has mixed mobile and desktop features into one experience, resulting in devices such as laptops with touch-sensitive screens and tablets in different size options that are designed to work with keyboard accessories.

Apple, however, maintains that the mobile world and the desktop environment should remain separate. That’s why iPad and iPhones run software that looks and feels different than Apple’s Mac OS X operating system. Apple CEO Tim Cook reiterated this idea once again when speaking with Irish news outlet Independent.ie.

“We feel strongly that customers are not really looking for a converged Mac and iPad,” he said to the publication. “Because what that would wind up doing, or what we’re worried would happen, is that neither experience would be as good as the customer wants. So we want to make the best tablet in the world and the best Mac in the world. And putting those two together would not achieve either. You’d begin to compromise in different ways.”

Although Cook doesn’t believe in mixing mobile software with desktop software, he does think the iPad Pro is powerful and versatile enough to replace a PC. He recently said he believes Apple’s biggest-ever tablet is a “replacement for a notebook or a desktop for many, many people.”

Microsoft, comparatively, is continuing to bet big on convertibles — i.e. computers that can function in both laptop and tablet mode. It recently unveiled the first laptop it’s ever built, the Surface Book, which features a touch screen that can detach from its base so that it can be used as a tablet. 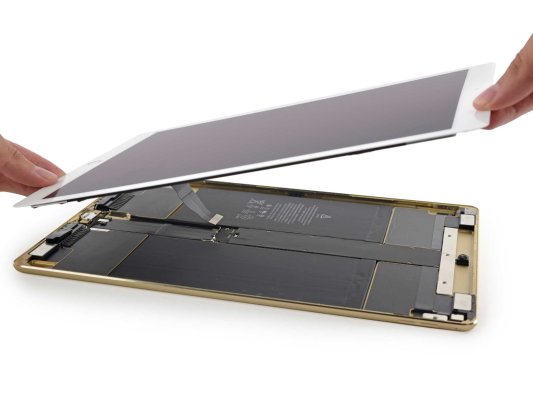 See What's Inside Apple's iPad Pro
Next Up: Editor's Pick