The Belgian Suburb at the Heart of the Paris Attacks Probe

The Brussels suburb of Molenbeek awoke to find their town under siege Monday morning as police arrested one suspect they say is strongly linked to the attacks in Paris and more than 100 officers encircled a second man, who barricaded himself in a four-story brick apartment building. Some residents reported hearing gunfire during the chaos.

While Molenbeek is no stranger to raids—this is the fourth police action on the Brussels suburb since the ISIS attacks on Friday in Paris that killed more than 130 and wounded hundreds more—the community’s street are usually quiet.

“These are people who just pass through here,” yells a man at a Belgian police officer up the street. “These extremists, they are not Molenbeek. To what end is this violence?”

As the siege wore into its second hour, a different kind of siege was happening half a kilometer away in the town’s Place Communale. Town leaders held a minute of silence in sympathy for the Paris victims at noon, encircling them than were more than 100 journalists from all over the world yelling sometimes hostile questions at them in several languages.

“Why is Molenbeek a hub of terrorism?”

“Why do so many refugees settle in Molenbeck? Can you say it’s safe?”

The small Brussels suburb across a canal from richer, more glamorous parts of Europe’s capital, has in recent years become home to the continent’s most disenfranchised and dangerous citizens, Europe’s “Achilles’ heel” as it has sometimes been called. They come, attracted to Brussels’ central location—just 90 minutes or less away from London, Amsterdam and Paris—and its anonymity. Brussels has little of the close circuit television and wire tapping surveillance that other European capitals have invested in, though after this week that may soon change.

“Almost every time there’s a link with Molenbeek,” Belgian Prime Minister Charles Michel said on Sunday. “We’ve tried prevention. Now we’ll have to get repressive. It’s been a form of laisser faire and laxity. Now we’re paying the bill.”

What does he mean by every time? Molenbeek has a sad and distinguished history with Islamic extremism. The town has had links to al-Qaeda and extremism from the early 1990’s when Bassam Ayachi, a Salafist and French Citizen, founded the Belgian Islamic Center here. Belgian extremists with links to Molenbeek were connected to the assassination of anti-Taliban leader Ahmad Shah Massoud in Afghanistan in 2001. Then one of the 2004 Madrid train bombers also had Molenbeek ties.

More recently, in May 2014, three people were killed and one injured in a shooting at the Jewish Museum of Belgium by alleged terrorist Mehdi Nemmouche, who is awaiting trial and spent time in Molenbeek. One of the perpetrators of the January attacks in Paris, Amedy Coulibaly, bought his arms from a Molenbeek arms dealer who was arrested and is also waiting trial.

In February, a Belgian court convicted Fouad Belkacem, the leader of the now defunct Sharia4Belgium group, and 44 of his disciples, for sponsoring terrorism. Blekacem is now serving 12 years in prison. Thirty-six of those convicted were tried in absentia as they are still at large. Later that same week, a shootout in Verviers in eastern Belgium as police raided a house where three suspected members of ISIS were planning a major attack in Belgium left two Molenbeek men dead. The plot’s suspected mastermind, also of Molenbeek, escaped: Abelhamid Abaaoud, whom French authorities said Sunday they believe also masterminded the Paris attacks.

And in August, Ayoub El Khazzani was stopped by three Americans and a Briton from attacking passengers on a packed high-speed train from Amsterdam to Paris. He had spent time in Molenbeek just before that attack.

Per capita, more Belgians have taken up arms in the Levant than any other country in Europe, an estimated 440 Belgians. That’s double the number per capita of France and four times that of the U.K., according to a report released in January by the International Center for the Study of Radicalization and Political Violence. Of those who have traveled to the Middle East and returned, an estimated 30 are in Molenbeek right now, the town’s mayor, Francoise Schepmans, told journalists on Monday.

The first inkling that the Paris attacks might have had a Molenbeek connection was the fact that one of the vehicles they used was a rental car from Brussels. French police then found a second car on Sunday used in the attacks abandoned in the Paris suburb of Montreuil, inside were Kalashnikovs and a Molenbeek parking ticket. Some seven people were arrested in four raids in Molenbeek on Saturday. On Sunday, French authorities said two of the attackers were French citizens who had been living in Molenbeek.

Much of the town’s 100,000 population is Muslim—from mostly Moroccan and Turkish communities. There are 24 official mosques and another 10 or so unofficial ones—so called foyer mosques for those whose prayers are generally a little more underground in their flavor. Molenbeek is home to refugees from more than 100 countries, says Schepmans, many coming from a massive complex dubbed “Le Petit Chateau” just across the canal from Molenbeek where the government houses new arrivals. Butchers advertise Halal meats and many shops only carry Arabic writing and signs. Monday’s raid took place across the street—number 40 Delaunoy—from one of the largest mosques in the quarter, al-Khalil, where more than 1,000 people pray daily.

“We need more surveillance and help from the federal government because we are not a community equipped to deal with these problems,” says Karim Majoros, Molenbeek’s adjunct mayor, sporting a pin common around the streets which says “Je suis 1080” in the same style as many of the “Je suis Charlie” pins. 1080 is Molenbeek’s zip code. “What’s happening now will have repercussions for the next generation who are watching how we handle this and are the most vulnerable for recruitment.”

Minutes later two loud booms could be heard from the police blockade down Rue Ransfort. Police were control detonating devices left on the street in the morning shootout. Within an hour, the standoff ended peaceably, though police did not immediately say who they have in custody. But for Molenbeek the end of the police siege did not mean the end of the siege of the town. 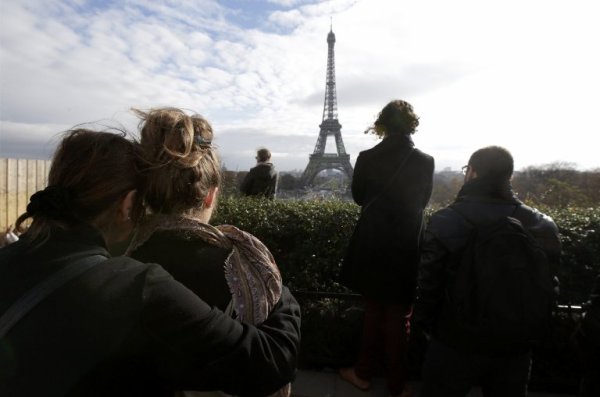 Mourners Across Europe Observe Minute of Silence for Paris
Next Up: Editor's Pick