With Paris struggling to recover on the second day of national mourning, French and Belgian security forces continued an intense manhunt Monday for suspects connected to attackers who killed 129 people in the French capital Friday night. French Interior Minister Bernard Cazeneuve told reporters that in a massive sweep overnight, police had conducted 168 raids and placed 104 people under house arrest. “No part of the Republic is being neglected in the maximum level of alert,” he said.

And on Monday a French official named Abdelhamid Abaaoud, a Belgian man, as one of the masterminds behind Friday’s massacre, who was also reportedly implicated in the foiled attack on the high-speed Thalys train between Brussels and Paris in August, which was stopped when three American passengers wrestled the gunman to the ground. He is believed to be in Syria.

An undated image, which was obtained by the Associated Press from Islamic State's English-language magazine Dabiq, shows Abdelhamid Abaaoud.
Militant Publication via AP

The flurry of activity came amid a significant escalation of French airstrikes in Syria targeting the militant group Islamic State of Iraq and Greater Syria (ISIS), which has taken credit—a claim believed to be credible by Western officials—for one of the deadliest attacks in Europe since World War II. Details of the investigation and possible intelligence breakdowns continued to trickle out, as the bloodshed put renewed scrutiny on Europe’s handling of the growing migrant crisis. France held a moment of silence Monday morning to honor the victims of the attacks.

This is what we know so far about the other suspects:

1. Omar Ismaïl Mostefaï, 29. Born in Courcouronnes south of Paris, of an Algerian father. He had several petty crime convictions between 2004 and 2010, but was never jailed. He recently lived in Chartres, 60 miles south of Paris, but had not been seen since about 2013, according to those who prayed with him at a local mosque. Paris prosecutor François Molins said he was “a radicalized person with a security report,” but with no confirmed links to a specific terrorist organization. He was one of the four suicide bombers who stormed the Bataclan concert hall and massacred people inside. Police identified his fingerprint from a severed digit inside the Bataclan theater, and took seven of his relatives into custody for questioning.

DEAD: He blew himself up inside the Bataclan.

2. Samy Amimour, 28. French citizen from the suburb of Drancy in northeastern Paris. One of the suicide bombers of Bataclan. Interpol issued an international arrest warrant for Amimour in 2012, after he slipped out of sight, in violation of a judicial order issued that same year by French authorities. Amimour was under surveillance for suspected jihadist involvement. Relatives told the news agency AFP on Monday that he had gone to Syria two years ago

DEAD: Blew himself up inside the Bataclan theater.

3. Salah Abdeslam, 26: French citizen born in Brussels in 1989. He was one of two French brothers police believe were involved in the attacks. He rented a black VW Polo that transported four suicide bombers to the Bataclan. On Saturday French police stopped his car on the road between Paris and Belgium in a routine check; he was with a Moroccan and a Belgian man, but the police let them go. He was later identified through a parking ticket left in the Bataclan wreckage, leading to the manhunt in Belgium.

4. Ahmad al-Mohammad, 24 or 25. Syrian citizen, born in Idlib in 1990. One of the suicide bombers who blew himself up at France’s national stadium, the Stade de France, on the northeast edge of Paris, during a France-Germany soccer match. He was carrying a Syrian passport. On Monday Paris prosecutor François Molins said that the passport was authentic, and that the attacker’s fingerprints matched that of a man whom Greek officials say they registered, when he landed on Leros island on Oct. 3, on a smuggler’s boat, amid the huge influx of refugees into Europe.

DEAD: He blew himself up outside the stadium.

5. Bilal Hadfi, 20. Lived in Belgium. One of the suicide bombers at the national stadium. On Monday French television showed a photo of Hadfi holding up his index finger, lounging against floor cushions with a rifle over his shoulder, in black cargo pants and striped shirt.

DEAD: Blew himself up outside the stadium

DEAD: Blew himself up outside the Comptoir Voltaire café on Boulevard Voltaire in eastern Paris on Friday night, where there were no victims.

7. Mohammed Abdeslam: Third brother of Brahim and Salah. Still unclear what his involvement was in Friday night’s attacks.

RELEASED: Belgian police released him Monday. His lawyer told Belgian media that her client hadn’t made the same choices in life as his brothers. 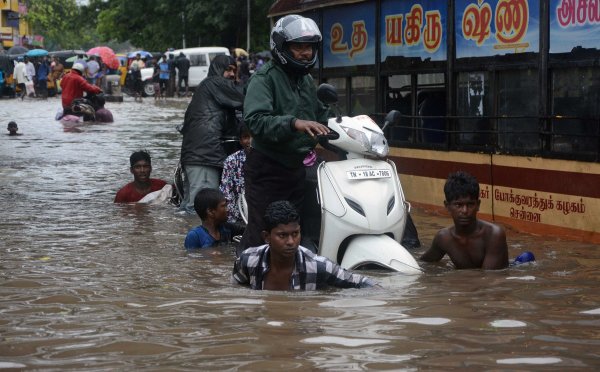 Flooding Kills Dozens in Southern India
Next Up: Editor's Pick