Anti-Terrorism Raids Launched Across France in Wake of Paris Attacks

French police launched scores of raids across the country on Sunday night in pursuit of suspected terrorists following Friday’s attacks in Paris that claimed 129 lives and wounded hundreds.

In Lyon, French news station BFM TV, cited by the Guardian, reported police as saying that they had found a “war arsenal” of weapons including a rocket launcher, pistols and a Kalashnikov assault rifle.

Local media sources reported raids in and around the southern cities of Grenoble and Toulouse; in Jeumont, along the France-Belgian border; in Calais, home to a major ferry port; and in Bobigny, a suburb around 6 miles northeast of central Paris.

The nation’s prime minister Manuel Valls said there had been 150 raids in all, according to Associated Press.

In Grenoble—where, in June, a Muslim van driver who had previously been investigated for alleged links to jihadism beheaded his employer—police arrested more than six people and seized money and weapons in a raid that began around 1 a.m. local time, Le Dauphine Libéré reported. At least three people were arrested in Toulouse.

Authorities sealed off a street and searched a home in Jeumont, but have not yet reported any arrests, according to L’Observateur.

The primary suspect in Friday night’s attacks is 26-year-old Salah Abdeslam, a “dangerous individual” who remains at large after stopping at the France-Belgium border on Saturday. 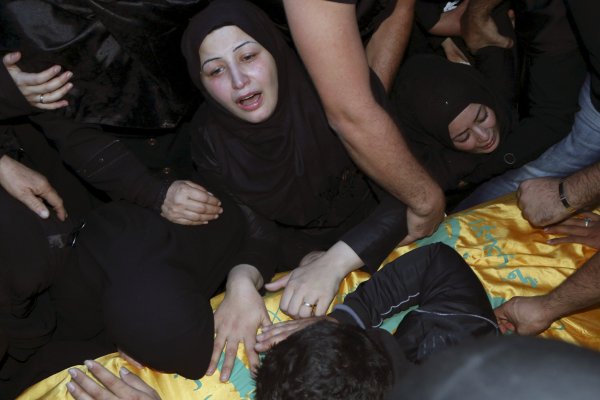 Nine Suspects in Beirut Bombing Arrested
Next Up: Editor's Pick