America has always had a complicated relationship with our athletes. When it comes to Game Day, athletes are warriors whose acrobatic actions on the court or field are revered by millions, emulated by children, lionized in living rooms and bars. Their faces are on clothing, their likenesses on video games. But when it comes to Election Day, or any other day that involves expressing personal opinions about social or political issues, athletes are relegated to a locker room ghetto and told to keep their politics as private as a jock strap. Financially, mixing sports and politics is bad for business. Fans want to indulge in the escapism of the sport without the heavy baggage of real life interfering.

Despite the fact that I’ve been writing about politics longer than I played basketball, many of my critics begin their comments with, “Stick to basketball, Kareem.” But aside from having played basketball a couple decades ago, I am also a father, a businessman, an education advocate, a journalist, a charity organizer, a huge sports fan and an American. By dismissing someone’s opinions based on profession, such critics are also dismissing their own opinions as frivolous (“Stick to plumbing!” “Stick to tax dodging!” “Stick to proctology!”). Whose vocation makes them an expert on all social or political matters? As we’ve seen during the presidential campaign, even the candidates aren’t experts. Perhaps especially.

The conventional wisdom seems to be that athletes should never step outside their roles as entertainers to pontificate. That attitude is a stereotype of the dumb jock who is too busy jamming smart, adorkable kids into lockers to know anything about the world around them except what Coach tells them.

Those days are over, folks.

The 30 football players from the University of Missouri whose threat to boycott their season forced the resignation of the school’s president, who had insufficiently addressed racial issues on campus. Their actions had had a ripple effect across American campuses, from Amherst to Yale to Claremont McKenna. The shame is that until Missouri’s football boycott threatened to cost $1 million in default fees, University officials had been impassive.

But the University of Missouri football players are just the latest in a string of high-profile athlete activism. Last November, five players from the St. Louis Rams took the field in a “Hands up, don’t shoot” gesture to protest the shooting of Michael Brown in Ferguson. The next month, LeBron James, Kyrie Irving and other NBA players wore “I Can’t Breathe” shirts before a game. In the few days since the attacks in Paris, Green Bay Packers quarterback Aaron Rodgers won support for condemning a fan who shouted “Muslims suck.”

For some, the athlete as activist is a welcome evolution of using status for platform. For others, it’s a sign of End Times, Sports Edition, in which athletes have shattered the fourth wall of sports theater. What if, now that athletes have found their voice, they won’t shut up? The genie is out of the locker and no amount of Ace bandages will bind him back to muteness.

Governments have long used athletes as positive PR for foreign policy. In 1971, the U.S. Table Tennis Team’s friendly exchange with the Chinese team at the 31st World Table Tennis Championships became known as Ping Pong Diplomacy because it softened relations between the U.S. and China, creating an atmosphere that allowed President Nixon to make his historic visit to Beijing in 1972. In 1980, the U.S. and 59 other countries boycotted the Summer Olympics in Moscow to protest the Soviet Union’s invasion of Afghanistan. In retaliation, the Soviet Union led 13 other countries in boycotting the 1984 Summer Olympics in Los Angeles.

When countries use athletes to promote policy, the athletes are given little choice. But when athletes wish to stand up for causes they personally believe in, they are often condemned. Muhammad Ali learned that lesson in 1967 when he refused to be drafted into the Vietnam War on religious grounds and was convicted of draft evasion and stripped of his heavyweight champion title. Despite the verdict being overturned by the U.S. Supreme Court, Ali lost four years of boxing bouts—and millions of dollars. Ali’s sacrifice inspired me to boycott the 1968 Olympic basketball team to call attention to the rampant racial injustice of the time, which resulted in people calling me “un-American.” (Ironically, in 1980, athletes who complained about the Olympic boycott were also called un-American.) Some black athletes who participated in the 1968 Summer Olympics chose to use it as a platform to make the same statement I did. Gold medalist Tommie Smith and bronze medalist John Carlos, both African Americans, raised black-gloved fists in the air during their 200-meter race medal ceremony in a Black Power salute. “We were not Antichrists,” Smith said. “We were just human beings who saw a need to bring attention to the inequality in our country.”

Forty-seven years later, that’s what these athletes are doing. Adding their voices to the national conversation on racial disparity. If sometimes they need to flex their power a little to be heard, well, they’re just following in the same tradition as their government. Democracy is not a solo concert; it’s a choir of voices blending to create a beautiful sound. Sure, there’s a discordant note now and then, someone gets aggressively pitchy, but even those sounds help the rest of us harmonize. We are hearing the voices of these brave athletes and it is beautiful.

Correction: The original version of this article misstated the location of the Soviet Union invasion in 1980. It was Afghanistan. 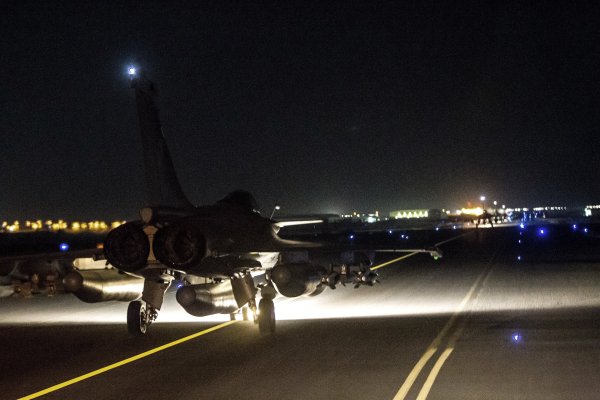 Force Against ISIS Is the Wrong Tactic
Next Up: Editor's Pick