Following Friday’s attacks in Paris that killed at least 132 people, a new debate has erupted inside the U.S. government over the weekend: Should Washington step up its military offense, alongside NATO and perhaps even Russia, to destroy ISIS, before ISIS attacks the U.S.? Or should it double-down on defense, relying on increased intelligence, drone strikes and new barriers to immigration to thwart attacks on the homeland?

Any revamped strategy will involve elements of both, largely because defeating the Islamic State of Iraq and Greater Syria is going to take years and require both offensive and defense tactics.

Over the weekend, calls mounted in France—and from a former NATO commander—to seize the offense against ISIS, which French leaders blamed for the Paris attacks. ISIS also has taken responsibility for recent attacks on a Russian airliner over Egypt, and in Beirut, that have killed hundreds more. But the U.S. response, once beyond the rhetoric, has been relatively muted.

“We will redouble our efforts,” President Obama said Sunday in Turkey. Defense Secretary Ashton Carter spoke Sunday with French defense minister Jean-Yves Le Drian for a second time since the attacks. The two “agreed on concrete steps the U.S. and French militaries should take to further intensify our close cooperation in prosecuting a sustained campaign against ISIL,” Pentagon press secretary Peter Cook said in a statement, using another acronym for ISIS. The goal is “to ensure ISIL is dealt a lasting defeat.” But he offered no generalities, never mind specifics, about any “concrete steps.” More importantly, any greater action against ISIS won’t come from defense chiefs, but their nation’s leaders.

Read more: What Real War With ISIS Would Mean

Likewise, the three Democratic presidential contenders put forward few specifics on how to grapple with the growing ISIS threat at their debate Saturday night. Republican candidates said little more. “We need to immediately declare a halt to any plans to bring refugees that may have been infiltrated by ISIS to the United States,” Texas Sen. Ted Cruz said. “We need to redouble our efforts to prevent ISIS agents from penetrating our nation by other means.”

South Carolina Sen. Lindsey Graham offered the most specifics—but is polling so poorly he didn’t even make it into last Tuesday’s GOP undercard debate. He called for deploying an army of up to 100,000 troops—10% of them American—to “destroy [ISIS] in Syria and hold the ground” so the Islamic State couldn’t re-establish itself there.

Some local officials in France were furious over the Paris attacks and French leaders’ seeming inability to deal with the attackers. “How many deaths will occur before our political leaders understand and take action?” Mayor Jean-Pierre Gorges of Chartres, 60 miles south of Paris and one-time home to one of the attackers, posted on Facebook.

James Stavridis, a retired U.S. Navy admiral who served as NATO’s top commander from 2009 to 2013, said the alliance should go to war to defeat ISIS. “The Islamic State is an apocalyptic organization overdue for eradication” by NATO’s 3 million troops, 25,000 aircraft and 800 warships, he wrote Saturday in Foreign Policy. “There is a time for soft power and playing the long game in the Middle East, but there is also a time for the ruthless application of hard power.”

In the U.S., partisan politics has gotten in the way of gaining a clear-eyed view of the problem. Democrats blame President George W. Bush for incubating ISIS with his invasion of Iraq. But they ignore Obama’s haste to withdraw all U.S. troops from that country, giving ISIS room to grow. And while Republicans like to mention Obama’s disinclination to fight for a continued U.S. troop presence in Iraq after 2011, they overlook the failure of Bush’s post-invasion policy that helped sow the seeds for ISIS’s rise.

Such politicization has led to polarization, which in turn has contributed to a paralysis of optimism. Last Thursday, a day before the Paris attacks, Obama declared ISIS “contained” thanks to his Administration’s military strategy. “I don’t think they’re gaining strength,” he told ABC. There also has been a peculiar debate inside U.S. intelligence circles about the control that ISIS headquarters in Raqqa, Syria, exerts over its followers in Egypt, France and elsewhere around the world. Absent direct command-and-control links, the thinking goes, the U.S. and other nations only need concern themselves with “lone wolves.” But such thinking suggests that victims killed on orders from ISIS leaders are less dead than those whose killers were merely inspired by them.

The latter, of course, could prove tougher to eliminate, and therefore ultimately more deadly.

Read Next: The Democratic Debate: Incoherent on ISIS 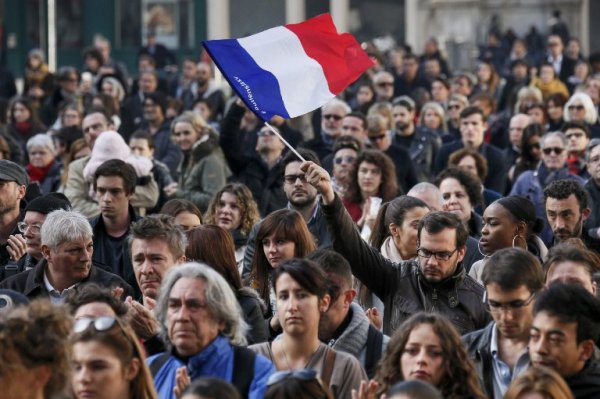 France Strikes ISIS Targets in Syria
Next Up: Editor's Pick