A prohibitive frontrunner in the current Democratic nomination polls, Hillary Clinton arrived at her second debate Saturday aiming to prove that she had another advantage over the two candidates standing next to her on stage: Rank.

Time and again, the former Secretary of State claimed superior knowledge and experience than Vermont Sen. Bernie Sanders and former Maryland Gov. Martin O’Malley. She condescended regularly and dismissed casually. Her point, though she never it explicitly, seemed to be that they were just not playing in the same league.

The effort started early in the two-hour exchange, after both rivals criticized her handling of the Middle East and her vote to authorize the 2003 Iraq War, a decision she has since said she regrets. Her response was to condescend to the alternative visions they put forward.

“I think we’ve got to understand the complexity of the world that we are facing,” she said, in a clear suggestion that her rivals did not. “No place is more so than in the Middle East.”

At times, Clinton took on the role of fact checker, methodically calling out errors or slips by her rivals to underscore her own knowledge.

When Sanders called for regional powers, including Jordan, to get more involved in the fight against the Islamic State in Syria, she countered. “That is very unfair to a few you mentioned, most particularly Jordan, which has put a lot on the line for the United States, has also taken in hundreds of thousands of refugees from Syria.”

When O’Malley called for more American investments and sustainable development aid in troubled parts of the world, Clinton pounced again, citing her own experience. “I think it’s perfectly fair to say that we invested quite a bit in development aid,” she said. “Some of the bravest people that I had the privilege of working with as Secretary of State were our development professionals.”

Minutes later, when O’Malley suggested that liberal economist Alan Krueger was an “economist on Wall Street,” Clinton interrupted him immediately. “He’s not Wall Street,” she said. “That’s not fair.” Krueger, who teaches at Princeton University, served with Clinton in the Obama Administration.

At several other points, Clinton argued that her policy plans were more extensive and nuanced than her rivals, suggesting once again their inexperience and naivete. “I want to look at the whole problem and that’s why my proposal is much more comprehensive than anything else that’s been put forth,” she said about her plan to regulate the financial sector.

She followed with another note of condescension, positioning herself as a bulwark of rationality against emotive newcomers. “I have nothing against the passion that my two friends here have about reinstating Glass-Steagall,” she said, referring to a repealed law that once separated investment and commercial banking. “I just don’t think it would get the job done.”

At the end of the debate, CBS News moderator John Dickerson gave Clinton one more opportunity to make her point. He asked each of the candidates to name a crisis they had experienced in their life that prepared them for the presidency. “Well, there are so many, I don’t know where to start,” Clinton responded, before retelling the story of her advising President Obama in the decision to launch a mission to kill Osama bin Laden.

Her rivals could not match her. “I don’t think that there is a crisis at the state or local level that really you can point to and say, therefore, I am prepared for the sort of crises that any man or woman who is commander in chief of our country has to deal with,” O’Malley admitted.

Sanders, meanwhile, spoke about the challenge of negotiating a Veterans Administration reform bill with Republicans. But his was a tale of defeat as much as victory, an odd choice for a candidate promising revolution. “The crisis was I lost what I wanted,” he said. “But I had to stand up and come back and get the best that we could.”

And with that, the debate ended right where Clinton wanted it. 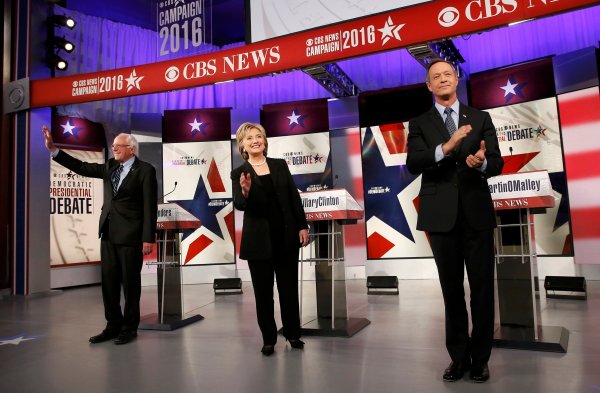 Republican Candidates React on Twitter to Democratic Debate
Next Up: Editor's Pick