Former Secretary of State Hillary Clinton invoked the terrorist attacks of September 11, 2001, to defend herself against the charge that she was too close to Wall Street, in a rare misstep for the Democratic front-runner.

Coming amid a contentious back-and-forth with Vermont Sen. Bernie Sanders over the role of corporate influence in the political process, the former New York Senator responded to the allegation that she was too soft on the financial sector that makes up a large portion of her campaign donations by pointing to the need to respond to the 2001 attack.

“I represented New York, and I represented New York on 9/11,” Clinton said. “When we were attacked, where were we attacked? We were attacked in downtown Manhattan, where Wall Street is. I did spend a whole lot of time and effort helping them rebuild. That was good for New York. It was good for the economy. And it was a way to rebuke the terrorists who had attacked our country.”

The response was reminiscent of former New York Mayor Rudy Giuliani’s frequent invocation of the attacks during his failed bid for the 2008 Republican nomination. Clinton has taken in millions for her campaigns from the financial industry over 16 years in elected office, and even more when her husband’s campaigns are factored in.

The striking exchange was an unforced blunder by Clinton, in a debate in which her record as Secretary of State came under scrutiny from rivals in her own party, and exposed potential lines of attack for Republicans in a general election match-up.

“Why do they make millions of dollars of campaign contributions? They expect to get something. Everybody knows that,” Sanders had argued, precipitating Clinton’s comments.

Later in the debate, Clinton seemed temporarily flummoxed after CBS’s Nancy Cordes turned to a question from Twitter raising alarm about Clinton’s use of the 9/11 to deflect from a question about campaign finance.

“I’m sorry that whoever tweeted that had that impression,” Clinton said after brief pause. “Because I worked closely with New Yorkers after 9/11 for my entire first term to rebuild, and so yes, I did know people. I’ve had a lot of folks give me donations from all kinds of backgrounds say, ‘I don’t agree with you on everything, but I like what you do, I like how you stand up, I’m going to support you,’ and I think that’s absolutely appropriate.” 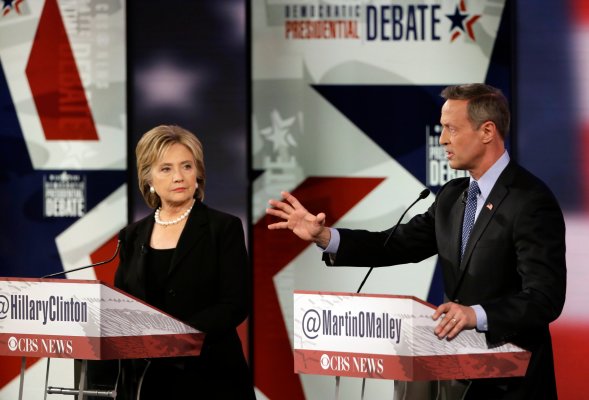 Here's Where the Democratic Candidates Want to Set the Minimum Wage
Next Up: Editor's Pick