Iraq Vet: What Real War With ISIS Would Mean

The news alert for the Paris attacks came across my phone as I was about to officiate the marriage of my friend Sean, a veteran of multiple tours in Iraq whom I’d fought alongside in Afghanistan. We had just finished the last rehearsals and Sean’s small wedding party began to gather. The groomsmen, a rank of veterans in rented tuxedos, arrayed themselves on the crest of a bluff overlooking the evergreen studded ridge lines surrounding Carmel Valley, Calif. Nobody wore a uniform. We were civilians now, and ready to be. After the exchange of vows and recessional we gathered at a few outside cocktail tables. I could see people checking the headlines between toasts, but nobody spoke openly about the attacks. We didn’t want the war to cast a shadow over the day. This wedding was a celebration of love but also a celebration of Sean’s moving on. Away from wars.

No such moving on has occurred for the Islamic State of Iraq and Greater Syria (ISIS). In a little over a month it has claimed credit for three major attacks: the Ankara bombing that killed 102 in Turkey, the Metrojet flight that killed 224 Russians, and now the Paris attack that has killed 129 in France. If the Islamic State were treated as an actual state, these attacks would be considered acts of war. But the Obama administration and other governments refuse to classify ISIL, or ISIS, or Daesh as anything other than a terrorist organization, the logic being that statehood status conveys a legitimacy not deserved. The attacks in Paris offer the West an opportunity to strike at the Islamic State’s greatest vulnerability: the very statehood it aspires to.

When it claimed nation status, the Islamic State forfeited the insurgent’s advantage: it gave itself form. We have done little to take advantage of our adversary’s new shape. We continue to refer to it as ISIS or ISIL, not embracing the idea that statehood does not legitimize this organization but rather makes it vulnerable to destruction in a way that its precursor, the shadowy al-Qaeda in Mesopotamia, never was.

On Saturday morning, when speaking to the Italian Bishop’s Conference, Pope Francis referred to the Paris attacks as being part of a “piecemeal Third World War.” By elevating the conflicts in Iraq and Syria into a world war, the Islamic State invites a coalition to form against it. Nations such as Turkey, France, Russia, and of course the U.S. possess unmatched capabilities to launch conventional military campaigns which could swiftly retake cities such as ar-Raqqah, Ramadi, and Mosul. To date, our strategy to counter the Islamic State has consisted of airstrikes combined with the use of surrogate forces, and the targeting of organizational leadership. It’s not working.

Targeted killings might serve as a standalone strategy when attacking a traditional terrorist organization, but they serve only a complimentary role when trying to degrade the capabilities of a state. Just before the Paris attacks the U.S. military reported the likely death of “Jihadi John,” the Islamic State’s infamous executioner, while simultaneously announcing the expansion of air strikes against oil production facilities. This announcement did nothing to deter the attack. Nor did the May 16 strike which killed Abu Sayyaf, the Islamic State’s chief administrator of oil production, do anything to degrade production capability. A strategy relying on the targeted killings without operations against its military forces is akin to trying to defeat the Germans in World War II by killing select generals instead of meeting their army on the battlefield. It won’t work.

Though analogies to World War II might seem anachronistic, they are unusually apt when considering a current diplomatic and military strategy. Until now, the air war has had no profound effect on the Islamic State, and the surrogates employed by the West, namely the Kurds and Iraqi Security Forces, have not proved themselves capable of retaking significant territory. Only a competent, modern, and highly trained force can accomplish this task. As reluctant as we all are to recommit significant numbers of ground troops into Iraq and Syria, attacks like those we’ve seen recently will continue until the Islamic State is dismantled.

They’ve offered us, if we so chose, the opportunity to assemble a coalition. As in World War II, a coalition will likely include partners—such as Iran and Russia—which have different long-term regional interests than ours. Regardless, the U.S. has historically shown sufficient leadership to negotiate these nuances when the broader fight is against a common adversary. We can show such leadership again.

Even if the Islamic State is defeated on the battlefield, its radical ideology will not vanish. A large-scale ground intervention in Iraq and Syria would include a post-conflict phase which, if not handled properly, could look much like the post-invasion Iraq of the last decade. Although we would enter into such a phase with certain advantages—a regional knowledge honed over the past decade of war, and the possibility of a stronger multi-national coalition—are we prepared for such a recommitment?

When I served with Sean in the Marines we had a saying: “Nothing is more dangerous than a gentle surgeon.” The Paris attacks illustrate that gentle measures—a limited commitment of ground troops, a refusal to work closely with the Iranians and Russians, respecting the border between Iraq and Syria while the Islamic State does not—will only prolong the conflict, ensuring we remain vulnerable.

Sitting down to dinner after the wedding, I struggled not to check the developing headlines on my phone. I wanted to celebrate my friend. Every veteran there that night, I know, wanted to be what we’d become: a professor at Stanford, a software engineer, a small business owner. Yet many of us, including Sean, still serve in the reserves. So we are also: a Marine Raider, a platoon sergeant, an infantry officer. For those of us who might return to active duty, what does Paris mean?

As the dancing wound down and the wedding cake was eaten I found Sean. He hadn’t stopped smiling the whole night. I told him that I was heading back to my hotel, and he gave me a hug. After thanking me for coming, he grasped my hand. “Love you, brother. Be safe.” This is what we used to say before heading out on a mission. Hearing it on his wedding night felt like a punch to my stomach. I guess Sean had checked the headlines.

Elliot Ackerman served five tours in Iraq and Afghanistan, received the Silver Star, the Bronze Star for Valor, and the Purple Heart, and is the author of Green on Blue. 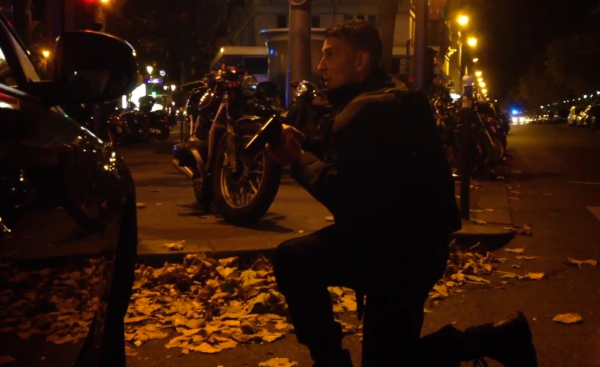 Exclusive: Footage of Paris Firefight Caught on Video
Next Up: Editor's Pick