iPad Pro Review: The Best Computer Apple Has Ever Made

The good: Breakthrough accessories, powerful processor, gorgeous screen
The bad: Gets expensive fast, really big, iOS 9 needs work
Who should buy it: Students and creatives especially; frequent travelers and people who need to mutlitask on the go
Bottom line: The iPad Pro is best computer Apple has ever made

Apple’s recently released iPad Pro is a lot of things: It’s a really big iPad that does everything its predecessors have and then some. It’s an elegant piece of industrial design, which will come as a shock to absolutely no one. It’s a powerful computer with chips that eclipse most conventional laptops in speed. And it’s host to a range of new Apple accessories, some expected and some surprising.

But after using it consistently for work and play, I’m convinced it’s one thing in particular: The iPad Pro is the best computer Apple has ever made. Not the fastest. Not the most portable. And certainly not right for everyone. But, considered as a whole, this version of the iPad achieves the best balance between traditional computing and the places mobile devices like smartphones and tablets seem to be inevitably taking us in the future. It’s a remarkable piece of technology anybody considering buying either a tablet or laptop computer should consider seriously.

The iPad Pro comes in several version starting at $799 for a model with 32GB of internal storage and Wifi connectivity, rising to $1,079 for a model with 128GB as well as Wifi and Cellular connectivity. That’s expensive and, once you factor in the cost of accessories, you can get just above the price of an entry-level MacBook.

This iPad is big, almost ludicrously so at first encounter. The device is built around a 12.9-inch, high-resolution touchscreen that provides a viewing area the size of two “normal” size iPads side by side. It’s thin (0.27-inches) and weighs a little over a pound and a half. You get used to it pretty quickly: after a day or two, my iPad Air 2 started to look too small in contrast. But the dimensions can make it awkward to hold with one hand, especially in portrait orientation. With an iPad Air, portrait feels like the natural way to hold the device, while the iPad Pro felt most comfortable to me in landscape.

Size matters, in this case, for what it allows you to do. First and foremost, the additional screen real estate—it’s 2732-by-2048 pixels—lets the device take advantage of productivity improvements Apple built into iOS 9, the company’s mobile operating system. Features called Slide Over and Split View allow you to run multiple applications at once, dividing the screen according to your needs. I found this worked particularly well when writing or editing a document in a main window while keeping track of conversations in Slack or Messages to the side.

There are other advantages. Movies streamed from iTunes and HBO Now, for example, as well as the variety of games I tried looked fantastic on the bigger display. The higher resolution means webpages frequently render in their entirety. Apps like iMovie, Apple’s film editing software, shine in particular because they become much more useful. The preview window in iMovie, for instance, only takes up a small portion of the screen but is still displaying in 1080p.

A lot of this is made possible by the iPad Pro’s internal components. Apple says the A9X processor inside the device is “desktop class,” a.k.a. as or more powerful than many traditional computers, but also power efficient, providing 10 hours of battery life. Benchmarks have shown the A9X is indeed both, and day-to-day use confirmed as much for me. Battery life was excellent as well, just shy of Apple’s estimates when used for web browsing and watching video.

This iPad brings with it two new Apple accessories. The Smart Keyboard is a $169 magnetic cover that integrates a full set of keys inside a folding cover. In my experience it worked well, and I was especially thankful not to have to recharge it. Apple powers it through a new port built into the side of the iPad. I’ve never been bothered by keyboards that don’t have a lot of travel (i.e. keys that don’t press down very far) so I found it comfortable to use. Your mileage may vary.

More interesting is the Apple Pencil. This device—don’t call it a stylus—works in tandem with the display technology in the iPad Pro to allow you to write or draw on the screen without much latency. This works and became surprisingly natural, surprisingly quickly. I used it mostly to take notes and to doodle. But when I let some of TIME’s graphic designers play with the device, they were impressed. Apple is pitching this new iPad as a potential game-changer for creatives and, the small sample size notwithstanding, the creatives I work with seem to concur.

The iPad Pro is not perfect. Many apps have yet to be optimized for the larger display and, as a consequence, either look ugly or bizarrely spartan. Some games inexplicably wouldn’t run for me. These are likely temporary conditions that will be addressed as developers update their apps. More distressing are a series of small but annoying inefficiencies in iOS 9 that are a drag on the overall experience. Scrolling through webpages on a desktop Mac, to take just one example, is well calibrated—pages move to give you a small overlap in what you were reading. iOS 9, by contrast, doesn’t handle this very well. Sometimes the on-screen keyboard—which is full-size on the iPad Pro—came up despite having the external keyboard plugged in and then later disappeared inexplicably. Some ways of selecting text are counter-intuitive when you have Split View enabled. None of these are major flaws, but I hope Apple addresses them in future software updates.

Apple’s tablets are a pleasure to use for two reasons: the software frequently obscures the unnecessary and touch provides an immediacy normal laptops—even so-called convertibles—don’t have. I found this to be the case with the new iPad. But I also found I could do a lot more with it than versions past, namely work on it. I found I prefer the proximity and intimacy of a touchscreen paired with a keyboard, than a regular MacBook. (Because there is no trackpad, the iPad Pro ends up sitting three or four inches closer to you.) And, for my needs at least, I concluded that the iPad Pro is powerful and versatile enough to replace my laptop. 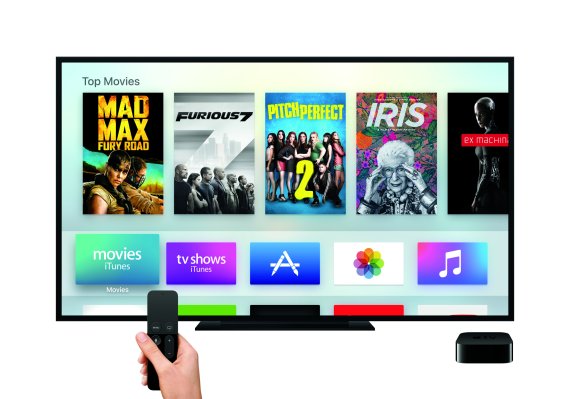 Apple TV Review: What it's Like Using the Gadget Apple Says is the Future of TV
Next Up: Editor's Pick