By Olivier Laurent and Francesca Trianni

Award-winning photographer Patrick Zachmann of Magnum Photos was on Republique Square in the center of Paris when he saw police cars and fire trucks speed by. “I knew something was strange,” he tells TIME in an interview. “I immediately thought of a terrorist attack.”

In a career spanning four decades, Zachmann has covered everything from the 1989 Tiananmen Square showdown to the violent Neapolitan crime world. So when he heard the sirens echoing across Paris’ quiet streets, he instinctively followed a police car down Boulevard Voltaire toward the Bataclan concert venue – where at least 89 people are now believed to have lost their lives in the carnage.

Facing the corner of Passage Saint-Pierre Amelot, where the Bataclan is situated, Zachmann hid behind an unmarked police car, took his iPhone out, and started photographing and filming as police attempted to end Friday night’s siege. He shared the footage with TIME, which can be seen above.

A Timeline of Recent Terrorist Attacks in Europe

“I heard the shootings from a Kalashnikov,” he says. “In the videos, you can actually see the sparks [from the bullets hitting the ground].”

Zachmann could sense the fear and nerves of the police officers around him, he says. “It was panic. You felt that it was not under control, that they didn’t know what was going on, from where exactly [the terrorists were] shooting.”

At one point, a police officer joined Zachmann behind the parked car. Holding a pistol, the officer advised the photographer to move slightly to the left to use the car’s wheels as protection from potential strayed bullets.

“He seemed tensed, very concentrated,” Zachmann says. “I could feel his fear. I could feel that maybe he was not used to this situation. They are trained, but maybe it was the first time he was on [such] a scene. But there was a kind of complicity [between the two of us]. He could have asked me to leave, but he let me [stay] there.”

The city has already started to mourn, lighting candles on Republique Square in scenes that are reminiscent of how Paris came together after the January attacks. “But [you can’t] compare,” says Zachmann. “During the Charlie Hebdo attacks, it was such a shock for the French people… Today, we’re not in this mood. It’s after Charlie. We know that we are in a war. Far away, in Syria, but also inside. Even in France, we are in a war.” 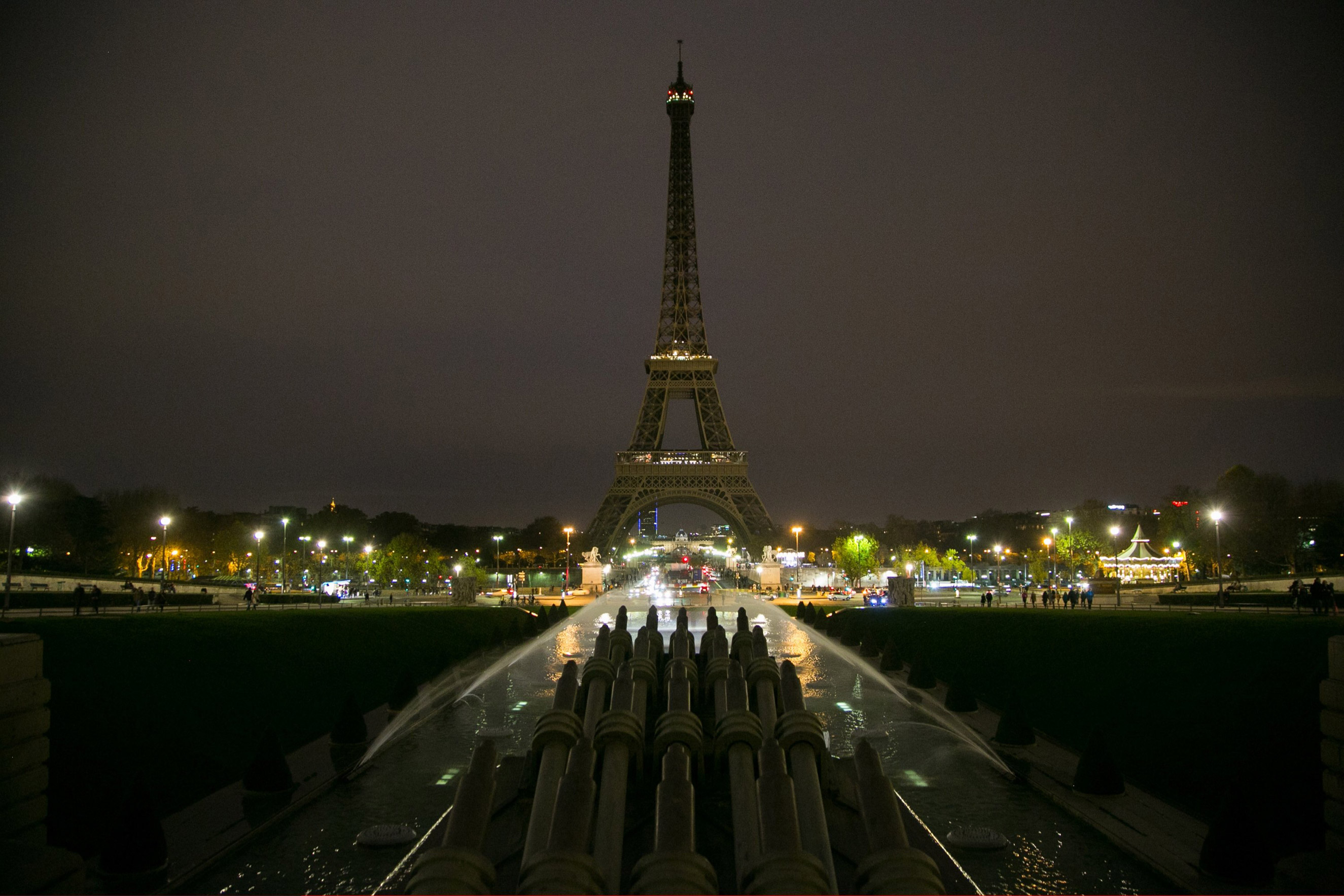 The Eiffel Tower turns off its lights in memory of the more than 120 victims the day after the terrorist attack on Nov. 14, 2015 in Paris.
Marc Piasecki—Getty Images 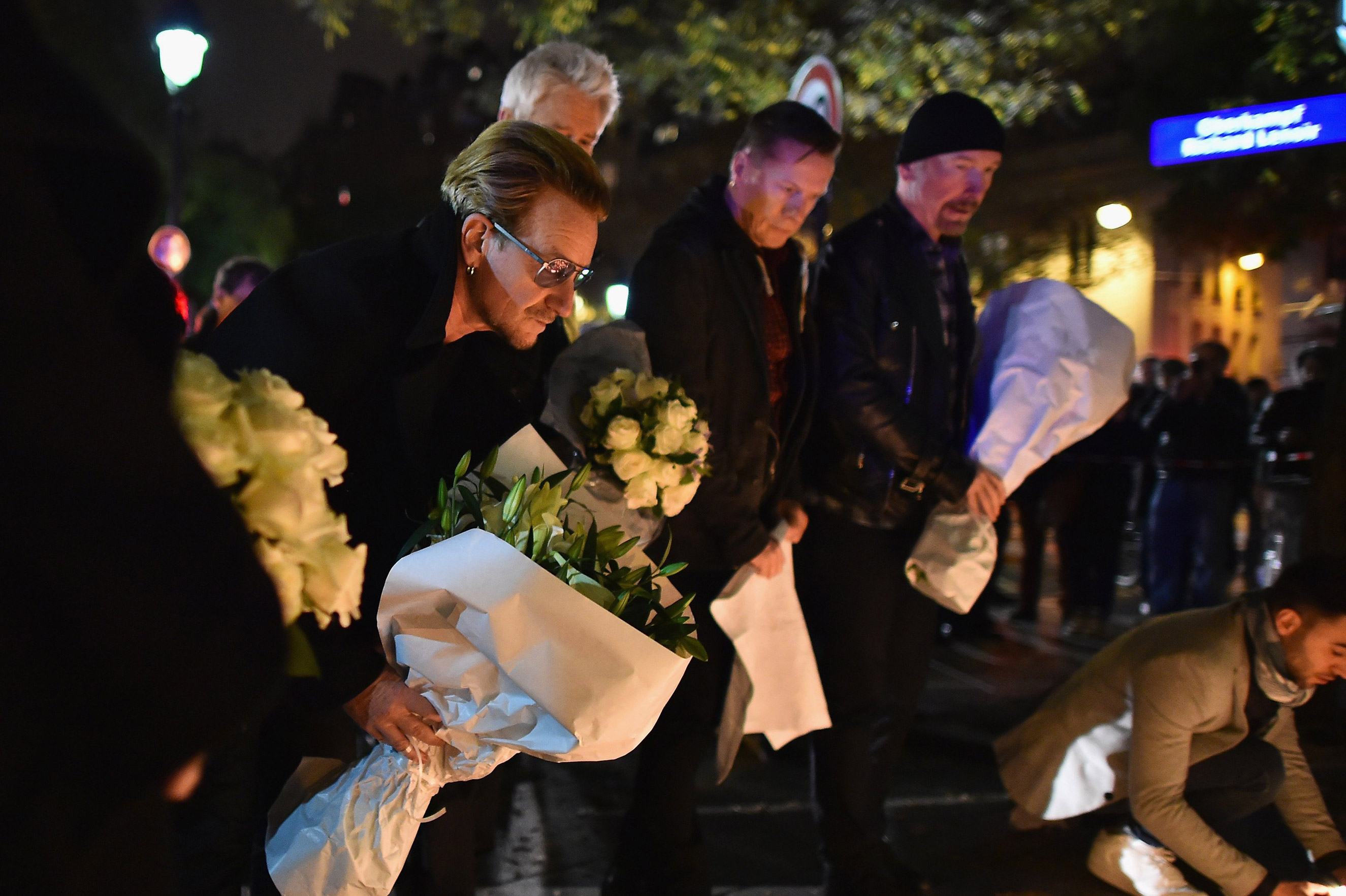 Bono and band members from the band U2 place flowers on the pavement near the scene of yesterday's Bataclan Theatre terrorist attack on Nov. 14, 2015 in Paris.
Jeff J Mitchell—Getty Images 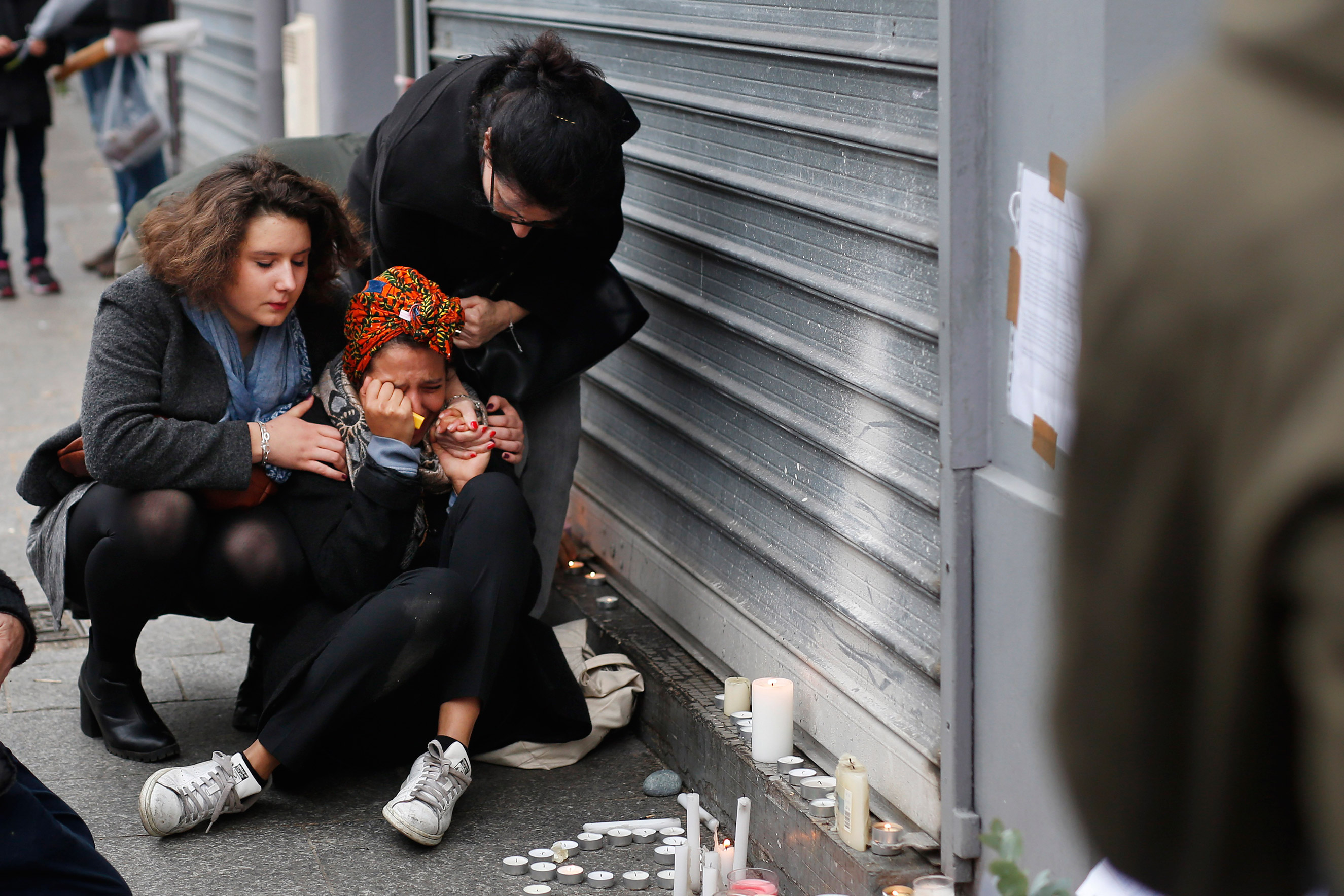 A woman is comforted by others outside the Carillon cafe and the Petit Cambodge restaurant in Paris on Nov. 14, 2015.
Jerome Delay—AP 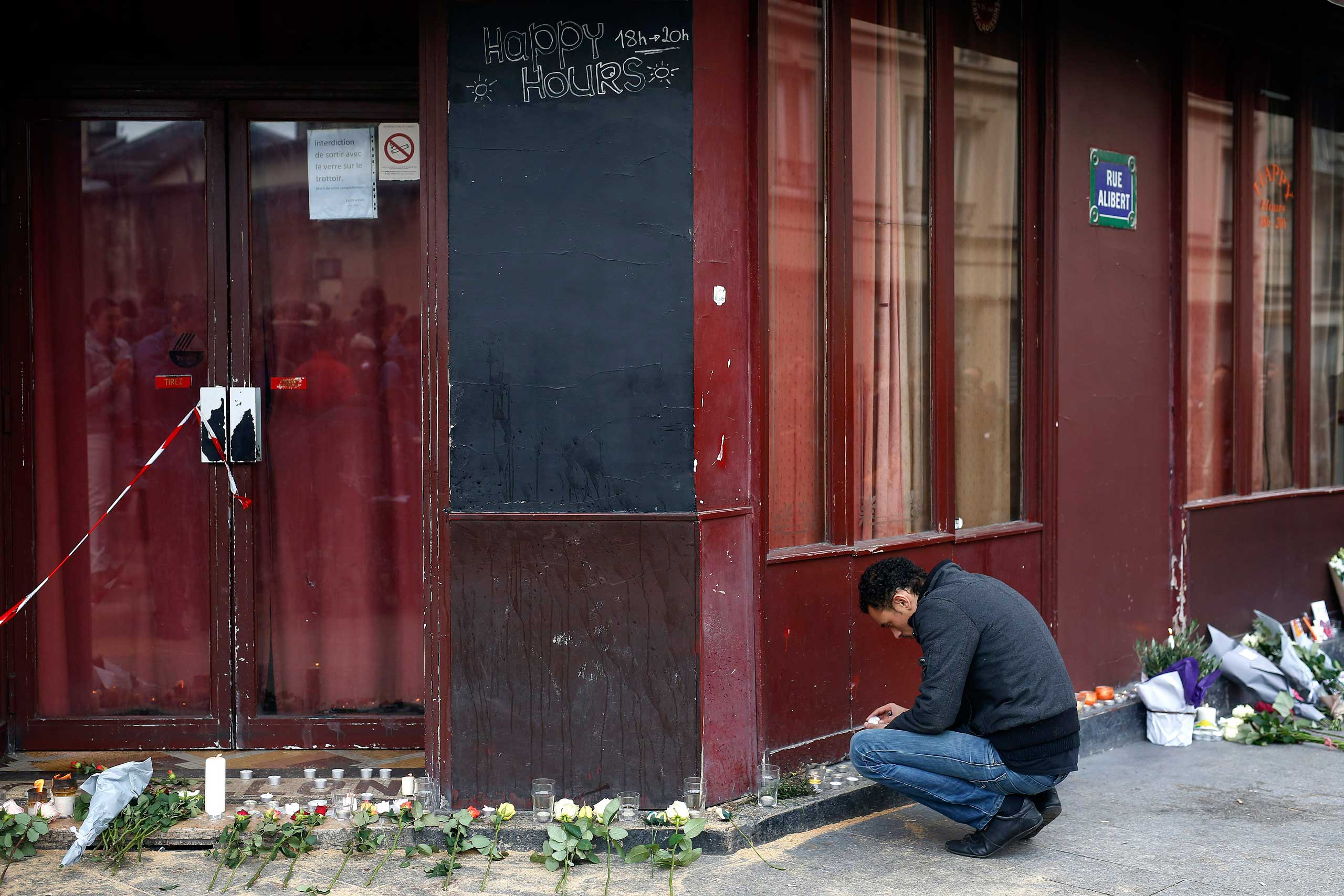 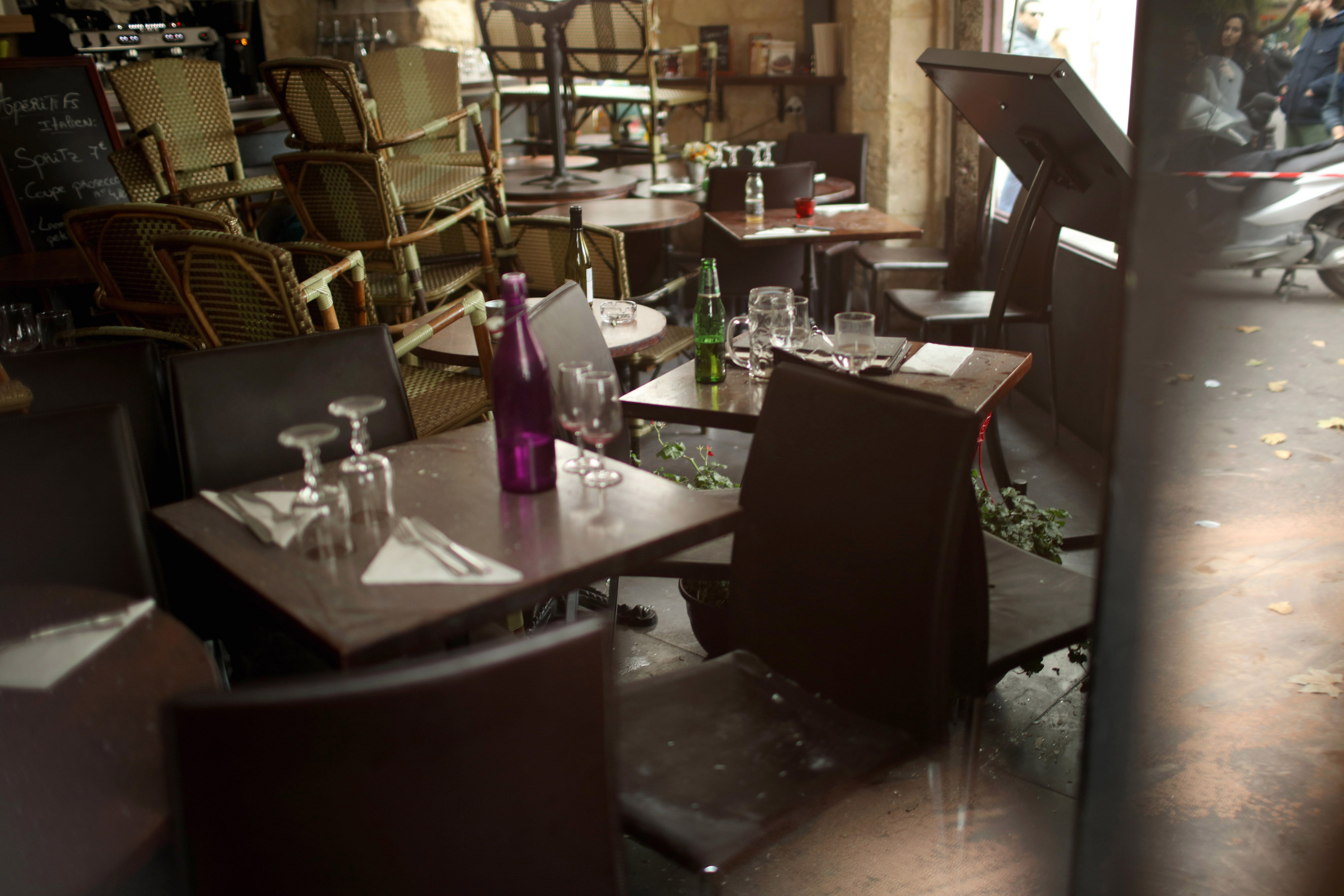 The interior of the Casa Nostra Cafe, the day after the attacks on the city, on Nov. 14, 2015 in Paris.
Christopher Furlong—Getty Images 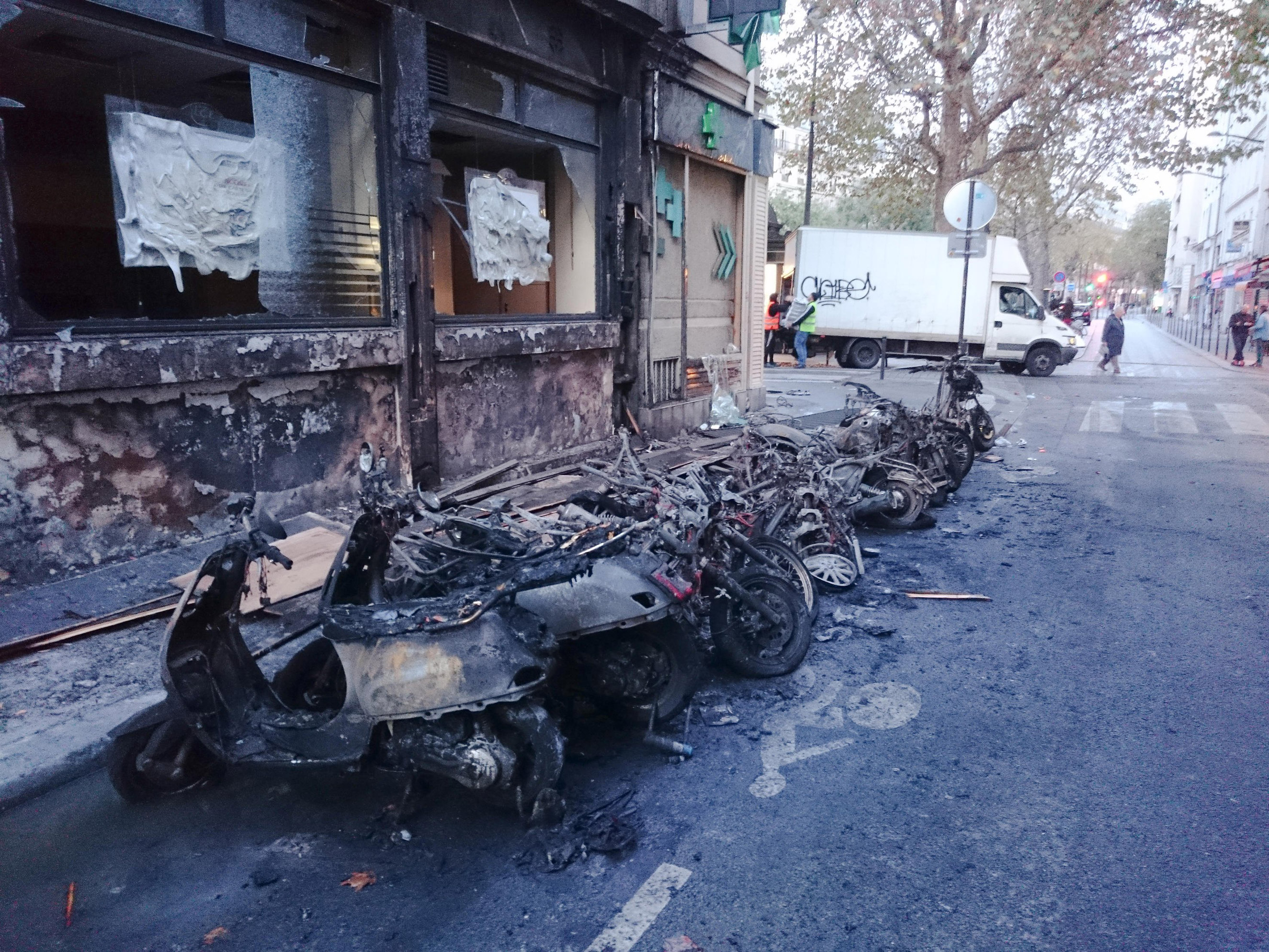 Burnt motorbikes and bicycles on the corner of Albert Thomas Lancry streets, in the 10th arrondissement of Paris, on Nov. 14, 2015, the morning after the attacks across the city.
Maxime Jouy—Newzulu/Alamy Live News 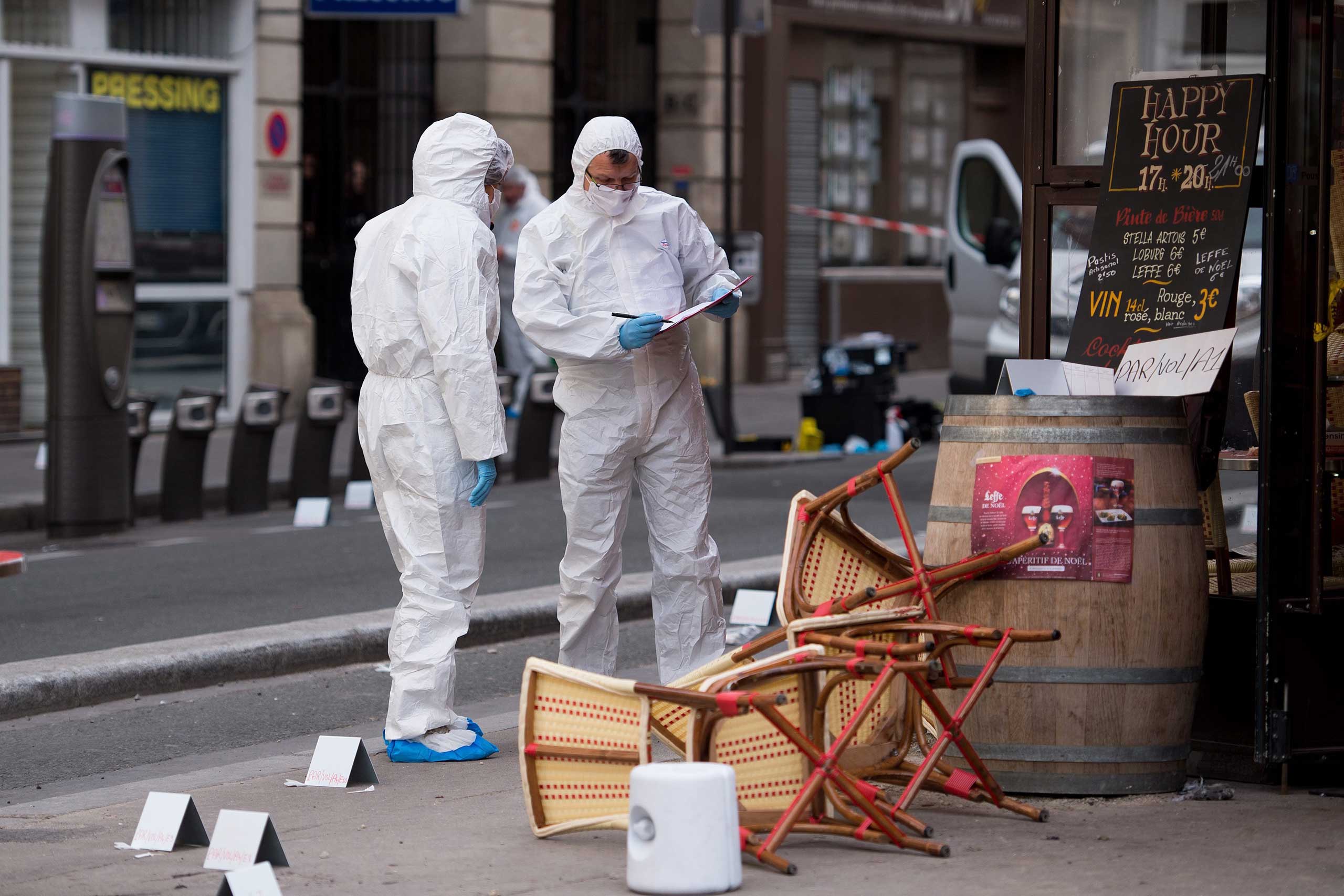 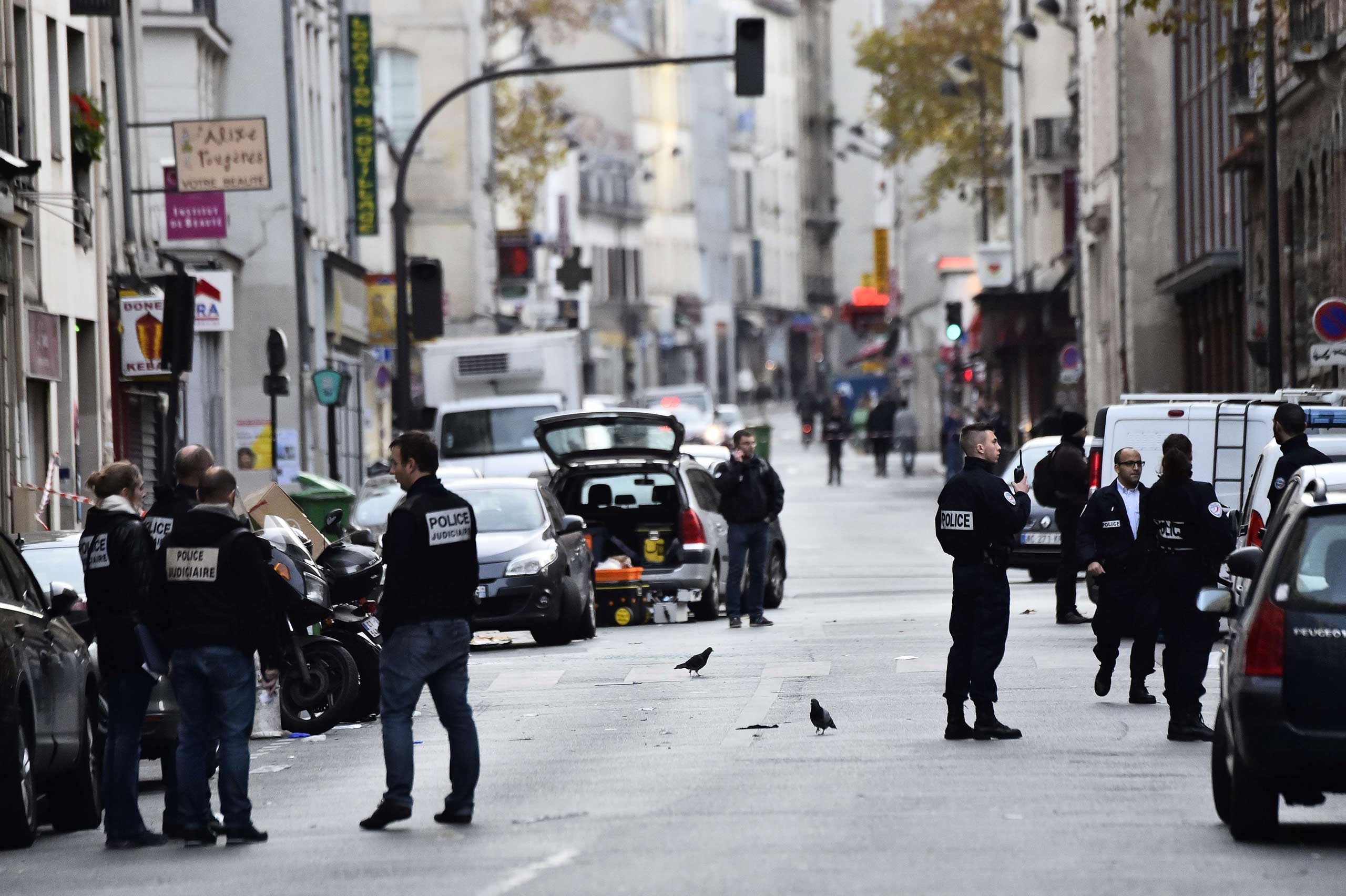 Police are seen near the Cafe La Belle Equipe at the Rue de Charonne in Paris, on Nov. 14, 2015.
Lic Venance—AFP/Getty Images 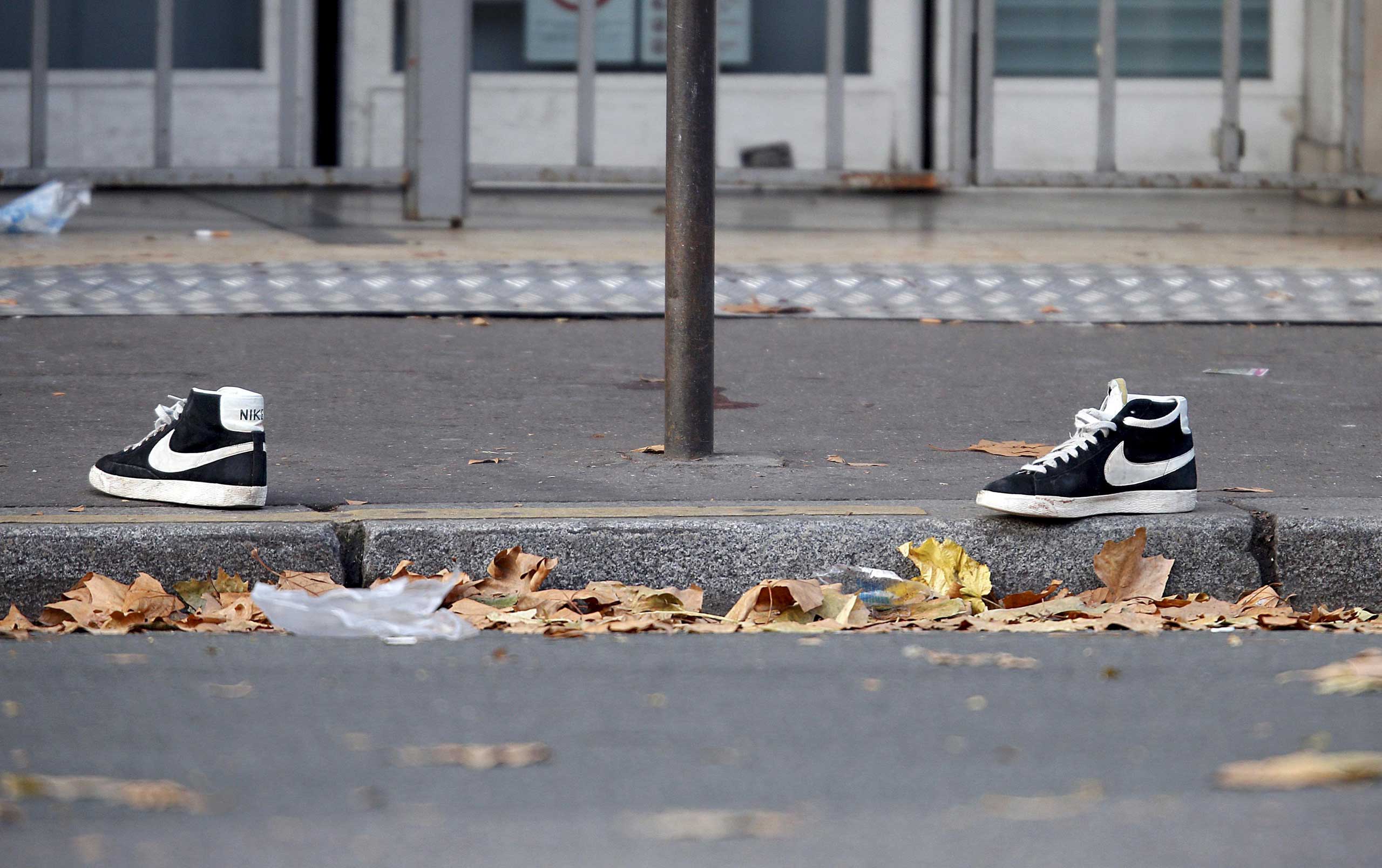 A pair of abandoned shoes seen left in the street near the Bataclan concert hall the morning after a series of deadly attacks in Paris, Nov. 14, 2015.
Charles Platiau—Reuters 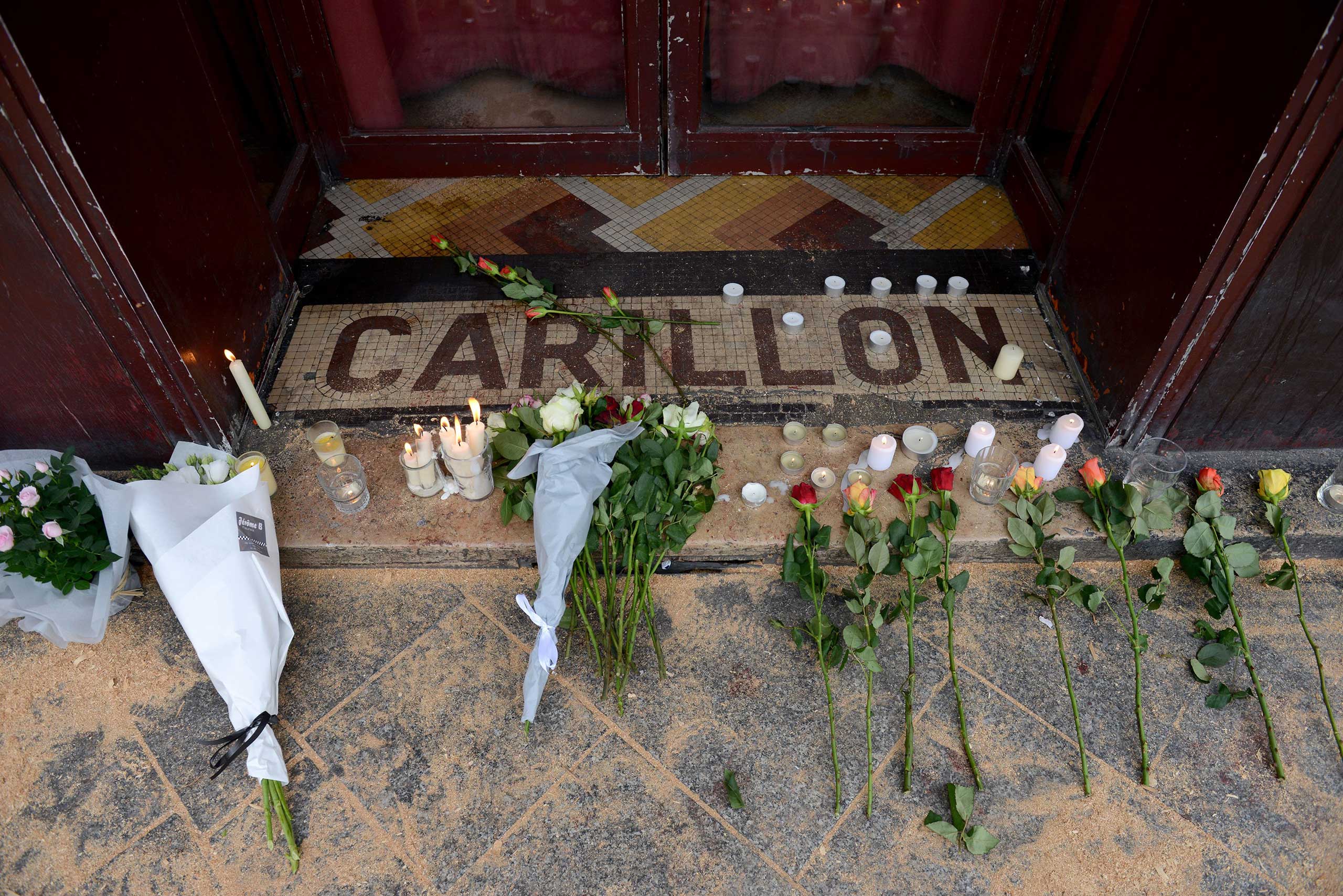 Flowers and candles are placed in tribute outside Le Carillon bar, in Paris, on Nov. 14, 2015.
Antoine Antoniol—Getty Images
1 of 10
Advertisement