ISIS Attack on Paris Suggests a Change in Strategy

The Islamic State in Iraq and Greater Syria claimed responsibility on Saturday for a series of explosions, shootings, and a mass hostage-taking in Paris that left more than 100 people dead.

If the claim is confirmed, it could be more evidence of a shift in the militant group’s tactics toward an approach that embraces more attacks that inflict massive civilian casualties outside its territorial base in Iraq and Syria.

The group said it was behind the attacks in a statement circulated online in Arabic and French. An English translation was also distributed. “This attack is the first of the storm and a warning to those who wish to learn,” the statement read.

The statement also connected the attack to French airstrikes against the group in Syria, blaming France for “striking Muslims in the Caliphate with their planes which have not helped them in any way in the ill-smelling streets of Paris.”

The statement was branded with an “Islamic State” insignia and resembled previous statements claiming responsibility for prior attacks and killings in the Middle East.

The Paris attacks, along with a separate attack in Lebanon, which killed 43 may be clearest sign to date of a new phase of operations for ISIS, a phase involving attacks outside the theater of war in Iraq and Syria.

In the past, the organization set itself apart from other jihadist groups by seizing and holding massive chunks of territory in both Syria and Iraq, capitalizing on conflict and the erosion of the state in both countries.

The chaos in Paris came a day after ISIS claimed a suicide bombing in Beirut that killed at least 43 people. In a statement assuming responsibility for the Beirut bombing, the group articulated a sectarian motive, saying it aimed to kill Shia Muslims. It also said it targeted Hizballah, the Lebanese militant group that intervened on the side of the government in the civil war in Syria.

ISIS’ branch in Egypt is also the prime suspect in the crash of a Russian passenger jet in the Sinai Peninsula. The so-called “Sinai Province” of the Islamic State claimed that it brought the jet down on October 31. Western governments say they suspect a bomb exploded on board the plane, but the exact cause of the crash remains undetermined.
Regardless, the ISIS statement claiming it brought down the jet professed a desire to inflict mass civilian casualties, an intention that the group’s Egyptian branch had not previously articulated.

Experts believe the ISIS statement claiming the attack was authentic. The statement was circulated through Twitter and on a pro-ISIS channel on the chat platform Telegram, according to SITE Intelligence Group, an organization that tracks ISIS communications. The group also released an audio recording of the Arabic statement, consistent with past communiqués.

“Eight brothers carrying explosive belts and guns targeted areas in the heart of the French capital that were specifically chosen in advance,” the statement says.

Consistent with the group’s ideology, the statement also labels France a “crusader” state and pours derision on the “profligate prostitution party” at the Bataclan concert venue, where gunmen took hostages.

The text also lists the various targets in the attack and makes reference to some of the weapons used, including explosive belts. However, the text does not mention any details regarding attack that were not already made public through the news media.

The lack of corroborating details leaves open the question of whether the attack was coordinated with ISIS central leadership in Syria and Iraq, or whether the group simply claimed responsibility for it after the fact.

ISIS leaders have called for their supporters to attack Western and other countries in the past, in particular those states that joined the U.S.-led military coalition against the group. Research suggests that these calls resulted in so-called “sympathizer” plots that are not coordinated with the group’s leadership.

There is also one apparent mistake in the ISIS’ text, which refers to attacks in Paris’10th, 11th and 18th districts. No attack is known to have taken place in the 18th district.

“What is clear is that there was a very sophisticated level of preparation of training that took place prior to the attack,” said Charlie Winter, a London-based security analyst. “I can only speculate that it would be difficult to engage in explosives in shooting and automatic weapons training in France.”

ISIS shift in approach comes at time when they are facing unprecedented pressure on battlefields in Iraq and Syria. The week before the Paris attack, ISIS faced defeat on the battlefield twice. In Syria, forces loyal to the Assad regime broke an ISIS siege of Kweiras airbase in northwestern Syria. In Iraq, Kurdish forces retook the town of Sinjar, which ISIS overran more than a year ago.

“It’s totally logical that as things get more difficult in Iraq and Syria and Libya that the group would begin to shift toward lashing out in Western countries or other countries, hitting soft targets rather than military targets, because that’s easier and it does secure a lot of headline space,” said Winter. 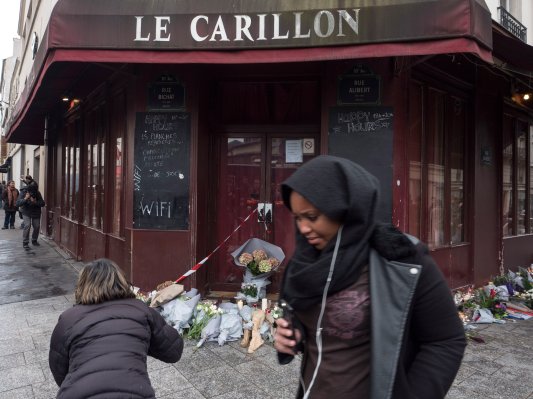 Arrests Made in Paris Attacks
Next Up: Editor's Pick