ISIS Claims Responsibility for Paris Attacks as Arrests Are Made

With Paris is deep shock and grief, the Islamic State of Iraq and Greater Syria (ISIS) claimed responsibility Saturday for the six coordinated terror attacks that rocked the French capital on Friday night, killing at least 129 people and wounding hundreds.

President François Hollande emerged from a crisis meeting of his defense council at the Elysée Palace shortly before noon, and told the nation that he regarded the attacks as “an act of war” against the country. “It is an act of war prepared and planned outside, with complicity from within the country,” he said. “It is an act of absolute barbarism. France will be ruthless in its response.”

Information slowly started to trickle out Saturday about the identities of the attackers, who authorities said worked in three teams, as the death toll ticked upwards to 129. French police said they had found a Syrian passport on the body of one of the eight attackers, all of whom died in the assault. Seven of the attackers were suicide bombers, the Associated Press reports, and police said one assailant was shot and killed. Paris prosecutor Francois Molins said one of the hostage takers at the Bataclan concert hall, where 89 were killed, was born in France, and that a French national was among three people linked to the Paris attacks arrested Saturday morning at the Belgian border. The arrests came after a car with Belgian license plates was seen close to the Bataclan theater, according to Belgium’s federal prosecutor. Police also said one attacker was a young French citizen who had previously been flagged by authorities for links to Islamist extremism.

Read More: What We Know About the Paris Attackers So Far

A Greek official said one of the attackers whose Syrian passport was found entered the European Union through the Greek island of Leros in early October, according to the AP.

“We announce that the passport holder had passed from Leros on Oct. 3. where he was identified based on EU rules,” said Citizen Protection Minister Nikos Toskas, who is in charge of police forces. “We do not know if the passport was checked by other countries through which the holder likely passed.”

“We will continue the painstaking and persistent effort to ensure the security of our country and Europe under difficult circumstances, insisting on complete identification of those arriving,” Toskas added.

As French cabinet ministers huddled in the Elysee Palace, Interior Minister Bernard Cazeneuve said on television that under the national state of emergency Hollande declared on Friday night, French police would now be able to declare curfews in specific areas or cordon them off, if they believed there were threats to security. They could also arrest “any individual who might threaten the actions of police authorities.” The French Army has deployed 1,000 additional troops to patrol Paris streets and stations, he said.

With the country reeling from the deadliest attack on the homeland since World War II—and its first ever suicide bombers—Hollande’s tough words raised the possibility that France will greatly intensify its military strikes against ISIS. They marked a sharp escalation from the mostly measured tones officials adopted over much of this year, when they have attempted to focus more on surveillance and intelligence gathering about French jihadists, than risking provoking more attacks by mounting military action. France joined the military coalition against ISIS late, launching its first strikes against the terror group in Syria only in late September, nearly nine months after the Charlie Hebdo attacks. That was despite the fact that French intelligence officials believe about 1,500 French citizens have traveled to Syria to fight with jihadist groups.

In a night of terrifying mayhem and bloodshed, two loud explosions erupted at the stadium at 9.20 p.m. on Friday, sending panic among the capacity crowd. Five minutes later gunmen opened fire at two restaurants in the eatern 10th district, which draws hundreds of people to its bars and street cafés on weekend nights. A second device exploded at the stadium five minutes after that, and within the next ten minutes there were explosions on the streets around the 10th district, and an attack at a sidewalk café. Four gunmen then stormed the Bataclan hall at 9.49 p.m. and began shooting dozens of people. Six minutes later, there was a third explosion at the stadium at 9.53 p.m. The French anti-terror forces stormed the theater shortly after midnight, killing the attackers and bringing the night of terror to an end.

The ISIS statement, written in French, made it clear that the attacks—on the national Stade de France stadium and the Bataclan hall—had been carefully crafted to strike while the city was in the throes of its typically raucous Friday evening partying. “Eight brothers carrying explosive belts and guns targeted areas in the heart of the French capital that were specifically chosen in advance,” the ISIS statement said. That included the stadium where “that imbecile François Hollande” was attending a major soccer matach against Germany and at the music concert, where “a party of perversity” was in progress.

A small crowd gathered outside the Bataclan hall on Saturday morning, some barely able to grasp the enormity of what had happened the night before, others to express their outrage. “This has nothing to do with Islam, it is the work of sick madmen,” says Fouad Razzouk, a French-born Muslim who had driven into the city from his home in the suburb. He laid a bouquet of red roses against a wall near the concert hall, where bloodstains from the dead and wounded still stain the sidewalk. He said he felt he needed to come and show his anger over the attacks. “I don’t agree with any of this,” he says.

Standing alongside him, a Muslim couple who moved to Paris from Algeria 14 years ago and live near the concert hall, said they feared that French people might increasingly regard the five million or so Muslims living in the country—many of them born in France—with suspicion. “When something like this happens, all of us are looked at aggressively,” says Raid Ghazi, 39, a communications officer for a management company. “When these people talk about God to justify this, it makes me furious.”

French newspapers on Saturday made it clear that this was no repeat of the Charlie Hebdo attacks, but something far more serious: Mass killings against random people out relaxing at the end of the work week. “This time, it is war,” said the front-page of Le Parisien, the city’s biggest selling tabloid, with the conservative daily Le Figaro showed a photo of carnage under the words, “War in all of Paris.”

There was still intense confusion in Paris on Saturday, with at least 352 injured, with 99 in critical condition, and some Parisians still hunting for missing friends or relatives. “Have you seen him?” one woman wept frantically, in front of television cameras, as she held up the photo of a relative. “He was at the Bataclan.”

See the Front Pages of French Newspapers After the Paris Attacks

Razzouk said he was dismayed at the failure of France’s anti-terrorism strategy, adopted after the January attacks. Those includes spot checks and armed patrols on the streets. All public buildings have the red triangle posted on their front doors, signalling a high state of alert. But bag checks are spotty—understandable in a freewheeling city with extensive street life and public transportation. “These patrols are nothing,” Razzouk said. “France has to attack Daesh,” he says, using the Arabic term for ISIS. “When you are hit, you have to hit back.”

Indeed, Friday’s assault was of a different order from the Charlie Hebdo attacks, with greater coordination between eight gunmen in six locations. In addition, rather than targeting specific people deemed enemies, like the anti-Islamist cartoonists or the Jewish shoppers, Friday’s attacks simply aimed to wreak havoc on an entire lifestyle, underwritten by France’s strict laws enforcing secularism in government and public life. “What we are defending is our country,” Hollande said in his statement on Saturday. “But more than that, it is our values.”

ISIS’s media organization released a video on Saturday, undated, in which an Arabic-speaking man, who threatened further attacks against France if it continued its bombing strikes against the group. “As long as you keep bombing you will not live in peace,” the man said. “You will even fear traveling to the market.” 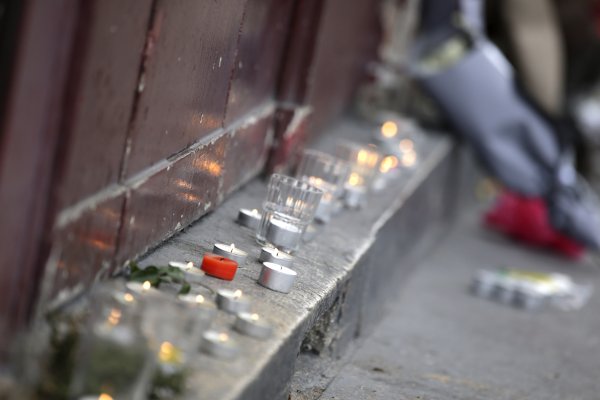 Muslims Speak Out Against Terrorist Attacks in Paris
Next Up: Editor's Pick