How World Leaders Reacted to the Paris Terror Attacks

The world stood united behind France on Friday following a series of terror attacks in Paris where gunmen killed at least 128 people, with heads of state from across the globe condemning the tragedy and pledging their assistance in bringing those behind it to justice.

Iranian President Hassan Rouhani, who was scheduled to land in France for a state visit on Sunday before going on to Italy but has now reportedly canceled the trip, sent a message to his French counterpart Francois Hollande calling the attacks “crimes against humanity,” the news agencies of both countries reported.

Hollande also received a phone call from U.S. President Barack Obama, who “reiterated the United States’ steadfast, unwavering support for the people of France, our oldest ally and friend.” He also offered any necessary support for the French investigation of the attacks, according to the White House.

Indian Prime Minister Narendra Modi — currently in the U.K. on a three-day official visit — expressed his condolences on Twitter, as did his British and Canadian counterparts David Cameron and Justin Trudeau respectively.

Condolence and support from other global leaders, including those of countries like Saudi Arabia, the United Arab Emirates and Kuwait, continued to pour in during the early hours of Saturday.

Read next: What We Know About the Paris Attacks 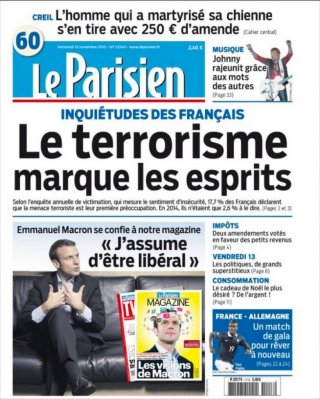 A French Daily Published a Cover Story on Terrorism Fears Just Hours Before the Paris Attacks
Next Up: Editor's Pick