Terrorism arrived at France’s doorstep for the second time this year on Friday, when a series of attacks killed at least 128 people across its capital city Paris. For the sporting world, the violence hit even closer to home, with two suicide bombers reportedly detonating themselves at the Stade de France soccer stadium where the French national team was playing against Germany (French President Francois Hollande was also in attendance).

Footage of the match posted on social media shows the exact moment the first explosion was heard, and another moving video shows spectators singing the French national anthem as they evacuated the arena.

Messages of solidarity and mourning poured in from soccer players across the globe, including former France star Thierry Henry, his Australian peer Tim Cahill and former Chelsea player Didier Drogba.

Meanwhile, the French soccer team’s next game, a friendly against England next week at London’s Wembley Stadium, is likely to be canceled because of the attacks, the Guardian reported. The soccer associations of the two countries are discussing the next course of action and are expected to announce a final decision on Saturday.

Read next: What We Know About the Paris Attacks 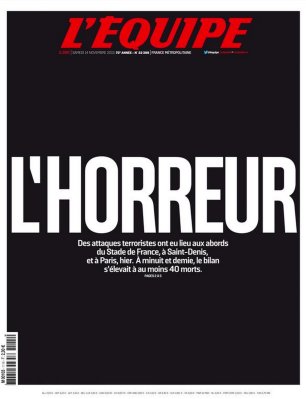 See the Front Pages of French Newspapers After Attacks
Next Up: Editor's Pick