What We Know About the Paris Attacks

By Charlotte Alter and Rishi Iyengar

Terror returned to Paris for the second time in a year Friday night when at least 127 people died in a series of brutal terrorist attacks at various locations around the city. The militant group Islamic State of Iraq and Greater Syria (ISIS) claimed responsibility for the attacks early Saturday, praising them as “miracles.” French President François Hollande also blamed ISIS, calling the attacks “an act of war” and vowing to retaliate against the group.

How did this start?

At about 9:45 p.m. local time, reports surfaced of a shooting in a popular area packed with bars and restaurants. Shortly afterwards, explosions were reported outside a stadium where French President François Hollande was watching a soccer game between France and Germany. Meanwhile, shots were reported in the Bataclan concert venue where an American band was playing, and soon it was revealed that multiple attackers had taken hostages inside.

How many attacks were there?

There appear to have been attacks at six sites around the city, but three major attacks have emerged as the most deadly:

Shots were also fired outside La Belle Equipe bar, in the 11th arrondissement. There was another shooting at La Casa Nostra pizzeria, just south of the two restaurants.

What are the casualties?

By early Saturday local time authorities put the death toll at 127, of which about 100 were killed during the hostage situation inside the Bataclan theater. About 200 others were injured in the attacks, authorities said, including 80 in serious condition.

A total of eight attackers were confirmed dead, seven of them through suicide bombings, Paris prosecutor’s office spokeswoman Agnes Thibault-Lecuivre told the Associated Press early Saturday. However, authorities are reportedly still searching for accomplices that may be at large.

How has France reacted?

Hollande blamed ISIS for what he termed an “act of war,” by the militant group. He said the attacks were “organized and planned from outside,” and declared three days of national mourning.

“It is an act of war prepared and planned outside, with complicity from within the country,” he said. “It is an act of absolute barbarism. France will be ruthless in its response.”

The French President had earlier declared a state of emergency and announced he would reinstate “systematic border checks” on all modes of transport in and out of the country. In a televised address, he urged citizens to remain calm, even as Paris went on lockdown. “France needs to be strong and the state needs to be strong,” he said. “What the terrorists want is for us to be scared. There are things to be scared about. But in the face of terror we have to be united and we will defeat these terrorists.” Later, he went to visit the Bataclan theater, where at least 100 people were killed, and thanked the first responders, while promising vengeance on whoever orchestrated the attacks. “We will lead the fight,” he said. “It will be merciless. When terrorists are capable of such atrocities, they must be certain that they will face a France united and determined.”

Paris was on lockdown early Saturday, which means that public facilities like schools, museums, libraries, gyms and markets will be closed on Saturday. Flights and trains, however, are running as scheduled and there has been no major change at any of the French border points.

Has anyone taken credit?

ISIS claimed responsibility early Saturday, saying the attack was just “the first of the storm” and condemning France as a “capital of prostitution and obscenity.”

How did the world react?

World leaders quickly expressed solidarity with France in the aftermath of the attacks. President Obama declared the day “an attack on all of humanity and the universal values that we share,” promising the U.S. would stand by France in its response. Chinese President Xi Jinping, in a phone call to Hollande, also vowed to assist in the combating of terrorism. British Prime Minister David Cameron echoed Obama, saying the U.K. would do “whatever we can to help” while German Chancellor Angela Merkel pronounced herself “deeply shocked” by the attacks. Russia said the attacks were “monstrous,” while Indian Prime Minister Narendra Modi and Canadian Prime Minister Justin Trudeau expressed their solidarity on Twitter.

Iranian President Hassan Rouhani, scheduled to be in France this weekend after visiting Italy, canceled his European trip for the time being and denounced the attacks as “crimes against humanity.”

Write to Charlotte Alter at charlotte.alter@time.com and Rishi Iyengar at rishi.iyengar@timeasia.com. 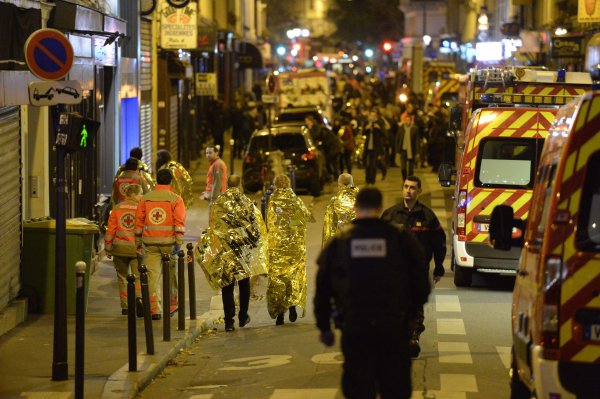 Paris Attacks Witness Describes Moment of Horror at Concert
Next Up: Editor's Pick