A judge is set to decide this week whether to make public a video showing Chicago police shooting a black teenager 16 times, footage that those who have seen it say could create the kind of unrest seen in other U.S. cities following police-related deaths.

On Nov. 19, a Cook County judge will rule on a Freedom of Information Act request seeking the release of dashcam footage showing the final moments of 17-year-old Laquan McDonald, who was chased by cops before being shot repeatedly by Jason Van Dyke, a white police officer.

Two attorneys for McDonald’s family who have seen the video believe it could spark violence in Chicago if released to the public. A recent Chicago Tribune op-ed about the video was titled “The video that might rip Chicago apart—and why you need to see it.”

“What’s on that video is so much more graphic than what we saw from Baltimore or South Charleston,”Jeffrey Neslund, an attorney for the McDonald family, told TIME, referring to the police-related deaths of Freddie Gray and Walter Scott. Neslund obtained the video through a probate subpoena.

The incident occurred on Oct. 20, 2014, after police received information that an individual was carrying a knife on Chicago’s southwest side. Several squad cars approached McDonald, one of which included a dashcam. Neslund and Mike Robbins, another attorney representing the McDonald family, says one of those vehicles followed McDonald while shining a spotlight on him for several blocks.

According to both attorneys, police chased McDonald into Pulaski Road, a four-lane thoroughfare, and stopped in the middle of the street as they attempted to contain him. Officer Van Dyke then emerged from the passenger side of one vehicle and fired an initial round of shots at McDonald from a distance of roughly 12 to 15 feet, then fired again multiple times after McDonald collapsed to the ground. The attorneys say that while McDonald refused to drop the knife, he was walking away from officers at the time he was shot.

“You can see he’s walking away from the police at an angle when the officer starts to shoot,” Neslund says. “There was no threat.”

According to the Chicago Tribune, Fraternal Order of Police Spokesperson Pat Camden told reporters that McDonald had PCP in his system and described him as “staring blankly” at officers and had a “crazed” look. Camden said McDonald refused officers’ orders to drop the knife and lunged at police before they opened fire. He also said McDonald slashed one of the police vehicle’s tires and damaged a windshield.

Robbins says that while McDonald was not acting rationally, he wasn’t aggressive and did not threaten officers. An autopsy later showed that nine of the 16 gunshots were fired into the back of McDonald’s body.

“You see him spin and go down, and they continued to shoot at him,” Robbins says.

According to multiple news reports, Chicago police also allegedly deleted 86 minutes of security camera footage from a nearby Burger King that would’ve likely showed part of the police chase.

The Chicago Police Department declined to comment for this story, citing an ongoing investigation headed up by the FBI. Van Dyke is reportedly on desk duty but still receiving pay.

The McDonald family does not want the video made public, having won a $5 million settlement in April which included an agreement not to release the video. The Nov. 19 ruling stems from a FOIA request from Chicago-based freelance journalist Brandon Smith asking for the police department to release the video.

The city claims that making the video public would impede ongoing investigations of the incident. However, Matt Topic, an attorney representing Smith, says there are currently no affidavits from the FBI. The Chicago Police Department would need detailed affidavits to prove those exemption claims, Topic says.

On Friday, Mayor Rahm Emanuel said he believed that it wasn’t appropriate to release the video. “You have, obviously, an investigation,” Emanuel said, according to the Chicago Tribune. “And you never would release a video while that investigation is going on.”

There will likely be an appeal on Thursday no matter what the judge decides. But the attorneys say the video will likely eventually be released, either through the current FOIA request or once the investigation is complete.

“There will be an uproar” if it’s released, Neslund says. “And it could be destructive.” 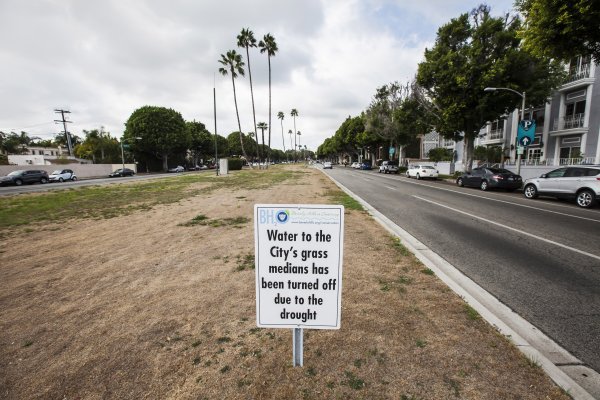 California May Extend Water Restrictions
Next Up: Editor's Pick