For nearly ninety years, TIME has selected the most influential person of the year. From Adolf Hitler and Mahatma Gandhi to The American Soldier and The Protester, the title is given those who have—for good or ill—most influenced the news and our world in the past year.

2015 is filled with newsmakers who have defined our year. Leaders like Angela Merkel and Vladimir Putin have commanded the spotlight on a global stage, while American politicians like Hillary Clinton and Donald Trump have held the country’s attention as we head into the next presidential election. Entertainers like Taylor Swift and Drake have captivated us with their talents, while Pope Francis and Caitlyn Jenner have shaped the culture.

The choice is made by TIME’s editors, but we’re always interested to hear who our readers think should take the title. Head over to TIME’s face-off and yes/no polls to cast your vote. This year, audience response company Pinnion is recording, visualizing and analyzing the poll results. Votes from both polls are pooled together to create the totals displayed on the site.

TIME’s Person of the Year will be revealed on NBC’s Today Show on Dec. 9. The news will be shared simultaneously on TIME’s Twitter feed and Facebook page. 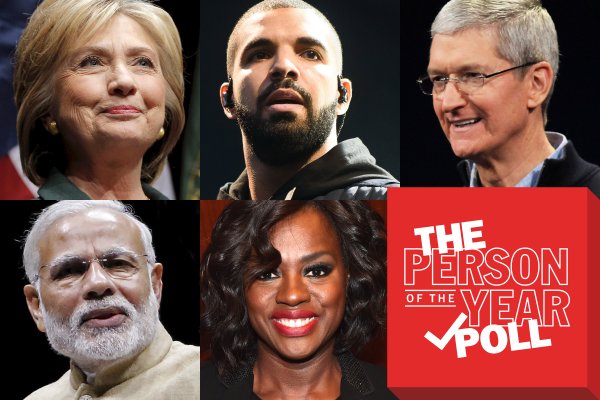 TIME Person of the Year Reader’s Poll — Updating Results
Next Up: Editor's Pick