A Utah judge who ordered a child to be removed from a lesbian couple may have violated the state’s ethical code of conduct, according to a top gay rights lawyer.

Juvenile Judge Scott Johansen ordered on Tuesday that the adopted child of Beckie Peirce and April Hoagland, who were licensed as foster parents, be removed from their custody because children should be raised in opposite-sex homes. It’s the first serious challenge on same-sex adoption rights since a Supreme Court ruling legalized gay marriage this summer.

Currey Cook, an attorney with Lambda Legal, an LGBTQ rights group, says this is the first time a judge has ordered a child to be removed from a home since Obergefell v. Hodges legalized same-sex marriage across the country. Cook says that the judge’s ruling goes against the state’s code of conduct for judges, which says that they must perform duties without bias or prejudice.

“It is extremely troubling to think that a baby who has already been through the trauma of removal from their biological parent may experience additional trauma of yet another move from qualified, loving foster parents based on inaccurate information fueled by bias and prejudice,” Cook says. “The good news in Utah is that the child advocate, the welfare agency, the biological parents, everybody involved in the case was very supportive of this couple.”

Cook also also believes the ruling is based on discredited research. When asked what research he was citing, Judge Johansen refused to answer, according to the Salt Lake City Tribune. While the ruling has not been made public, the most cited study by opponents of same-sex couples raising children was conducted by University of Texas sociologist Mark Regnerus, who published research in 2012 finding that children who grew up in same-sex households were more likely to have been sexually abused or attempt suicide as adults.

But that study, which went against a body of research showing no difference for adults who grew up in same-sex households, has largely been refuted. The American Sociological Association has also found that there’s no evidence that “children with parents in stable same-sex or opposite-sex relationships differ in terms of well-being.”

The Obergefell ruling in theory should have also broken down any remaining barriers for gay or lesbian couples to adopt children. Just a decade ago, adoption by gay and lesbian couples was illegal in at least a half-dozen states. But today, only one state—Mississippi—has an outright ban on same-sex adoption, and that law is currently being challenged in court.

Peirce and Hoagland told the Salt Lake City Tribune that they plan to appeal the decision. 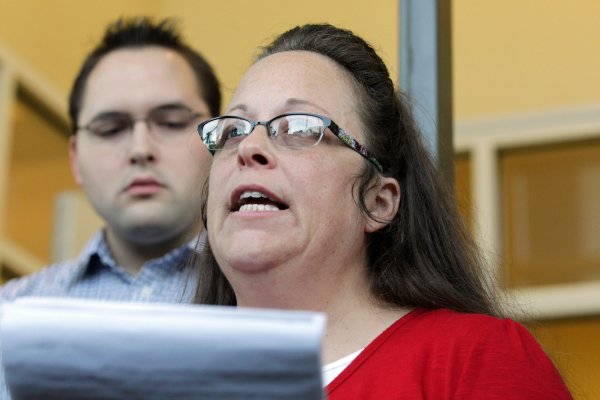 Kentucky to Remove Clerks' Names From Marriage Licenses
Next Up: Editor's Pick