A Grieving Congregation Struggles with the Spotlight

On a hot Sunday in early August, the pews at Mother Emanuel were so crowded that some longtime parishioners couldn’t get to their regular seats. Visitors from near and far have been streaming into the historic sanctuary since the shooting, and many of them come with donations in hand. At this service, the big gift was $50,000 for Emanuel’s music ministry from the band Hootie & the Blowfish.

This outpouring would seem welcome news for a congregation in need of solace. But for many ­Emanuelites—especially those most directly touched by the ­massacre—the influx of attention and money and a change in leadership are creating their own complications.

The sites of tragedies have a way of becoming destinations for pilgrims, and Emanuel is no different. “Mother Emanuel has become important to the world,” says the Rev. Mark Tyler, pastor of Bethel AME in Philadelphia, Emanuel’s sister church. When tour groups and out-of-towners arrive, they are often met by the Rev. Norvel Goff, who is filling in for the slain Rev. Clementa Pinckney. An elder who oversees 30 churches, Goff has made a point of welcoming outsiders as part of what he calls the church’s “healing process.” He says his mission is to not let the world forget what happened. To that end Emanuel is dotted with signs printed 6/17/15. The focus has been embraced by some families, but others bristle that Goff has been more attuned to the spotlight than to the needs of his grieving parishioners.

Then there is the matter of money. Millions of dollars have flooded into Emanuel since the shooting (the church has not said how much, but Goff put the figure at over $2 million in late July). While some of it has come from large corporate donations, plenty of cash-stuffed envelopes have arrived too. And some families are concerned about where all of it is going. In October, Cynthia Hurd’s husband Arthur sued Emanuel for not being transparent about the donations. (The church agreed to provide Hurd’s attorney with accounting documents.) Goff has denied any wrongdoing and accused critics of perpetuating “lies and innuendos.” The suit is the second allegation of financial impropriety at a church run by Goff in as many months. In November, members of his former church in Columbia, S.C., sued for access to financial records after the church was saddled in debt while Goff was pastor (he reportedly called the suit’s claims “disheartening and inaccurate”).

Soon the donations will slow, the spotlight will dim and Emanuel will be left to figure out how to move forward on its own. It wasn’t so long ago that Pinckney consolidated the church’s two Sunday services because of low attendance. The challenge for this grieving congregation is turning a moment into a lasting foundation. 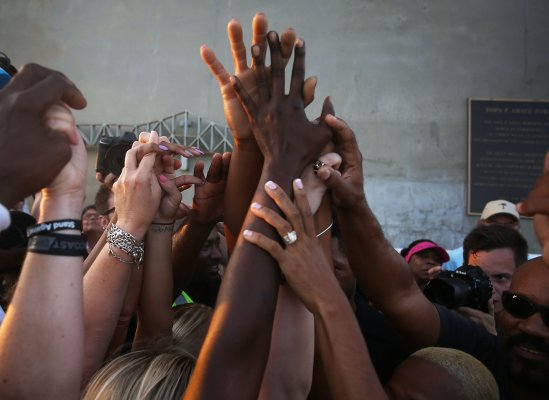 Searching for Signs of a Change in Charleston
Next Up: Editor's Pick