Airbnb Hosts Never Have to Set Their Own Prices Again

On Thursday, a new set of tools for Airbnb hosts will go live, amid the happy fanfare of 5,000-odd home-sharers gathering at the the company’s annual host conference in Paris. Among them is a feature called “smart pricing,” which VP of product Joe Zadeh says will answer, for good, a question that they get all the time: What price is the right price?

The new features are being presented as a means of making hosting more attractive and easier than ever. Some of the tools are meant to foster a sense of community among home-sharers — like a host mentoring program, through which more experienced hosts can earn credit for helping newbies, and a “toolkit” that includes instructive videos made by hosts, for hosts. The company also launched a new certification program that will allow hosts to earn a “Business Travel Ready” label for their listing in the hopes of getting more bookings from Airbnb’s corporate partners.

It’s the updated smart pricing feature, though, that could make the most difference for the site’s users. Hosts can now opt in to letting Airbnb analyze scores of factors and set a price, updated each day, that is meant to be the optimal compromise between price-conscious guests and hosts that want to make as much revenue as possible.

“Airbnb sits on a lot of very rich market data: who is searching for what, for what date, what’s a hot date, what attributes are important for a certain price range,” Zadeh says. “Someone might set their rate at $200 all year round, and that’s a fantastic deal in July but it’s a horrible deal in November.”

In May, Airbnb launched pricing “tips” that hosts could take or leave. In a June blog post, the company stated that when a host did opt to manually set their price within 5% of Airbnb’s suggested point, their likelihood of getting booked increased nearly four times over.

But factors that might alter that sweet spot can change, often quickly. Maybe a nearby ski lodge unexpectedly closes for the season, maybe there’s a hurricane warning, or perhaps the Pope announces that he’s coming to town. Hosts had the tedious option of going back to their dashboard each day to see if their price was still in line with Airbnb’s analysis, or just leaving their prices as is and hoping for the best.

As of Thursday, hosts can simply set a minimum and maximum range, as well as how often they’d to host, and let Airbnb do the rest of the guessing and calculating, based on things like the quality and quantiity of a listing’s reviews, other sales in the market (especially when the Pope is coming to town) and the weather.

While some people do under-price listings, more often than not hosts are over-pricing—and could actually make more money by lowering their rates, says Zadeh. This is especially true of the host who is willing and able to home-share more than a couple weeks per year, because that lower price point will lead to more consistent bookings that quickly outweigh the higher price of fewer bookings that the host would otherwise get.

“It’s really about maximizing the revenue,” Zadeh says. “We think about our hosts as partners … and we want to make it incredibly easy to be successful.”

While these updates will likely be an improvement for user experience, maximizing that revenue has political potential, too — the power of which the company is keenly aware of, coming on the heels of a ballot-measure fight the company spent $8 million on in its hometown of San Francisco.

In San Francisco, it was the ardent local users going door-to-door that helped tilt the November vote—that would have more heavily regulated and limited home-sharing—in the company’s favor. The most outspoken supporters argued that it was in fact the money they got from home-sharing that helped them pay their mortgage or their rent in a city where costs of living are skyrocketing and lower-income residents are getting pushed out.

On Wednesday, Airbnb launched a policy manifesto outlining how they plan to work with regulators and users, in ways that could help prevent future such controversies if the company can follow through on its stated goals.

In the “Community Compact,” Airbnb expressed a commitment to having their guests pay taxes to localities like visitors do when they stay at hotels, as well as a willingness to share data about their users in certain circumstances. The company provides the San Francisco tax collector with data, for instance, to prove that guests are paying taxes and hosts are remitting them.

The company also said they are committed to making sure their hosts are only renting out permanent homes. Perhaps the most controversial, though isolated, practice that has come to light in San Francisco is that some landlords have hoarded rental stock amid a housing crisis to rent it out full-time on such websites.

“We are proud of almost all of the activity that happens on our platform every day,” Airbnb CEO Brian Chesky wrote in a blog post about the compact. “But it’s become clear that we need to clarify what we will and will not tolerate in our community.” 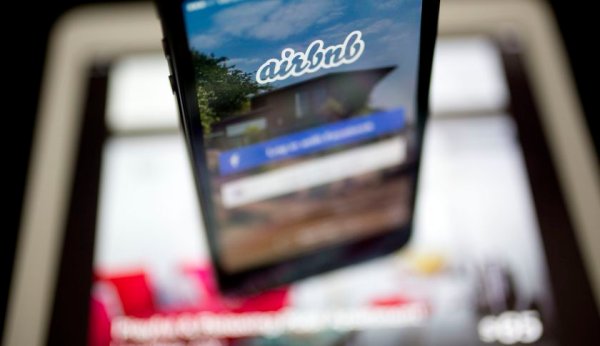 Airbnb Just Apologized for These Passive Aggressive Ads
Next Up: Editor's Pick