The encounter took place in a non-descript room at the Vatican, and conversation stuck to regular diplomatic briefs. But for the parties involved on Tuesday morning, the meeting held historic significance: Randy Berry, the first-ever U.S. Special Envoy for the Human Rights of LGBTI persons, and Vatican officials from the Holy See’s Secretary of State office were meeting for the first time.

The moment, simple as it was, marked a new level of U.S. engagement with the Catholic Church on LGBT human rights issues. Berry told TIME he met with officials for about an hour, and he met separately with representatives from the Pontifical Council for Justice and Peace. For both sides, the conversations were new.

President Barack Obama only created Berry’s position at the State Department in April, and until now, Berry has primarily only talked with faith leaders in the field, as he has traveled to 30 countries in the last seven months. He met with evangelical congregations in Jamaica when he visited in May, for example. Conversations about LGBT human rights have never before reached this level with the Catholic Church, which considers gay and lesbian sexual behavior a sin and restricts marriage to unions of one man and one woman.

Berry’s focus however is not on marriage, but on the twin foreign policy issues of violence and discrimination. That strategy, Berry hopes, allows for common ground with the Vatican to stand together against extreme violence. “We were not there to talk about issues of civil unions or same sex marriage, for example, because that is not part of our policy,” Berry says. “That is not part of the conversation we were interested in engaging in, nor do I think were they.”

Berry requested the Vatican meeting as part of his three-week trip to Eastern Europe, which has included visits to five countries and a stop in Athens for the annual conference for ILGA, an international lesbian, gay, bisexual, trans and intersex rights association. Church officials accepted. “I wanted a chance to brief Vatican officials myself,” Berry says. “These issues of violence and extreme discrimination are of concern to us all.”

The meeting is particularly noteworthy ahead of Pope Francis’ visit to Uganda at the end of the month, where homosexuality is illegal. When Uganda introduced a law last year that further criminalized homosexuality with extensive prison sentences, Western powers including the U.S. pushed back, while local Catholic leaders had mixed responses. Courts eventually struck the measure down, but hundreds of gay Ugandans have since fled to Kenya, where homosexuality is also illegal and where Pope Francis also plans a visit during his trip to central Africa.

Berry says he spent time in “listening mode” to learn from officials about how Pope Francis engages on human rights issues when he travels. He remembers how a gay rights activist was included when a large group of political activists met with Pope Francis in Paraguay this summer. “That inclusive approach speaks volumes,” Berry says. “I would hope that certainly those same messages are shared, and I fully expect that they will be because I think they are completely consistent with what we’ve seen from His Holiness in the past.”

The fact that the meeting even happened is revealing. It is a sign that the Obama administration sees future opportunity to work with the Vatican after the Pope’s September visit, with the possibility to build on the partnership they have strengthened on climate change and migration. It is also a sign that Vatican diplomatic efforts are willing to take certain amount of risk by talking with the U.S. on this issue, as any LGBT issues thrusts the Church into an often conflicted spotlight. Pope Francis has continued to advocate dialogue and listening to a range of perspectives even as he has ramped up the Vatican’s diplomatic activism, and the U.S. State Department continues to take note and look for opportunities to engage.

Discussion of any concrete collaboration with the Vatican would be premature, however. For now, Berry hopes to further common ground and expand contacts for future conversations. “It was an important first dialogue and I hope that we will continue,” Berry says. “I get to do a lot of really amazing things in this job,” he continues. “It was quite a positive experience.” 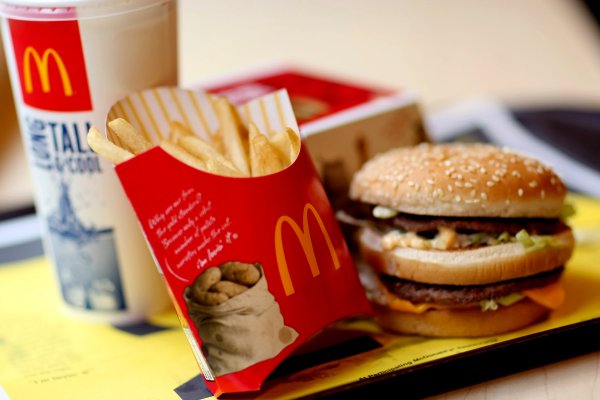 McDonald's Fires Employee Who Threw Water on Homeless Man in Viral Video
Next Up: Editor's Pick