At a televised Democratic candidate forum Friday, MSNBC host Rachel Maddow showed Bernie Sanders a black-and-white photo of a man with his face turned away from the camera speaking before a civil rights protest. “This is you in 1962,” Maddow said to the Vermont senator.

“Who is that handsome young guy with the dark hair?” joked Sanders. The audience laughed.

There was just one problem: Four University of Chicago alumni who went to school with Sanders tell TIME they believe that the dramatic photo of Sanders, which his campaign has featured on its website and in a promotional video, is not in fact a photograph of Sanders. An archivist at the University of Chicago agreed in January that Sanders was not the speaker in the photo, though the school’s official decision on the man’s identity is still pending. (Since this story was published, the photographer unearthed new evidence that the man in question is Sanders.)

The alumni say the man in the photo is actually Bruce Rappaport, a fellow student activist with a similar haircut, glasses and stature, who died in 2006. “I can certainly recognize it as Bruce Rappaport, partly because of the curvature of his spine, and I see that tall thin look from the side,” said Richard Schmitt, who was in the class of 1966 and lived near Rappaport in a campus dorm. “When I saw it, I said, ‘That’s Bruce Rappaport.”

Bruce Stark, who was roommates with Rappaport for two years and best man at his first wedding, said he was sure he recognized his friend in the photo. (Stark can be seen seated in the far right of the photo. He is the African-American man with the hair part.) “The way he’s holding the book there and his left hand—that was a Bruce gesture, and the hair,” said Stark, who was well-aquatinted with Sanders and now supports his presidential bid. “My reaction is yes, that looks like Bruce.”

Two other alumni, Sally Cook, class of 1966, and Robin Kaufman, class of 1965, also said they believed the photo showed Rappaport. Since the image does not show the man’s face, the alumni conceded that it was difficult to say for certain the man is not Sanders.

There is no question that Sanders, who has so far largely failed to attract black supporters of his candidacy, was deeply involved in civil rights activism at the University of Chicago, including the sit-in depicted in the photo, a protest of the university’s segregated housing practices. Sanders gave speeches in the freezing Chicago winter and was arrested by the police. He also demonstrated for desegregated schools in the city of Chicago, and participated in Dr. Martin Luther King’s march on Washington in 1963.

On Thursday, a Sanders spokesman said the candidate was sure he was the person in the photo. “I showed Bernie the picture again. That’s him. He remembers Bruce Rappaport,” wrote spokesman Michael Briggs in an email. Hours later, a Sanders senior adviser said the campaign would investigate further. “This is the first we’ve heard of it. As we sit here right now I still think that’s Bernie. But we’ll take a look at it,” said strategist Tad Devine. “There’s no doubt as to his participation in all of this. We’ll just confirm the visual.”

Another photo in the University of Chicago archives shows Sanders standing next to the school’s president, George Beadle, at around the same time. Sanders is wearing similar clothing to the man in the other sit-in photo, but appears to have a different hairline and profile.

“Special Collections is aware of the uncertainty regarding this photograph and is reviewing the caption information,” Jeremy Manier, associate vice president for communications at the University of Chicago, said on Wednesday. “That process is ongoing.”

Contemporaneous photos of Rappaport show that he looked remarkably like Sanders, his co-leader in the civil rights movement on campus. They were both tall, dark-haired, glasses-wearing activists.

“It is funny. The similarity is in the tall, slender bent-over look with the ratty sweater,” said Kaufman, who says she was a good acquaintance of Sanders and a friend of Rappaport. She said she has spent time with both of the men since graduation.

At the University of Chicago, Sanders was a leader of the Congress on Racial Equality, a civil rights group. In his first year at school, Sanders and fellow activists suspected that the university housing was discriminating against black students, so he tested the theory by having black and white couples to try and rent the same room. They found that black couples were being turned away. In January 1962, Sanders led the sit-in at the school’s administrative building and sought to negotiate a settlement with the university. It was one of the first civil rights sit-ins outside the South.

“Intellectually, that was a very formative period for me,” Sanders said in an interview with TIME earlier this year. “I went to Chicago with a strong sense of justice, I think. The fact that people should not be discriminated against. The fact that it’s not right that some people have so much and so many people have so little.”

With the rise of the Black Lives Matter movement, Sanders has been discussing his past at the University of Chicago more. His acquaintances from the time say that even as a student, he was a consistent advocate for rights for African Americans. Still, he has been unable to make any inroads with African Americans, who overwhelmingly favor Hillary Clinton. The image is featured in a biographical video on the campaign’s website, though it is not in any television advertisements.

“I’m thrilled with what Bernie’s standing for, and what he stood for back then,” said Rappaport’s former roommate, Stark, who is black. “It really hurts me he’s not getting a lot of play among black people.”

The photograph captures something of Sanders’ early life, his fellow alumni say—even if it’s not actually Sanders.

Kaufman said what’s important is that Sanders was there in 1962 and doing what he does best: agitating. “Bernie was leader in that, and he’s continued to make a life that way,” Kaufman said. “It’s a great picture that captures the moment.”

Update: On Feb. 11, 2016, Danny Lyon, the photographer who took the pictures of the sit-in posted photographs of Sanders at the same event. The rediscovered photos show Sanders seated and facing the camera, wearing a rough, dark sweater and a white shirt, similar to the activist in the disputed photo. Lyon said all the photos are in the same series, leading him to conclude that Sanders is the man in question.

“Because of the outtakes, the pictures taken before the next picture, I deduced that it was him,” Lyon said. “Did these guys switch sweaters or something? It’s Bernie.” Lyon does not remember taking the photo. To see the other photos, click here. 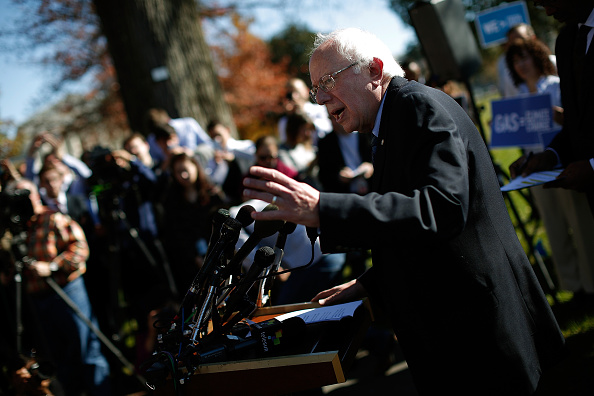 Sanders Fires at Clinton Over Email Controversy
Next Up: Editor's Pick