The 2016 presidential campaign is well under way, and the candidates are already jousting over who is best suited to respond to an increasing number of obstacles abroad, ranging from the refugees crisis in Europe and the Middle East, to the threat of ISIS, to Russian aggression under President Vladimir Putin. As Democrats and Republicans, the four of us will almost certainly support different candidates in November 2016. But we all agree on this: Our security and prosperity are at risk if America retreats from our leadership responsibilities around the world.

There could not be a riskier time for America to pull back. Whether it is helping counter crises like the Ebola outbreak or narco-trafficking in Latin America, engaging abroad is the smart thing to do. And we need look no further than the peril that Syrian refugee families face across the Middle East to understand that U.S. leadership is also the right thing to do. We must ensure that America leads in partnering with other nations, the private sector, and non-governmental organizations to address global challenges that can be solved by no one alone.

Our next president must be ready on day one for the daunting challenges before us.

To confront today’s global threats, America’s military must remain unmatched, but it cannot be the only tool in our national security toolbox. Our national security depends on diplomacy and development as the critical first efforts to advance our interests and build a safer world. Civilian programs strengthen democratic governance and fight poverty in some of the most difficult parts of the world, mitigating conditions that extremist groups seek to exploit. By promoting rule of law and supporting a robust civil society, diplomacy and development can prevent crises from requiring military intervention at great risk to our servicemen and women.

This is why so many prominent military leaders, including more than 160 retired three- and four-star generals and admirals, are such strong advocates for the full funding of the international affairs budget. Retired four-star General James Mattis said it best to Congress: “If you don’t fund the State Department fully, then I need to buy more ammunition.”

We must continue to lead in the global economy in order to stay competitive. American diplomats help U.S. companies compete in the global marketplace, while development programs strengthen the rule of law and fight corruption. The results are clear. Over the past 40 years, trade has tripled as a share of our national economy, and more than half of all U.S. exports now go to the developing world. Eleven of our top 15 trading partners were once recipients of U.S. assistance. Going forward, small and big businesses alike know that 95% of America’s potential customers live outside the U.S.

We should never forget the tens of millions of lives saved from diseases like polio, HIV/AIDS, and malaria because of U.S. assistance. America continues to lead the world in humanitarian relief, providing a hand up to those most in need. American compassion, persuasion and inspiration were critical in the defining national security struggle of the second half of the 20th century—the Cold War. These same values are even more indispensable to the challenges we face in the 21st century.

While presidential candidates debate America’s role in the world, we want to be clear: Disproportionate cuts to diplomacy and development funding such as those we have seen in recent years risk weakening our influence in the world. At roughly 1% of total federal spending, these strategic investments produce outsized benefits for the American people and for our world.

The four of us have joined together to engage and inform the foreign policy debate in the lead-up to the November elections next year. There will and should be a vigorous debate on many issues over the course of the campaign. We believe that candidates from both parties must demonstrate their commitment to strengthening America’s role in the world with all the available tools. Nothing less than our country’s security, prosperity and leadership are at stake. 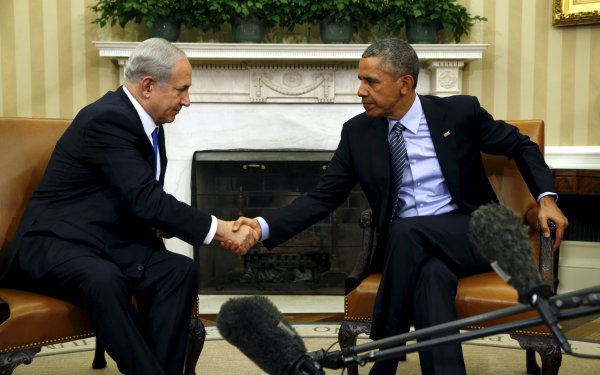 Why Netanyahu Can't Afford to Be Optimistic
Next Up: Editor's Pick