Boycotts are bustin’ out all over. First, we had the police unions calling for a boycott of Quentin Tarantino’s December release of The Hateful Eight. Then, a little more than a week later, we had more than 30 football players from the University of Missouri boycott playing until the school’s president was fired or quit. Finally, the day after the success of the football boycott, presidential candidate Donald Trump, outraged because of the absence of Christmas symbols on Starbuck’s holiday cups, sorta called for a boycott of the coffee chain: “Maybe we should boycott Starbucks. I don’t know. Seriously. I don’t care.” But the tale of the two actual boycotts illustrates how a powerful political tool can be used effectively to bring about positive change in one case and be counter-productive and self-destructive in the other.

I believe in boycotts to fight social injustices because it’s an inexpensive grassroots way for average people to join together to affect change. When Indiana passed its Religious Freedom Restoration Act, a clear violation of the Constitution, boycotts against Indiana-based companies that took place in Oakland, Calif., San Francisco, Denver, Seattle, Washington, D.C., Portland, Ore., Connecticut and elsewhere, and by Disciples of Christ, Salesforce, Yelp, Angie’s List, Wilco and Charles Barkley, among others, forced the legislature to reconsider. The key to a righteous boycott is that the cause is about a greater social issue and not just an inconvenience, that it reflects the values in the Constitution and not just the private values of certain groups, and that the object of the boycott cannot be meaningfully persuaded in any other way. Usually, a boycott is a last resort.

These standards were certainly met by the University of Missouri football team. African American students had been complaining about racism on campus for years with few results. The hunger strike of student Jonathan Butler galvanized the football team into action. Explained football player Ian Simon: “It’s not about us, we just wanted to use our platform to take a stance for a fellow concerned student on an issue, especially being as though a fellow black man’s life was on the line.” By the end of the boycott, which lasted only two days, faculty members had shown support by canceling classes. Without the boycott, which could have cost the university $1 million that week alone by missing the weekend game with Brigham Young University, the voices of the protesting students would probably still have gone unheard. Sadly, money talks louder than reason or moral principles.

Unfortunately, the police reaction to filmmaker Quentin Tarantino did not meet any of the standards for a righteous boycott. At an Oct. 24 rally in New York against police brutality, Tarantino shouted to the crowd: “When I see murder I cannot stand by. … I have to call a murder a murder, and I have to call the murderers the murderers.” The backlash was nearly instantaneous: Law enforcement unions across the country called for a boycott of Tarantino’s movie. In an ominous addendum, the Fraternal Order of Police, the nation’s largest union for sworn officers, threatened Tarantino with an unnamed “surprise” they have in store for him in the future.

It’s hard to believe that these police organizations don’t realize that this doomed-to-fail boycott and insidious attempt at silencing a critic through personal intimidation will make them look worse than if they’d ignored him. Not only will people still see his movie, but the police will look like bullies, further validating Tarantino’s point. That’s counter-productive to improving police-community relations. Like most African Americans, I support the police. According to a Reuters poll from January, 56% of blacks approve of the job being done by their local police departments. But that doesn’t mean we don’t acknowledge the problems and raise our voices to advocate change.

Clearly, the police have decided the time is right to make their stand against national criticism spearheaded by, but certainly not limited to, Black Lives Matter. The police may be emboldened by FBI Director James Comey’s complaint of a “Ferguson Effect,” which he describes as police officers reluctant to engage with suspected criminals out of fear they may be filmed and become targets of investigations. Drug Enforcement Administration head Chuck Rosenberg supported Comey’s assessment. Unfortunately, neither Comey nor Rosenberg offered any hard facts, just some anecdotal hearsay from police chiefs they’ve talked to. And we should demand that hard facts before agreeing or disagreeing with their glib and irresponsible “Ferguson Effect” contention that is meant to curb criticism by scaring us.

Celebrities who use their fame to publicly praise or criticize anything to do with social or political institutions or policies of America are usually subject to an immediate and harsh backlash because Americans are rightfully wary of those who may use their fame to sway public opinion without knowing what they’re talking about. Viola Davis’ recent acceptance speech at the Emmys called for more diversity in Hollywood. Immediately, a white soap opera actress tweeted criticism saying that Davis “has never been discriminated against.” Patricia Arquette’s Oscar acceptance speech calling for wage equality was met with criticism, especially when backstage she encouraged “women in America, men who love women and all the gay people and people of color that we’ve all fought for to fight for us now.” Critics claimed Arquette implied that the fight for equality of those groups mentioned was over, which was meant to demean her intellectual capability and therefore her political savvy. However, it was clear from the context that she was calling for all oppressed people to fight together for equality for everyone.

When Stephen Colbert recently supported the movement against police brutality and racial bias in the judicial system by stating on his show that “black people aren’t imagining this stuff,” Fox News’ Eric Bolling responded with a convoluted pretense of logic: “The numbers bear out that at the rate at which African Americans commit crime, it’s commensurate with the amount of times that they end up dead at the hand of a cop.” Critical thinking teachers across the country must have rejoiced at having this perfect example of at least two logical fallacies in one sentence. And no law enforcement agencies called for the boycott of Colbert’s show.

When celebrities make public pronouncements, it is reasonable for the public to be extra diligent in analyzing the logic and facts of what they say because they wield a lot of influence merely by being celebrities. That’s why advertisers pay the celebrities millions to wear their watches, drink their colas and drive their cars. But when the product they’re advocating is an ideal, we need to scrutinize what they say much more carefully.

Tarantino is a filmmaker, but his words must be judged on merit, not on the fact that he’s a celebrity. Patrick Lynch, the president of the Patrolman’s Benevolent Association, stated that Tarantino was a “purveyor of degeneracy” and that “it’s no surprise that someone who makes a living glorifying crime and violence is a cop-hater, too.” Are Francis Ford Coppola (The Godfather) and Martin Scorsese (Goodfellas) also cop-haters because their films glorify crime? It’s true that the appeal of a Tarantino film is the unrelenting action and suspense merged with giddy melodrama that makes his work so entertaining and popular. Does Lynch mean to imply that all who watch Tarantino films are also cop-hating purveyors of degeneracy? One can’t help but wonder how many police have seen Pulp Fiction and Django Unchained.

Aside from making movies that are memorable for their flash, style and boldness, Tarantino has pioneered racial equality in his characters by making them both good and bad. He’s sidestepped bland political correctness to create more complex characters, like the manipulative house slave played by Samuel Jackson in Django Unchained. In Jackie Brown, he featured a 48-year-old black woman as the central character, shattering conventional wisdom about which race, age and gender can star in a film. Django Unchained, along with director Steve McQueen’s 12 Years a Slave, reminded the public in a visceral way just how horrific slavery was. The fact is, Tarantino’s been speaking about injustice for most of his career.

What did Tarantino say that was so outrageous? He said that some police have killed unarmed black people, either because of personal bias or institutional racism that did not train them properly. That the tendency to kill unarmed black people because they are black is a form of murder. Whether you agree or disagree, it’s a reasonable statement to make and it is protected by the Constitution. Would the police have instigated the same boycott if a black filmmaker had made the same statements? Is Tarantino a target because he’s white and the boycott is a way to discourage white support for black causes?

The mistake the police unions are making is trying to characterize themselves as the victims. When 800,000 people carrying guns try to intimidate a guy who carries a viewfinder, they come across as hostile, defensive, and aggressive, all the things they are being accused of. The added warning by Jim Pasco, executive director of the Fraternal Order of Police, that his organization has a surprise planned for Tarantino to affect his movie’s success reeks of high school theatrics, not worthy of such an esteemed organization.

The object of a boycott should not be to silence criticism, which then comes across as an end run around the First Amendment. Instead, the police should have responded with maturity and compassion by saying: “We hear you and we’re doing everything we can to rectify the situation so all people feel protected rather than targeted.” And, of course, they should mean it. That is the police that we want, the police we deserve, the police we can all support. 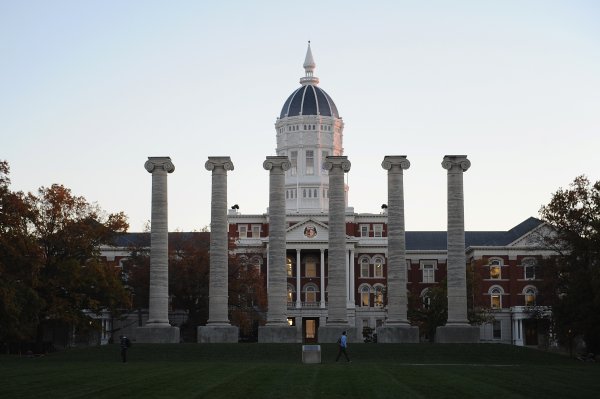 Mizzou Prof: 'I Have Been Called the N-Word Too Many Times to Count'
Next Up: Editor's Pick