Suspect Arrested Over Threats Against Black University of Missouri Students

University of Missouri police have arrested a suspect accused of making online threats against black students and faculty over social media. The threats are the latest in a series of racial incidents to affect the campus.

Authorities arrested Hunter M. Park for making a terrorist threat on the anonymous messaging app Yik Yak, according to a police statement. In one post on Tuesday, Park threatened to “shoot every black person I see,” according to the Associated Press. Another warned people to not go to campus on Wednesday, saying “some of you are alright. Don’t go to campus tomorrow,” reports CBS.

The threats were quickly shared across the internet.

Twenty-year-old Park is a student at Missouri University of Science and Technology, according to police.

“University of Missouri Police have apprehended the suspect who posted threats to campus on YikYak and other social media,” read a statement posted on the University of Missouri’s emergency alert website. “The suspect is in MUPD custody and was not located on or near the MU campus at the time of the threat.”

A protest campsite on campus was taken down overnight in light of the threats. 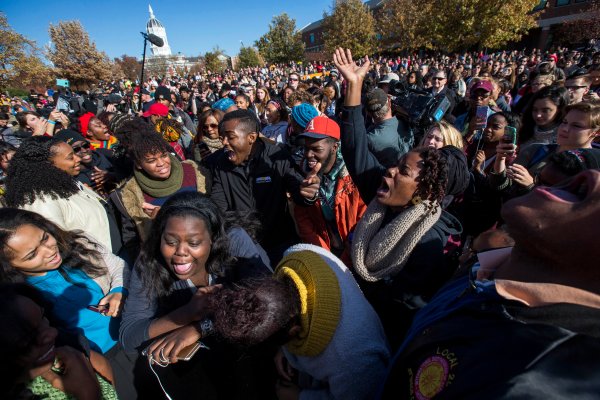 University of Missouri Professor Who Blocked Reporter Apologizes
Next Up: Editor's Pick