Why the GOP Debate Didn't End the Party's Crisis

Strap in. Any predictions the Republican primary would lose its drama soon seem to be foolhardy.

Tuesday night’s debate suggests the road to a nominee is going to be a wild and unpredictable one as the rivals appear to have finally gotten the hang of facing each other. With some gentle jabs and hard-thrown punches, the major contenders jousted with one another—and then against the presumptive Democratic nominee Hillary Clinton, who earned boos at just the mere mention of her name at the Milwaukee Theater.

But it also revealed deep divisions among Republicans—on spending, on foreign policy, on the future of the party—that guarantee the primary season will go on for a long time. It will fall to voters in Iowa, New Hampshire and beyond to suss out what kind of person they want to put forward as the standard bearer of a party that has not won a national election since 2004.

The debate was the first narrowing of the GOP field, with only eight candidates taking part in the main contest and four in the undercard. But there were few standout moments or significant missteps, essentially freezing the status quo for another month until the next debate on Dec. 15. The race remains as fluid as before, and it is unlikely voters will see any of the major candidates exit before they meet again on the Las Vegas Strip.

But one thing is clear: trouble is a’coming. The veneer of civility has fallen among the contenders, with each presenting a different vision of what Republican voters are looking for. The debate offered sharp contrasts on substance, with the White House hopefuls sparring in close quarters. And Donald Trump, the one-time front-runner whose lead is at risk, showed he no longer cares to feign respect for his competitors.

Privately, some of the donors who met on the sidelines of the debate festivities, worried that the fierce tone might hurt the eventual nominee. Trump’s performance, in particular, was a concern for Establishment-minded Republicans who desperately want to return to the White House.

Fox Business was careful, too, not to do damage to either its brand or the candidates. Last week’s CNBC debate was widely criticized, and Fox stepped gingerly. “Did you want to name any specific steps?” Maria Bartiromo asked. To Cruz, she pressed: “But you haven’t told us how you’d pay for it.” “You can’t seriously guarantee there won’t be another financial crisis, can you?” Gerard Baker of the Wall Street Journal asked. Sean Spicer, the RNC’s chief strategist, called the Fox questions “the new gold standard.”

Many of the answers centered on broad criticism of tax loopholes, the IRS and the economic implications of changing the immigration system. Yet, to a tee, most defaulted to telling voters to go to their campaign websites for specifics. It was an easy dodge.

At other points, the candidates tried to link the economy to faith. It was a nod to the influence of Evangelicals, who hold great sway in Iowa but have yet to rally behind any one candidate. It also suggested some of the candidates were more comfortable with Bible verses than talk of the tax code.

“There are more words in the IRS Code than the Bible, and not one of them is good,” Cruz said. And Carson said he would base his tax structure on the one found in the Good Book, where everyone pays the same proportion of their income. “You can’t have a strong nation without strong values,” Rubio said later in the race.

“That was a draw,” said a top aide to a mid-tier contender. And, she added, that was to be considered a victory.

Once the debate bigwig, Trump was again relegated to the sidelines in the substance-heavy debate. At times the debate seemed to slip through Trump’s fingers and he stood, stewing in silence, as rivals sparred past him. At one point early on, he lashed out at Kasich: “I don’t have to hear from him, believe me.” Trump also tried to take control of who was allowed to answer what questions—quickly earning him chiding from the hosts. “Hold up. Wait a minute,” Trump said, pointing to Bush.

“Thank you, Donald, for letting me speak at the debate,” Bush said. “What a generous man you are,” he continued, his voice dripping with sarcasm.

And to Fiorina, the lone woman in the race, Trump lashed out. “Why does she keep interrupting everybody?” he demanded. It was a moment that could prove unhelpful for Republicans who struggle to win support from female supporters.

And when Trump was railing against a proposed Pacific trade deal by continuing his bullying of China, Rand Paul piped up with the reminder that China was not a party to the pact. An uncharacteristically sheepish Trump conceded the point and retreated.

Still, the feisty exchanges do little to calm disbelief that two neophytes remain atop the polls. Every outrageous statement and story debunking their claims only reinforce supporters’ enthusiasm. After all, Carson last week held a news conference to insist—in the absence of hard evidence—that he stabbed a peer as an angry young man.

Carson won great luck during the debate. Moderators asked him just once about the controversy that has roiled his campaign in recent weeks, that he stretched details of his celebrated biography. Carson suggested that the questions about his childhood were far more intrusive than what Clinton faced over the Benghazi attack for which she testified before Congress under oath for 11 hours last month. Turning a question against Clinton is a surefire winner among Republican audiences.

Carson also avoided much scrutiny of his less-than-fleshed-out fiscal policy proposals—he has yet to settle on a tax rate for his proposed flat tax, and has come under fire for calling for the elimination of tax deductions for homeownership and charitable giving. And on foreign policy, his answers betrayed his lack of familiarity with the issues.

Yet those two newcomers aren’t going anywhere before the next debate. Combined, they count roughly half of the Republican voters as supporters. It’s going to take more than a debate here and there to force anyone out. As the maxim goes: You don’t stop running for president because you have lost, you stop running because you’re broke. And neither is seeing empty purses.

After the debate, Kasich met with reporters and suggested he was running for President while others were campaigning to feed ego and book sales. “I actually want to be President,” Kasich said. It echoed his criticism of those who pledge to govern as ideologues. “Economic theory is fine, but people need help,” Kasich said.

But Kasich also drew criticism for his attempts to interject himself into nearly every conversation, which may have crossed the line between aggressive debating and rudeness.

Bush managed to put an end to his campaign’s death watch, delivering strong answers on the fight against ISIS and the banking system and immigration, but stopping short of having a breakout moment. Bush will never be a strong debater, but he had to prove he could improve just enough to stop the slide.

He passed that bar ever so slightly as his rivals struggled to find footing. Bush also showed his continued focus on the general election, and the Republicans’ unifying enemy, Hillary Clinton.

“They’re doing high-fives in the Clinton campaign when they hear this,” Bush said of Trump’s call for a border wall—one of at least four times he invoked her name. His closing argument slighted Trump and Clinton, making a pitch toward a broader electorate.

“He was the one candidate who related his lives to real Americans,” Bush campaign manager Danny Diaz said, reflecting how Team Jeb spent this week trying to refocus the campaign. “He has total command over the issues. We’re going to grind this out.” That may be true, but don’t expect it to be pretty.

Fiorina re-inserted herself into the campaign conversation after seemingly disappearing at last month’s CNBC debate. Cruz had glib answers ready and largely avoided the fray, focused on introducing himself to voters. He did, however, take a thinly veiled shot at Rubio and Bush over their support for sugar subsidies the benefit their home state of Florida.

(In a lesser-noted moment, Cruz forgot to name the Department of Education among the five government agencies he would eliminate as president, repeating the Department of Commerce as he ticked off the list on his fingers. It wasn’t as bad as then-Texas Gov. Rick Perry, who struggled in a debate to name a third federal agency he would scrap. “Oops,” was all he could muster. Cruz fared better.)

Rubio landed yet another solid performance, although he is focused on fundraising and building a political machine for the early states. Rubio largely skirted the substance on a range of issues from immigration to banking policy, but was drawn into a skirmish with Paul over defense spending. The exchange proved to be a winner for Rubio, whose hawkish views are more in line with the mainstream GOP.

From the undercard debate stage, Christie landed a stellar performance. Aides hope his focus on Clinton will be enough to restore him to the main event.

Even those struggling showed no discouragement. “Do you think any of the four people on that stage is any less qualified than the President?” Santorum asked after his undercard debate. Even so, he again failed to win that match-up.

Read Next: Chris Christie Proves His Mettle in Undercard 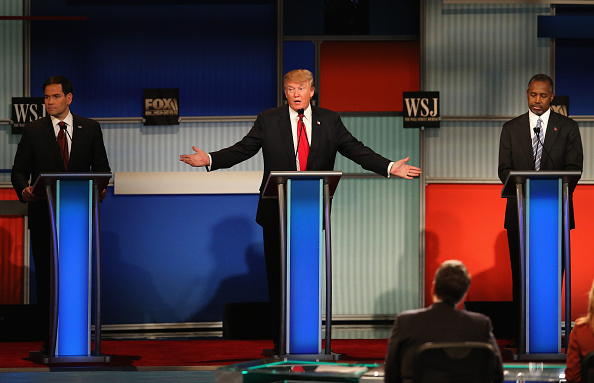 What You Missed While Not Watching the GOP Debate
Next Up: Editor's Pick