Growth Is Still All About Supply Side for Republicans

The good news about the Republican debate: a lot more substantive economic discussion than in previous rounds. The bad news: conservatives still haven’t crafted any new and better answers to the riddle of how to deal with the 2% economy, flat wages and the shrinking middle class.

There were the usual factual errors – like Carson’s claim that “every time we raise wages, jobs go away,” (most economists and even many Right Wing politicos are increasingly in agreement that potential job destruction from a moderate increase in minimum wages is negligible; see a good New York Times summary of that here). Or Rubio’s assertion that “if you raise minimum wages you’ll make people more expensive than machines” (newsflash – they already are, which is why you have tech-related job destruction at all levels of the economic food chain in all countries; robots are actually taking much cheaper factory jobs in China). Or Rand Paul’s comment that “countries run by Democrats do worse” on in terms of inequality, which misses two key points: first, only one country in the world is run by a “Democrat,” and second, state run economies like Brazil actually tend to have the lowest rates of inequality.

But there was little real grappling with the fact that every recovery since the early 1990s has been weaker, and taken longer, regardless of which party was in charge. That’s really the key problem for Republicans – there have been serious changes in the nature of the global economy since the Reagan era, and the old formula of “cut taxes, cut red tape, get growth” just doesn’t hold up anymore. Indeed, there’s little evidence that is has held any water for a couple of decades now – Bill Clinton raised taxes in 1993 and got plenty of growth; George W. Bush cut them in 2001 and 2003 and got anemic growth, and Obama didn’t do any better creating substantial growth via post-financial-crisis tax cuts.

Yet tax cuts were the main answer that all candidates proposed to bolster growth, and create new jobs, particularly in areas like manufacturing, which has traditionally created the most middle class jobs in the country. But the recent decline in manufacturing is about a stronger dollar relative to other global currencies, and that’s down to the Fed – as it raises rates, probably by the end of the year, the dollar will likely strengthen further. Which has nothing to do with tax rates, or red tape.

Of course, nobody in the Republican field likes the Fed or what it’s done with monetary policy – but likewise, nobody is willing to admit that the reason that the Fed had to take the unprecedented actions that it did in the wake of 2008 was because political polarization in Congress made it impossible to do anything more with fiscal policy (and no Ted Cruz, we can’t go back to the gold standard – among other reasons, there isn’t enough gold out there to underpin it).

The one regulatory issue that might actually have something to do with growth was the issue of “crony capitalism,” tackled repeatedly by both Cruz and Carly Fiorina. This came up in relation to both the way in which corporate lobbying power puts small business at a disadvantage (via loopholes in the tax and regulatory systems that favor large corporations over SMEs) and also the way in which the bailout of the Too Big To Fail banks, and the re-regulation of the financial system was handled.

On these issues, there’s an interesting overlap between the far left and the far right, and both have a point that large companies with rich lobbies have distorted the way capitalism operates in the U.S. – funneling money away from Main Street, and putting the small and mid-sized businesses that create most of the new jobs in the US at a disadvantage while creating risk in the financial system.

Sadly, aside from Jeb Bush’s call for higher capital requirements for banks (something that’s rather minor given that it’s already on the slate), there were few solid proposals about how to fix what is a very big and entrenched problem (the obvious silver bullet, campaign finance reform, is of course politically toxic). This is an area that’s begging for more creative economic thinking from both sides of the aisle.

Read Next: How Fox Business Played It Safe at the Republican Debate 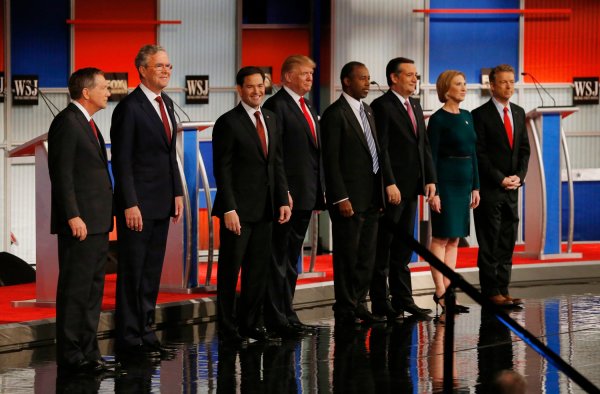 How Fox Business Played It Safe at the Republican Debate
Next Up: Editor's Pick