How Fox Business Played It Safe at the Republican Debate

In the run-up to Tuesday night’s Republican debate on the Fox Business Network, the Republican candidates had threatened, en masse, to enforce new conditions, which, if not agreed to by news organizations, would lead to their absence. The coalition of candidates fell apart quickly. But, at least in the short term, the Republicans had little to worry about.

The televised debate had strictly-enough-enforced time limits, sure; many candidates blew through the first bell, but the second was generally heeded, and the mere presence of a bell felt like a step forward. “It sounds like a game show, but it’s not,” said co-moderator Neil Cavuto at the debate’s start.

A more apt comparison might be a reality show: Two candidates more left the main stage tonight, with Chris Christie and Mike Huckabee moving to the early-evening undercard debate. But the debate provided little else for the candidates to complain about, and, counter to reality-TV wisdom, the candidates and moderators seemed to be there to make friends. The much-decried “lightning rounds,” which had previously allowed for both glimmers of personality and gotcha moments (that’s how few candidates can name an American woman to put on the $10 bill?) were gone.

And the follow-ups tended towards just restating the question initially posed, rather than anything pushy. When Ted Cruz said he’d eliminate five government departments and then named the Department of Commerce twice, the moderators avoided making an awkward moment of it.

Some of that has to do with the debate subject: It’s hard to create Grand Guignol out of the economy. But more seems to have to do with the network’s approach. Fox Business, a nascent network, has far more to lose than Fox News or CNBC, and seemed to play the whole thing safe. Weird moments with technology, a hallmark of debates in the past two election cycles, were limited to a couple of questions from social-media and showing Jeb Bush a “word cloud” of global threats.

And the debate served to reaffirm conventional wisdom: Perceived surging candidate Marco Rubio was tossed a softball that seemed to presume he was already the nominee: Why should he be elected over Hillary Clinton, who’s so much more experienced? (Neither Donald Trump nor Ben Carson, currently the two candidates leading national polls, was faced with the question.)

To be sure, the reduced-friction environment created some of the most substantial statements of policy so far, if only because the candidates spent less time arguing with the moderators—and with one another. There were a few notable skirmishes, including Cruz arguing with John Kasich over the idea of bank bailouts, but candidates got more time than ever to speak their ideas to camera. Granted closing statements rather than a concluding lightning round, several candidates listed off their website URLS; after Marco Rubio parroted Ted Cruz in doing so, co-moderator Maria Bartiromo laughed into her mic and said “That’s funny!”

After three debates in which the plotline was, in whole or in part, the candidates versus the moderators, a debate bereft of such drama felt, to borrow a phrase, low-energy. Eight candidates may still be too many for the casual viewer to suss out. After various percentages were parsed onstage, Trump jumped in in a rare breach of the evening’s generally impeccable decorum to say, “Each one of those tax plans is better than the mess we have now.” No one disagreed with him there. 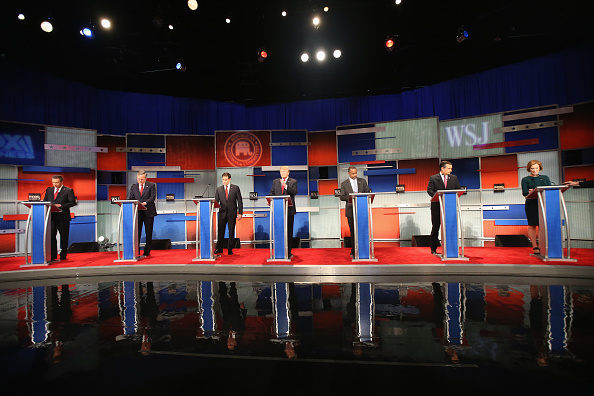 Vote Now: Who Won the Fourth Republican Presidential Debate?
Next Up: Editor's Pick