This Gender-Neutral Word Could Replace 'Mr.' and 'Ms.'

On Tuesday, Dictionary.com added a new batch of words ranging from the eyebrow-licious on fleek to the Apple-propelled digital wallet. Like every group of additions to the dictionary, the entries reflect what English speakers are interested in right now, what they’re talking about, who they are. And one of these flags being planted in 2015—the honorific Mx.—is a reflection of the culture’s current interest in rethinking gender.

If you don’t feel like labeling yourself a Mr. or a Ms. and would rather leave your gender unknown or undeclared, Mx. (pronounced like mix) is a gender-neutral option. According to Dictionary.com lexicographer Jane Solomon, this honorific has one of those rare, very-clear etymologies: Dating back to at least the late 1970s, the M was taken from the first letters of those gendered honorifics, and the x was attached to suggest an unknown quantity or thing, like it might in algebra class.

This year saw outlets like the honorific-happy New York Times publishing stories that respected sources’ preference for this binary-defying prefix. In a June article about Barnard College deciding to accept transgender women, the writer introduces a student named Caleb LoSchiavo:

One might use the honorific because they identify as bigender (having two genders), agender (having no gender), gender fluid (experiencing gender in different ways at different times) or perhaps just because they don’t feel like their gender is a defining part of who they are, which needs to be staked out for all to see right in front of their name. Mx. could also be used when referring to a transgender person whose preferred pronouns (he or she, him or her) aren’t clear.

“The need for a gender-neutral prefix seems to be very, very top of mind for people,” Solomon says. “We’re starting to see a real cultural shift in which people are talking more openly about gender. You have ongoing conversation about gender in the public eye.”

Of course part of that is the historic visibility and popularity of transgender people and plot lines, from Caitlyn Jenner to Transparent. But 2015 has also been a year when people have advocated for making fewer assumptions about any person based on gender. When Target decided to stop labeling their toys and bedding as “girls” or “boys,” that was about not boxing anybody in—cisgender or otherwise.

Using singular they or themself to refer to a generic person or a person of unknown gender (as previously in this story) is also gaining more steam—despite any objections of fusty and bespectacled English professors—says sociolinguist Ben Zimmer, executive editor of Vocabulary.com.

The lack of a gender-neutral pronoun in English “has caused a lot of headache over the years,” Zimmer says. People have tried to launch new ones, like xe and thon and zhe, but those failed to gain much ground. “There seem to be new trends in this direction, accepting they as a singular pronoun, with a recognition that there are not other good alternatives,” he adds. (He also wrote a Wall Street Journal column on the history of this phenomenon earlier this year).

So what is driving individuals and the media to be more open-minded about venturing into gender-neutral space? “Part of it is the question of whether you just default to masculine pronouns. Are you simply perpetuating a gender hierarchy? And what are the alternatives that reflect a more egalitarian society, a society in which genders are considered equal?” says Zimmer. “And more recently, it’s questions of identity, a sense that people seem to want the freedom to choose their own pronouns as a badge of identity.” 2015, it seems, is a year for mixing it up. 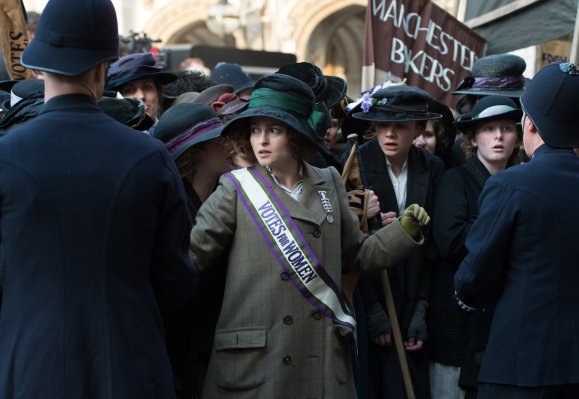 Everything You Need to Know About the Word 'Suffragette'
Next Up: Editor's Pick