Harry Potter fans are finally learning details about the American world of wizardry that will be the setting for J.K. Rowling’s Harry Potter prequel Fantastic Beasts and Where to Find Them. The latest issue of Entertainment Weekly has the scoop on the film, the story of Newt Scamander, a “magizoologist” and the author of a textbook about magical creatures that is referenced only one time in the entire Potter series. Though the film is being shot in Leavesden Studios in England, where the entire Potter series was filmed, we now know that the building that supposedly houses the Magical Congress of the United States of America is a real New York City landmark.

In fact, the new cover of EW features Eddie Redmayne as Scamander, in 1926, standing in a set dressed as the lobby of that building: New York’s Woolworth Building. The Magical Congress—MACUSA, the North American answer to the Ministry of Magic—is “hidden from Muggle view” inside the skyscraper. “Wizards enter through an ultra-fast-spinning revolving door into a grand lobby,” according to EW.

The real Woolworth building was completed in 1913 by Cass Gilbert, who was named President of the National Academy of Design in 1926. The 792-ft.-tall building was the tallest in the world when it was built. (It lost the title in 1930.) The building, known as the “Cathedral of Commerce,” was named for the F.W. Woolworth Co., led by Frank Winfield Woolworth, who owned Woolworth stores around the U.S., Canada and England. His company’s offices were housed on the 24th floor. His own office cost $35,000 and was a replica of Napoleon’s library.

The Woolworth earned attention for its Tudor Gothic portal, opening to a lobby reminiscent of a Romanesque cathedral that featured gilded tracery, mural-filled arches and a marble staircase that led to the Irving National Exchange Bank. The New York Times has called it “the most sumptuous office lobby in New York.” It also features other Gothic touches, like gargoyles, including one of Gilbert and one of Woolworth himself.

Critics initially objected the building’s Gothic décor, but Gilbert stood up for his choices. “New schools of design come, with intervals of centuries between, by slow evolution, and can no more be created out of whole cloth that new social orders or systems of government,” his obituary quoted him as saying. “The problem of this great shaft cried aloud for some form of Gothic treatment and the soaring sense of uplift achieved more than justifies it.” Gilbert had also designed the George Washington Bridge and the U.S. Supreme Court building in Manhattan.

In the twenties, the building utilized the newest technology of the day, with high-speed elevators, self-sustaining electrical power generation and an extensive architecture system to brace for the winds. (Potter fans may prefer to imagine that magic did the trick.)

Today, if you’re looking for the fictional spinning doors that will let you in to the MACUSA, you’ll have to sign up for a tour. 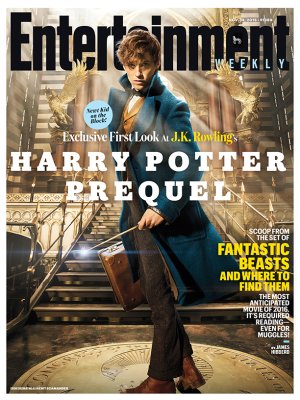 Here's Your First Look at Eddie Redmayne in the <i>Harry Potter</i> Spinoff
Next Up: Editor's Pick