Why a Free Speech Fight is Causing Protests at Yale

Yale University students and supporters participate in a march across campus to demonstrate against what they see as racial insensitivity at the Ivy League school in New Haven, CT on Nov. 9, 2015.
Ryan Flynn—AP
By Justin Worland

Hundreds of Yale University students marched in protest this week as tensions boiled over in response to what they called the racial insensitivity of the school’s administration. The students’ frustration has been building for some time in response to a series of issues, but it was most recently sparked by a clash over potentially sensitive Halloween costumes.

Why do students care about Halloween costumes?

Costumes became an issue at Yale after a group of administrators from various committees and offices sent a guidance letter to students urging them to avoid insensitive costumes including those that feature blackface, turbans and mock Native American headdresses. The email was framed as a call for Yale students to be “safe and thoughtful” on Halloween.

Controversy began when lecturer Erika Christakis sent an email to the students she oversees in her capacity as associate master at one of Yale’s residential colleges objecting to the call for sensitivity. “Is there no room anymore for a child or young person to be a little bit obnoxious … a little bit inappropriate or provocative or, yes, offensive?” she wrote.

Why are some students upset about Christakis’ letter?

The email angered many students who say that as a college master, Christakis should be chiefly concerned with the wellbeing of her students, not promoting academic free speech that is potentially offensive.

Many students signed an open letter to Christakis that reads, in, part, “We are not asking to be coddled… [We] simply ask that our existences not be invalidated on campus. This is us asking for basic respect of our cultures and our livelihoods.”

One student confronted Yale Professor Nicholas Christakis, Erika’s husband and master of the residential college, in a video that has gone viral. In the video, the student tells Christakis that the email and the attitude created an unsafe space. “In your position as master it is your job to create a place of comfort and home,” the student says. “By sending out that email, it goes against your position.” The student replies with obscenities after Christakis says he disagrees.

Have there been other racial issues at the school?

Even before the Halloween costume dispute, racial tensions had been elevated at Yale this fall over a number of concerns, including a paucity of black faculty members and recent attention over the school’s historic ties to slavery. Many called on Jonathan Holloway, Yale’s first black Dean of the College, to take a more active role making Yale a comfortable place for students of color.

The school then became the focus of national attention when students alleged that members of Yale’s Sigma Alpha Epsilon told women of color they couldn’t enter a Halloween party thrown by the fraternity because it was a “white girls only” party, according to a Yale Daily News report. The national chapter of the fraternity has said it will investigate. The chapter denied the allegation.

How has Yale responded?

As students’ outrage over grew over the past week, Yale President Peter Salovey said in a Nov. 6 message to the community that he was “deeply troubled” by accounts of distress over racial issues. “We must act to create at Yale greater inclusion, healing, mutual respect, and understanding,” he said. Earlier this month the university announced a $50 million initiative to increase faculty diversity. 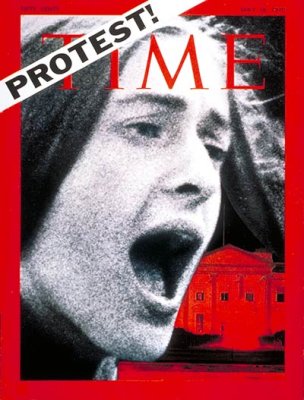 History Has Good News for Today's Student Protesters
Next Up: Editor's Pick