Fast food workers in 270 cities across the country planned to strike Tuesday to demand a $15 minimum wage, according to strike organizers.

The national protest, which will take place at McDonald’s, Wendy’s, Burger King, KFC and other restaurants, aims to draw attention to 64 million workers who earn less than $15 an hour at those restaurants and elsewhere, organizers said. Strikers also hope to gain union rights.

Workers in other fields will join in protests in 500 cities across the country following the food retailer strike, according to a Reuters report. Strike organizers hope to attract the attention of the 2016 presidential candidates, the report said.

Fight for $15, the group behind the strike, has the backing of the Service Employees International Union. The federal minimum wage is currently $7.25 an hour, which many have argued does not provide enough income for a stable livelihood. Many cities and states around the country have pushed the minimum wage higher in their jurisdictions. 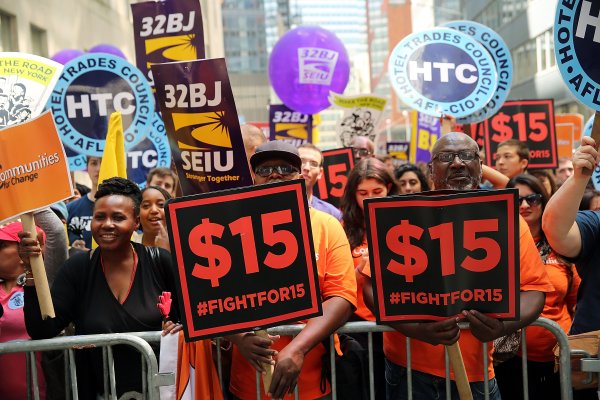 Fast-Food Workers Take Aim at Elections
Next Up: Editor's Pick