Mary Beard on SPQR, Ancient Rome and the Migrant Crisis

The classicist Mary Beard may be the only writer who could get away with the pithy first line of her new book: “Ancient Rome is important.” Coming from a less preeminent figure, it might seem utterly, boringly obvious. But coming from her, it serves as an assertive reminder: Pay attention to this chunk of history; its questions and problems are still playing out today.

Beard’s new book is SPQR, that is, “Senatus Populusque Romanus,” or “The Senate and People of Rome,” an abbreviation that still emblazons trash cans and manhole covers in the city today. The volume ranges from Rome’s earliest days to Emperor Caracalla’s decision in 212 C.E. to extend citizenship to all the free inhabitants of its borders, some 30 million people. Throughout the centuries that she examines, Beard is careful to always explain where the version of the story that we’re familiar with is not true to history (for instance, Julius Caesar never said “Et tu, Brute?”) and where we simply don’t know enough about events to paint a full picture of their details. But what she does share is a compelling vision of a society that is very like our own and, in other ways, completely unrecognizable. TIME caught up with to Beard to discuss how reading about Rome can help change our thinking on contemporary issues.

TIME: You’ve said that writing this book came out of being in your late middle age. What do you mean by that?

Beard: It’s like when people ask you how long did it take to write: the answer is either 18 months or 40 years, because it’s part of what you’ve been thinking about. What you see in a book like this is the experience of teaching undergraduates. People say, “But undergraduates aren’t typical readers, they’re specialists, they’re not like the general reader.” Well, actually, they’re not so very different. You get to know through the hard way what kind of thing works with an undergraduate, where suddenly they [go], “Ah, so that’s what it is.”

You write that there aren’t actual lessons we can learn from Rome, but certainly there are resonances. What resonances do you see in the large-scale granting of citizenship and the massive migration of slaves across Rome?

But the underpinning of Rome in its foundation myths [is] as a place of asylum: Aeneas is a war refugee, Romulus has no citizens, so he says, “Come on, everybody! Runaways, criminals, ex-slaves, you just come here, this is an asylum!” If you live in a culture with that as its founding mythology, then I suspect you think differently. This is where you kind of can’t learn from it, just thinking about Rome in those terms, thinking, “They have defined this entirely differently from us,” makes you look at your own assumptions differently. It doesn’t mean that you say, “Oh, I know, let’s do it like the Romans did then.” Because that’s not the point. There is a very journalistic desire to—and I work a bit in journalism too—but to have a column of 10 things the Romans can teach us about the current crisis, and I say, I don’t think they can teach us anything about the current crisis—but they can teach us to think harder about it. But that doesn’t make such good journalistic copy.

You note that there are so many events in Roman history where we really don’t know how exactly it all went down. What moment do you most wish you could go back and observe as a fly on the wall?

There’s too many! I’d quite like to be in Caligula’s court. Living in the back room, somewhere, and just being able to observe. Most of the time one thinks it would be safer not to be there. Would I really want to see the assassination of Julius Caesar? I’m not sure that I would. I think it could have been intensely boring in the Senate when Cicero was talking to Catiline. I’d love to know if Nero really did murder his mum. There’s a wonderful moment in Tacitus when he tries to murder his mum by collapsing boat, and he sends her out and the boat collapses, but she’s a game old bird and she swims to shore, so it doesn’t work. I’d like to see that. But is there a single moment where being there would change your view of anything? No.

Who do you think is the most unfairly scapegoated figure in history?

I think every bad Roman emperor, probably. I wouldn’t know if they were nice or nasty, but what is absolutely clear is we can’t know, because as I said somewhere in the book, in this monarchy—which effectively it is—the lasting reputation of the individual emperor was often determined by his successors. If you die in your bed and your son succeeds you, you will have a good reputation. If you are assassinated, the next regime damns you. We cannot now tell whether the emperor was assassinated because he was bad, or whether because he was assassinated, he had to be portrayed as bad.

From the modern world, [we know] some bad men get assassinated and some good men. With someone like Nero, we know that after Nero’s forced suicide, effectively, there were false Neros who appeared, saying “I’m Nero!” Now, it seems very unlikely that anybody should impersonate an emperor who is universally loathed. And even the descriptions of the assassination of Caligula suggest that the people were upset at the emperor being assassinated. Part of that is a terribly snobbish version, actually—“We elite knew what a rotter he was. The poor old poor, they didn’t understand, they wept and wailed.” There’s too many variables in there. We all need to think hard about what it would be like to tell the story differently.

Your book is sympathetic to those for whom we have a record of someone criticizing them, but no record of their defense—for instance, Clodia, who’s accused of being so promiscuous. How do you think that relates to today, when anyone can be maligned on the Internet because everyone has a voice, but at the same time, anyone can fight back?

I think some people don’t fight back. I used to think that the British press were particularly awful to Cherie Blair. I think Blair’s foreign policy was a complete disaster, but the British press, when they wanted to explain why Blair took unexpected moves, they did create Cherie as the power behind the throne. You know, “Tony did this because Cherie couldn’t stand Gordon Brown.” She was in a position, I think, where she couldn’t answer back, and that is a bit like some of these people from the past, when you just have to say, “Look, hang on a minute, let’s see it from their point of view.” It doesn’t mean you then accept that, but it is quite important to try to see it from their point of view.

If you had to pick a time and place in the past to live in, which would it be?

I would not pick any. I’m a woman! It’s just about conceivable to me that a man might be able to find someplace, but it would all be a hell! There’s no political rights, death in childbirth, and no aspirin! Never. I like now. 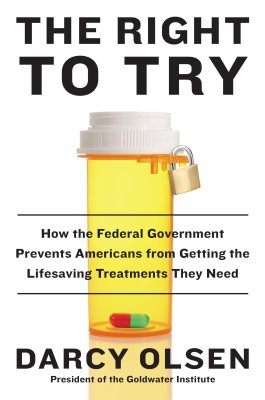 Dying Patients Should Have 'Right to Try' New Treatments
Next Up: Editor's Pick