It took a while for the fireworks to begin.

Although Tuesday night’s debate on Fox Business got off to a wonky start, it wasn’t long before candidates began turning on each other — and on the moderators.

Talk about the economy, budgeting and the minimum wage dominated the opening moments of the debate. Instead of confronting Republican rivals, the candidates were quoted economic statistics and asked to address how they would improve it.

It was exactly the dud that organizers wanted after last week’s much-maligned session on the same topic on CNBC. Business tycoon Donald Trump and retired neurosurgeon Ben Carson both said they would not increase the minimum wage. Sen. Marco Rubio of Florida extolled the virtues of vocational training, while Ohio Gov. John Kasich said contenders need to consider the human impacts over economic philosophy.

In the debate’s early moments, it seemed like a giant yawn.

When the biggest story in the GOP campaign—allegations that Carson misled supporters about his self-described violent youth—it was done so only briefly. Asked if Carson was hurting his campaign as he faced questions about his biography, Carson said his friends know he’s an honest person.

“Thank you for not asking me what I said in the 10th grade. I appreciate that,” Carson said dryly. “The fact of the matter is, we should vet all candidates. I have no problem with being vetted. What I do have a problem is being lied about.”

Carson then criticized Clinton as someone he said had been proved as a liar in her remarks on the Sept. 11, 2012 attacks on the U.S. mission in Benghazi, Libya. The mention of her name won jeers and the criticism applause.

Much of the debate centered on broad criticism of tax loopholes, the IRS and the economic implications of changing the immigration system. Yet, to a tee, all defaulted to telling voters to go to their campaign websites for specifics.

“But you haven’t told us how you’d pay for it,” moderator Maria Bartoromo challenged Sen. Ted Cruz of Texas.

At other points, the candidates tried to link the economy to faith. “There are more words in the IRS Code than the Bible, and not one of them is good,” Cruz said. And Carson said he would base his tax structure on the one found in the Good Book, where everyone pays the same proportion of their income. “You can’t have a strong nation without strong values,” Rubio said.

At times, however, the debate seemed to slip through Trump’s fingers. At one point early on, he lashed out at Kasich: “I don’t have to hear from him, believe me.” Trump also tried to take control of who was allowed to answer what questions—quickly earning him chiding from the hosts.

“Thank you, Donald, for letting me speak at the debate,” former Florida Gov. Jeb said. “What a generous man you are.”

In this year of unpredictability among the GOP’s base, Carson and Trump are the frontrunners, with others such as Rubio, Cruz and Bush chasing close behind. Tuesday’s debate is likely the last chance they have to confront their party’s unexpected favors before the Dec. 15 debate on CNN.

Read More: How Christie and Huckabee Will Work Around Debate Diss

Even so, Iowa is still months away, and voters are only now starting to tune in. As they do, they’ll see a topsy-turvy political season that has seen two major Republicans exit the race, others struggle to remind voters why they were once considered frontrunners and political novices stay in the top tier. Tuesday’s debate is likely to add even more uncertainty. 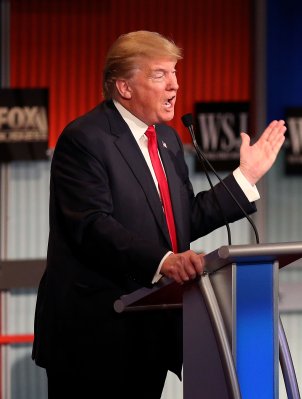 Donald Trump Didn't Like Carly Fiorina 'Interrupting Everybody'
Next Up: Editor's Pick