Missouri President Toppled By the Power of the Student Athlete

Missouri football just earned one of the biggest wins in sports history.

On Monday Timothy Wolfe, president of the University of Missouri, resigned after weeks of student protest regarding his administration’s handling of several racially charged incidents on campus. Later in the day, the Chancellor of the school’s flagship Columbia campus, R. Bowen Loftin, announced that he would step down at the end of the year.

On Saturday, Missouri’s football team galvanized the protest, and delivered what amounted to last rites on Wolfe’s presidency: At least thirty players said they would not participate in any football-related activities until Wolfe left office. If that meant skipping the Nov. 14 game against BYU in Kansas City, so be it. The team did not practice Sunday. To show that Missouri football meant business, coach Gary Pinkel sent out a picture of the team on Twitter:

“Never thought I would be in place or time like this to actually make a difference,” Russell Hansbrough, a starting running back for the Missouri team, wrote on Twitter. Who can blame him for feeling some surprise? For decades, pro and college athletes largely played it safe: focus on the field, collect a paycheck — or for college kids, just appreciate that scholarship while the coaches cash millions — and stick to sports. But that was all before Ferguson and #blacklivesmatter and All Players United, a protest movement started two seasons ago demanding basic benefits and protections for college athletes, and the Northwestern football unionization push.
Now athletes realize they’re not just the entertainment. They’re not just a product of the world around them. They can shape it. Like Missouri did.

So they’re taking action. Last year, five St. Louis Rams entered the field with their hands in the “don’t shoot” pose to salute Michael Brown and the Ferguson protestors. A Cleveland Browns player wore a “Justice for Tamir Rice” shirt. LeBron James, Derrick Rose, Kevin Garnett and other NBA players donned “I Can’t Breathe” t-shirts as a show of support for Eric Garner, the African-American man from New York City who died after a white police officer placed him in a chokehold.

Such gestures call attention to social justice, and have clear impact. But the Missouri strike is historic. Two years ago the Grambling football team forfeited a game because of the substandard conditions in which they practice and played. Most major college athletes have good reason to gripe, given they still receive a minuscule piece of the exploding revenue pie they’ve helped create. The Missouri players, however, fought for something beyond themselves. They didn’t protest their lack of pay. They stood in solidarity with the student body. A fair criticism of college sports today: the athletes operate in their own silo, like a for-profit subsidiary of these educational institutions, far removed from everyday campus life. But these Missouri athletes cheered wildly for the students, rather than just the other way around.
Missouri’s football players exercised their leverage, and empowered college athletes around the country. With their 1-5 record in the powerful Southeastern Conference, the Tigers are no contenders for a national championship. They may not even make a bowl game. So what? No team in college football has ever accomplished more. 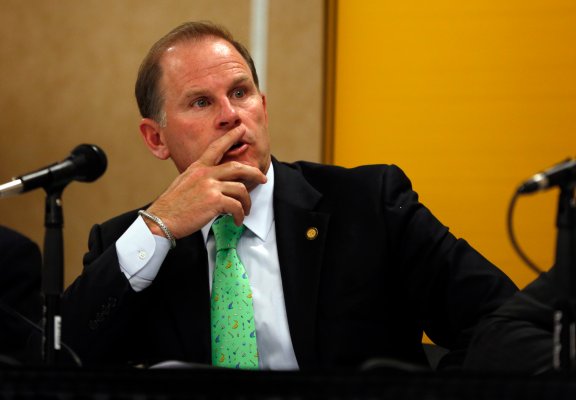 University of Missouri President Resigns After Racism Protests
Next Up: Editor's Pick