University of Missouri president Tim Wolfe resigned Monday under intense pressure from students and faculty over the school administration’s handling of racial issues. Later in the day, the Chancellor of the school’s flagship Columbia campus, R. Bowen Loftin, announced that he would step down at the end of the year.

Numerous voices at the school, including Missouri’s football team, faculty and the student government, had called for Wolfe’s resignation after a series of racist incidents at the school.
“The frustration and anger I see is clear, real and I don’t doubt it for a second. The faculty and staff have expressed their anger, their frustration, that too is real,” Wolfe said Monday morning. “My decision to resign comes out of love, not hate.”
Wolfe’s resignation comes at the height of widespread unrest at the University of Missouri, where the administration’s handling of racism has caused deep divisions on campus. Over the fall, one intoxicated white student harassed the Legion of Black Collegians with the N-word, and another student reported being subjected to racial slurs on a separate occasion. The most recent racist incident came on Oct. 24, when a swastika was drawn with human feces on a college dorm’s white wall.
A wide array of voices had called for Wolfe’s removal. More than thirty football players said they would not participate in practices or games until President Wolfe resigned or was fired, with the head football coach Gary Pinkel tweeting his support.

A group of university faculty said on Monday they would begin a two-day walkout at the University of Missouri to protest the school’s handling of racist incidents on campus. A graduate student, Jonathan Butler, ended on Monday morning a seven day a hunger strike that he said would last until Wolfe was removed.

The Missouri Students Association said earlier on Monday that “the academic careers of our students are suffering” and “the mental health of our campus is under constant attack.” Co-signed by the student government president, vice president and top officers, the letter formally demanded that Wolfe resign.
Michael Sam, the first openly gay football player to be drafted to the NFL, and a Mizzou alum tweeted his support.

Despite Wolfe’s resignation, the University of Missouri has yet to agree to some of the students’ demands. The ConcernedStudent1950 protest organization has called on the school to overhaul the way it handles racial harassment. The group also demands an awareness curriculum and an increase of black faculty and staff to 10% by the academic year 2017-2018. 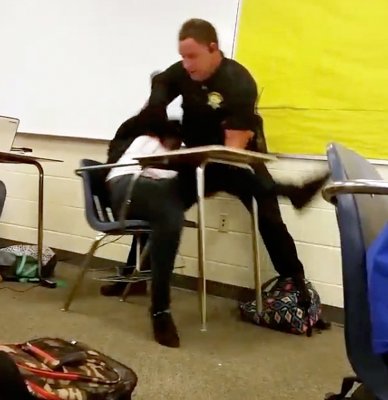 Students Walk Out to Support Fired School Deputy
Next Up: Editor's Pick