Ken Ham: Here's the Deal With Ben Carson, the Pyramids and the Bible

Ideas
By Ken Ham
Ken Ham is the president of Answers in Genesis and the Ark Encounter project.

In regard to presidential candidate Dr. Ben Carson’s reported comments on the Egyptian pyramids, I first of all need to declare my respect for this great medical doctor and his stand on the Bible (although I disagree with some of his views on the book of Genesis, like the length of the days of creation). I should also state that I am not publicly supporting or opposing any particular candidate for president, and I do not believe someone should vote for a candidate simply because they happen to have an R (Republican), D (Democrat) or I (Independent) next to their name on a ballot. As a Bible-believing Christian, I judge what each candidate believes against the absolute authority of the Word of God and vote accordingly.

The construction of the pyramids is not specifically mentioned in the Bible. What we believe about their purpose does not impinge on any biblical doctrine. People are free to have different interpretations in regard to how these impressive structures were built and for what purposes, just as what occurs in the secular world when scientists have disagreements over their various models. Importantly for Christians, they should not knowingly compromise God’s Word in any way when they offer their interpretations.

I would not personally accede to Dr. Carson’s idea that the biblical Joseph used pyramids for grain storage (as reported by the media). From all I have read in the Christian and secular literature about Egyptian archaeology (and we have two staff members who are knowledgeable in this area who would concur with me), the pyramids were built in accordance with Egyptian religious beliefs and were primarily tombs for the royal dead, supposedly to ensure their well-being in the afterlife. Grain and other items were placed in these elaborate tombs in the belief the deceased person would need them for life after death. Also, it seems the greatest of the pyramids were built centuries before the time of Joseph.

Just as Christians can respectfully disagree on their interpretations of extra-biblical topics like the pyramids, not surprisingly both Christians and non-Christians can have different interpretations of the same evidence (just like the issue of origins: creation vs. evolution) as they try to understand the past. Christians like Dr. Carson who believe the Bible is a true history book can also differ among themselves in regard to some of the models they develop as they try to use God’s Word to interpret the past. Models are always subject to change, though for Christians the starting point of God’s Word is not subject to change.

Ultimately, what Dr. Carson believes about the pyramids is insignificant compared to what he believes about the relevant issues of today (e.g., the debate over marriage and abortion) as they relate to the Word of God. I admire any candidate, fallible men and women that they are, who will stand up for a worldview built upon God’s Word, even if we have our theological differences and hold contrary views of historical events. 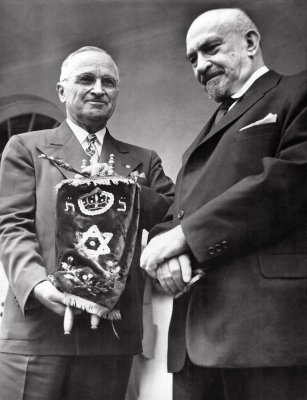 What Happened the First Time an Israeli Leader Met With a U.S. President
Next Up: Editor's Pick