What Actress Hedy Lamarr Said About Her Skill as an Inventor

During the height of her movie career, Hedy Lamarr—who was born on this day, Nov. 9, in 1914—got most of her press for her acting roles and for her many marriages and divorces. She was a beauty who made her name by appearing nude in the 1933 Czech film Ecstasy, but she didn’t necessarily hold that particular quality in high regard. “Any girl can be glamorous,” she once said. “All you have to do is stand still and look stupid.”

She proved that she was anything but, however, as the 20th century moved into its second half and her film appearances grew fewer. “Admirers of the 1930s movie Ecstasy liked the unadorned way Hedy Lamarr took to the water-but they might be surprised to learn that Hedy, now sixtyish, has genuine nautical skills,” TIME noted in 1974 when she was fêted on National Inventors Day. “She is co-inventor of a system for guiding torpedoes to their targets that was considered for use in World War II.”

In response to the praise, she demurred: “Improving things comes naturally to me.”

Still, Lamarr was no stranger to being the center of attention. When she died in 2000, her former costar Bob Hope wrote a remembrance for TIME, in which he recalled her natural ability to do just that:

For your security, we've sent a confirmation email to the address you entered. Click the link to confirm your subscription and begin receiving our newsletters. If you don't get the confirmation within 10 minutes, please check your spam folder.
Most Popular on TIME
1
Read Donald Trump's Full Inauguration Speech
2
All the Marvel Clues You Missed in WandaVision's First Two Episodes
3
Big Tech Made the Right Call About Trump 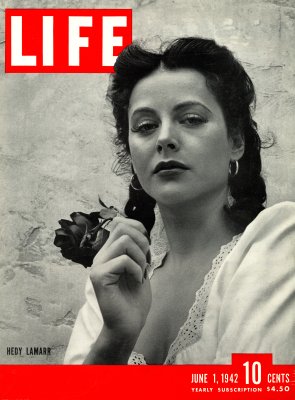 LIFE With Hedy Lamarr: Stardom, Scandal and One Amazing Invention
Next Up: Editor's Pick