A group of faculty staff will begin a two-day walkout at the University of Missouri to protest the school’s handling of racist incidents on campus, joining student activists and the football team in a widening clash with the administration.

“We, the concerned faculty of the University of Missouri, stand in solidarity with the Mizzou student activists who are advocating for racial justice on our campus,” said a statement released late Sunday night by the so-called Concerned Faculty group, ABC reports. The faculty planned to meet at a central quadrangle at 10am and respond to student questions in the form of a teach-in, according to the statement.

The University of Missouri has been deeply divided in recent weeks over the school administration’s handling of several racist incidents that occurred this fall, including one when intoxicated white students harassed the Legion of Black Collegians with the N-word, and another student reported being subjected to racial slurs. The most recent racist incident came on Oct. 24, when a swastika was drawn with human feces on a college dorm’s white wall.

The Missouri Students Association wrote in an open letter on Monday that “the academic careers of our students are suffering” and “the mental health of our campus is under constant attack.” Co-signed by the student government president, vice president and top officers, the letter formally demanded that Missouri System President Tim Wolfe resign.

More than thirty football players have said they will not participate in practices or games until President Wolfe resigns or is fired, with the head football coach Gary Pinkel tweeting his support. A graduate student, Jonathan Butler, is now seven days into a hunger strike that he says will last until Wolfe is removed.

The ConcernedStudent1950 protest organization has demanded Wolfe be removed and that the university overhauls the way it handles racial harassment. The group also demands an awareness curriculum and an increase of black faculty and staff to 10% by the academic year 2017-2018.

The call for reform has reached the office of Missouri Gov. Jay Nixon. “Racism and intolerance have no place at the University of Missouri or anywhere in our state,” Nixon said. “Our colleges and universities must be havens of trust and understanding. These concerns must be addressed to ensure the University of Missouri is a place where all students can pursue their dreams in an environment of respect, tolerance and inclusion.”

Other Mizzou alumni, including its team’s onetime football star Michael Sam, lent their support to the students:

Wolfe, the system president, apologized for an incident last month when his car allegedly bumped into a protest group, and said he had met with Butler, the hunger striker. “We are open to listening to all sides, and are confident that we can come together to improve the student experience on our campuses,” Wolfe said in a statement. “Racism does exist at our university and it is unacceptable.” 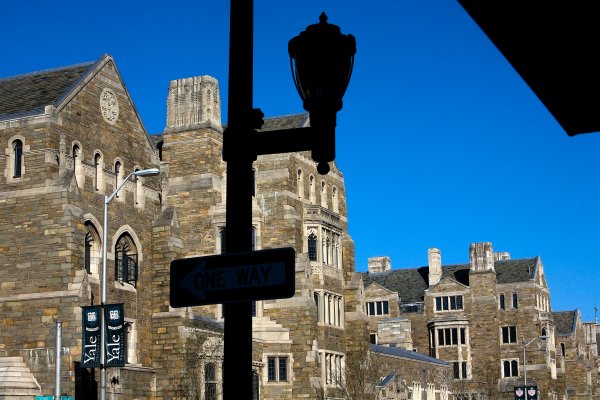 Yale Fraternity Accused of 'White Girls Only' Party
Next Up: Editor's Pick