One by one, parliamentary candidate Khin Moht Moht Aung wandered 18 polling stations in Rangoon’s Chinatown, delivering coffee to exhausted election monitors from her National League for Democracy (NLD). They were looking for any electoral irregularities in Burma’s most keenly anticipated balloting in a quarter-century. But the 30-year-old candidate needn’t have worried about shenanigans in her constituency during the historic Nov. 8 polls. By the next day, the opposition activist had been declared the victor. On the evening of Nov. 9, at Rangoon’s NLD headquarters, Khin Moht Moht Aung surveyed a sea of supporters chanting “win, win, NLD” and grinned. “I’m a little bit excited,” she said, with the kind of understatement uncommon in a politician.

Burma itself is more than a little bit excited. The NLD, headed by adored Nobel Peace Prize laureate Aung San Suu Kyi, has proclaimed itself a landslide winner, even as official poll results trickle in far behind the opposition party’s own count. On Monday afternoon, party elder Win Htein told TIME that the NLD has claimed 70% of the votes counted so far, and as the hours went on, a giant screen at NLD headquarters broadcast win after win for Suu Kyi’s party. The electoral commission’s information was more parsimonious. By late Monday evening, it had released official results for only a fraction of constituencies, although by its count the NLD, too, was far ahead of the other 90 registered political parties.

If the 70% figure holds, it is the kind of dominance that would enable the NLD to form a government — as long as the military and its proxy party are willing to accept the results. (Both have indicated they will, unlike what happened in 1990 when the military regime ignored the NLD’s victory in nationwide polls.) As of early next year, when the new parliament convenes, Burma could well enjoy its first democratically elected government since a 1962 army coup turned the nation now officially known as Myanmar into a pariah state. “I’m happy, excited and satisfied,” says Win Htein, who spent 14 years as a political prisoner, some in solitary confinement. “At the same time, I feel we have obligations to live up to the support of the people.”

Many of the NLD’s expected new MPs are not household names. Some are opposition activists, like Khin Moht Moht Aung, who toiled underground for years, back when being in possession of an NLD pamphlet could warrant a hefty jail term. Others are newly drawn to politics, doctors or lawyers or entrepreneurs who want to leave their country in better condition for the next generation. Wai Phyo Aung, a doctor, won a seat for the NLD in the lower house, representing Rangoon’s Thaketa township, where another NLD parliamentarian was slashed with a machete during a campaign event last month. “It’s so clear how our people are thirsty for change,” he says. “The aim of a political party is to serve the people. We have been waiting for this day.”

The anonymity of the NLD’s representatives is partly by design. During the campaign, Suu Kyi, 70, urged Burmese to vote for the party, not the candidate. Outside of a Chinatown polling station in Rangoon, a 68-year-old taxi driver named Kyaw Sein Hla said he wasn’t sure which specific candidates he had chosen on the ballot. “I voted for the NLD,” he said. “I voted for Aung San Suu Kyi.” (One of the candidates was, in fact, Khin Moht Moht Aung.)

There are plenty of big names associated with the ruling Union Solidarity and Development Party (USDP), the military’s proxy that has ruled since flawed 2010 elections. Some of the biggest names, however, were toppled in the Nov. 8 vote, which has resulted in a drubbing that even the USDP recognized on Monday afternoon. Among those conceding defeat were the acting chairman of the USDP; a provocateur who once suggested bullets as a possible solution to ethnic strife in northern Kachin state; and Shwe Mann, the influential parliamentary speaker who was considered a reformer in the ruling party.

At least Shwe Mann was generous in defeat, congratulating his NLD opponent, a former classmate. In August, Shwe Mann was purged from his USDP leadership position, presumably because of his rapprochement with Suu Kyi. A former general who won top military honors for battles in ethnic areas of Burma — where military abuses of civilians ran and still run rampant — Shwe Mann quickly refashioned himself as a civilian politician after the 2010 polls, which the NLD boycotted since its leader was still under house arrest. As his father took up his new Speaker duties, one of his sons fretted about having to scour the Internet for primers on parliamentary democracy. “It is very complicated,” Toe Naing Mann told TIME back then. “I wrote up many reports for my father on how a congress works.”

Democracy is, indeed, complicated — and Burma’s stunted version of it more so. The junta that orchestrated the country’s political transition reserved choice leadership posts and a quarter of parliament for the military. Suu Kyi, who spent a total of 15 years under house arrest for daring to defy the military, is precluded from the presidency, although she has waved away such details by announcing she will serve in a position “above the President” if the NLD’s victory is confirmed.

While there’s little doubt that the NLD has done well in urban areas where the votes have been counted the fastest, it’s not clear what the outcome will be in rural areas dominated by ethnic minorities, who make up at least one-third of the country’s population. By Monday evening, at least three ethnic parties had picked up seats in Burma’s far west and north. If the NLD fails to secure enough seats to form a government, these ethnic parliamentarians could serve as kingmakers in choosing Burma’s next President.

But so far, the momentum is clearly with the party that was robbed of its victory 25 years ago by the military regime. On Nov. 9, NLD supporters — and there are millions upon millions in Burma — allowed themselves one of democracy’s most treasured rituals: jubilant street celebrations in front of the party headquarters in Rangoon. Just a few years ago, stopping in front of the NLD invited investigation by Special Branch, which scrutinized the comings and goings at the party office from a tea stall across the street. Today, the crowds had no such worries. Couples smiled for selfies, their faces adorned with stickers of the red NLD flag, emblazoned with a golden peacock and star. Trishaw drivers danced. Burma’s hottest pop stars announced the results over a loudspeaker, before leading the party devotees in song. “I came here to enjoy the victory of the NLD,” says Thiha Aung, a civil servant with the Transport Ministry. “Our future is blooming.”

— With reporting by Thurein Win / Rangoon 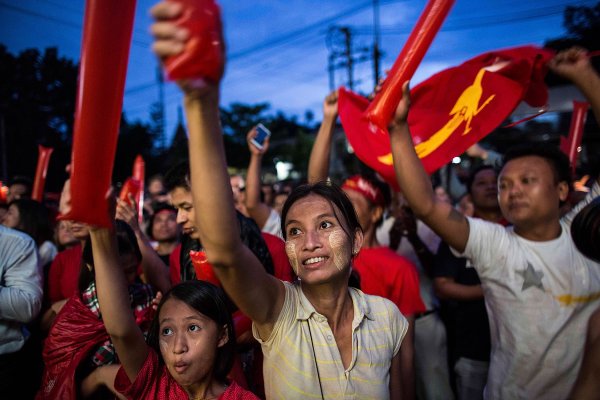 Inside Burma's First Free Nationwide Election in 25 years
Next Up: Editor's Pick