Egypt Detains a Top Journalist as Fears of a Crackdown Grow

Egypt’s military intelligence detained one of the country’s leading investigative journalists and human rights advocates on Sunday, a move that comes amid international scrutiny on Cairo over a Russian airline crash.

The detention of Hossam Bahgat, 36, has been widely regarded as a signal of the Egyptian government’s ongoing clampdown on its critics.

The circumstances of Bahgat’s detention remain unclear. He appeared for interrogation by the military intelligence in Cairo on Sunday morning. The independent news website Mada Masr, where Bahgat is a contributor, reported that the journalist had been handed over to military prosecutors. Bahgat also told his outlet that he may face charges of publishing “false information that harms national interests.”

As a journalist, Bahgat is known for meticulous investigative reporting for Mada Masr, a respected English-Arabic organization founded in 2013. Prior to entering journalism, Bahgat was a giant of Egypt’s human rights movement. In 2002, he founded the Egyptian Initiative for Personal Rights (EIPR), the country’s premier rights group.

“Hossam Bahgat is being formally charged by the military prosecution. He still doesn’t know what charges & has asked for lawyers,” tweeted Heba Morayef, the current associate director of EIPR.

“We are waiting outside the military court complex,” she said in an update published later on Sunday evening. “Hossam’s lawyers have all gone in, no phones allowed so updates once they come out.”

Bahgat has published a series of detailed exposés about the military judiciary that is now holding him in custody. His most recent piece explores a secret military trial of 26 officers accused of plotting a coup. Last year he wrote one of the most illuminating reports to date on Ansar Beit al-Maqdis, the Sinai-based militant group that later declared itself part of the Islamic State of Iraq and Greater Syria (ISIS). The militant group claims it brought down the Russian passenger plane that crashed in Sinai on October 31, killing all 224 people on board.

There is mounting concern that a smuggled bomb may have exploded inside the plane. A member of the multi-nation committee investigating the crash told Reuters on Sunday that investigators are “90% sure” that a sound picked up by plane’s flight recorders was caused by a bomb.

Egypt’s President, Abdul Fattah al-Sisi, is currently facing international scrutiny over the Russian plane crash. Since coming to power in the aftermath of a military takeover, Sisi has presented himself as a champion of counterterrorism. Critics argue that the government’s campaign against political opposition has been detrimental to the fight against the insurgents.

“The arrest of Hossam Bahgat today is yet another nail in the coffin for freedom of expression in Egypt,” Philip Luther, Director of the Middle East and North Africa Programme at Amnesty International, said in a statement. “The Egyptian military cannot continue to consider itself above the law and immune from criticism.” 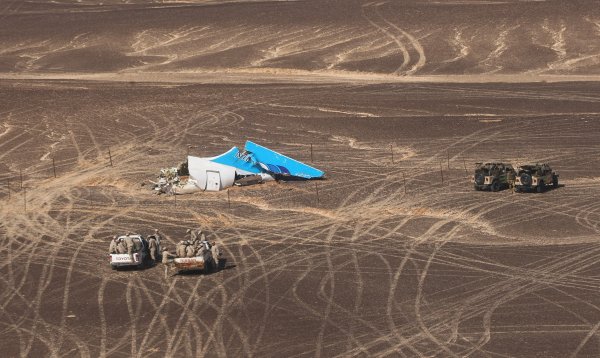