Indian Prime Minister Narendra Modi’s Bharatiya Janata Party (BJP) was heading for a crushing defeat in critical state-level elections on Nov. 8, with the rout highlighting his rapidly falling stock among voters after just 18 months in office.

In May 2014, Modi came to power in India with a stunning electoral victory that saw the BJP secure the biggest national parliamentary majority in three decades, including a successful run in Bihar, where the Hindu nationalist party steamrolled a divided opposition.

But on Nov. 8, early results after a month-long contest for seats in the state legislature showed a significant reversal in support for Modi’s party in the face of an opposition alliance that, by late afternoon local time, had won or was leading in nearly 180 seats out of the 243 up for grabs in the Bihar assembly. As the results flooded in, Modi conceded defeat in a phone call to the leader of the opposition alliance, the current Bihar chief minister Nitish Kumar.

Modi was not a candidate in the Bihar elections but his party projected him as the face of its campaign, effectively turning the contest into a referendum on his leadership, instead of naming a chief ministerial candidate to take on the united opposition’s nominee. As public debate across India shifted from the economic promises that brought Modi to power in 2014 to questions about religious intolerance under his administration, the BJP faced criticism for running a controversial campaign that attempted to divide the electorate along religious lines in a state where Muslims make up around 17% of the population. (Nationally, Muslims account for around 14% of Indians.)

Issues such as the protection of cows — considered sacred by the majority Hindu community — were raked up, while Modi’s top strategist, the BJP president Amit Shah, sought to whip up nationalist sentiment by telling voters at an October rally that, were his party to lose the polls, celebratory crackers would be lit across India’s western border in Muslim majority Pakistan, the country’s arch regional foe.

“People have outright rejected attempts at polarization and given a decisive mandate,” Kumar told reporters at a press conference in Bihar’s capital Patna.

The victory was also hailed by Rahul Gandhi, whose Congress party Modi’s BJP ousted in last year’s national elections. The Congress was a junior partner in the opposition alliance that defeated the BJP in the Bihar contest.

“This is a message against putting Hindus against Muslims and making them fight to win elections,” he said. “Prime Minister Narendra Modi has become arrogant. He should work on toning it down as it will benefit him and the country. Modi should stop campaigning and start working.”

The loss is the BJP’s second state-level poll defeat this year. In February, support for Modi crumbled in the face of a challenge from an upstart anti-corruption party in local elections in New Delhi. But the national capital is far smaller and less politically significant than Bihar, the country’s third most populous state with some 110 million people. Although one of the country’s poorest provinces, it a key political battleground with more voters than either Germany or the Philippines.

Losing Bihar could make it harder for Modi to govern India. While it controls the lower house of the national parliament, Modi’s BJP remains in the minority in the upper house, whose members are elected by state legislatures such as the one in Bihar. Both houses need to approve of the government’s policies for them to become law. Already, the lack of support in the upper house has forced Modi’s administration to withdraw a planned measure to change India’s land acquisition laws, while another proposal to introduce uniform taxes on goods and services across the country faces delays. 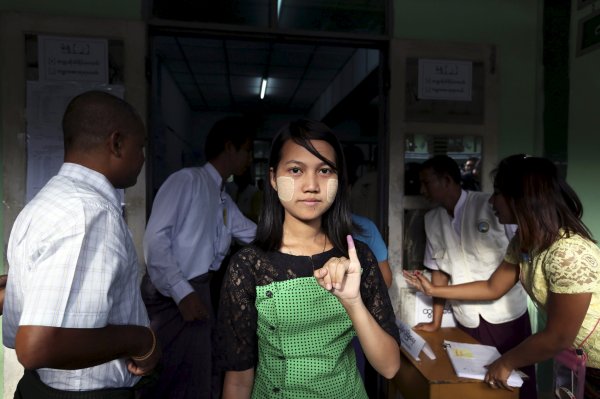 Burma Votes in Historic Elections
Next Up: Editor's Pick