Fallout 4 Review: An Epic RPG Haunted by Its Predecessor

Fallout 4 wants us to remember what it felt like to play games in 2008.

That’s not such a bad thing. After all, 2008 was a good year. It gave us a subversive parkour fantasy (Mirror’s Edge), a charming Brit-fantasy romp (Fable II) and a superlative murder-mystery (Persona 4). And of course Fallout 3, which proved the bleakly comic post-apocalyptic series could survive—indeed flourish—once more.

But what happens when you rekindle a gameplay system and interface that’s seven years old? You get something that feels unmoored in time, a world of familiar to-ing and fro-ing that for those of us who poured untold hours into Fallout 3, may trigger reflexive responses—remembrances of what it felt like to range across all those sewage-brown landscapes, or toggle bazillions of green phosphor screens, or perish in brutally explicit slow motion for the umpteenth time.

Even the 23rd century setting feels somewhat refurbished, a modest relocation up the northeast American coast from Washington D.C. to Boston, a still-lumpen wasteland populated by mutant fauna, ramshackle houses, crumbling overpasses and tattered colonialism. The twist this time involves our first in-game look at life just before the bombs fell. It’s only a glimpse, alas, there less to unpack the franchise’s pre-catastrophe mysteries than set up the origin story and plot hook.

Developer Bethesda steps a little on its own toes here, failing to catch its storytelling chops up to the times. Characters reacting to horrific events come off as insincere, too hastily pushed through then released from emotionally crippling moments to serve dated assumptions about pacing. The protagonist in particular, fully voiced for the first time in a Fallout game, seems almost glib in response to the event that catalyzes your journey, partly because Bethesda needs to get you out the door and get to shooting stuff.

It doesn’t help that the game has some trouble spooling up. Fallout 3 had the town of Megaton a few klicks down the road from your entry point, where some of that game’s richest moments and craziest decisions played out. The game’s intimidating vastness was inflected by that initial encounter with a settlement on the verge, your sense of aimlessness countered by a cloistered, tumbledown municipality that aimed you straight as an arrow.

Fallout 4 by contrast places its Megaton-equivalent halfway across its vast new landscape, barely mentioning it until you actually go there. If you play like me, methodically working through checklist items or exploring unvisited areas (without bypassing them), you may not see it for a dozen hours or more. The lead-up time felt weirdly blank and a little disorienting, punctuated by stock battles, a few tutorials and worries that Bethesda was being too indulgently open-ended.

But once you get there and the game’s pulp plot kicks in, Fallout 4 finds its voice, unfurling conspiracies and machinations as gripping as anything in Obsidian’s 2010 Fallout 3 spinoff, Fallout: New Vegas—the series’ storytelling high-water mark. The side quests, too, feel more accomplished and logistically intricate, less like quirky rabbit holes than proper subplots. Stick with the game through its early beats, in other words, and the multiple narratives pay dividends.

Fallout 4‘s way of engaging with all that replicates Fallout 3‘s, including the iconic PIP Boy, an absurdly oversized smartwatch with minimalist controls that lets you shuffle through your inventory, fiddle radio stations or survey the map. It’s definitely a style-trumping-utility approach, still drowning in columns of electric-green text, but the game automatically pauses when you summon it. (And there’s the anti-streamlining argument: that all the tedious tab-scrolling is simply retro flavor.)

The same applies to combat, still the game’s beating heart, and still divided into realtime or quasi-turn-based rounds. Pick the latter and the game slows to a crawl, letting you pinpoint body parts or change targets completely, your skill level and distance from an enemy calculated as chance-to-hit percentiles. It’s another Fallout idiosyncrasy that the math reigns supreme, even to the point of visual farce, like when you fire a shotgun point blank at the head of a foe half a dozen times before they’ll relent and keel over.

The game’s biggest new idea involves a crafting system that lets you build structures, decorative items and defense systems in select locales, the idea being to attract other characters in the game and give you a safe place to hang your hat (and suitcases of loot) between trips. In theory, it ought to dovetail perfectly with Bethesda’s whole “go anywhere, do anything” design maxim. All the random bric-a-brac you unearth while out exploring now feeds the crafting system, rationalizing a design choice that previously felt like so much window dressing.

In practice, it feels a little clumsy, asking that you drag-and-place dingy, irregularly shaped objects around continuous 3D-space from the standpoint of a camera with limited perspective. Minecraft it’s not, and while there’s no reason to penalize the game with that comparison (it’s actually a poor analogy), I found myself eventually frustrated enough by the fussy placement process that I abandoned it altogether (to the extent the story let me).

Otherwise you’ll find plenty of checklist activities waiting for you. You can mix paint for painters, scavenge for baseball memorabilia, plumb the depths of raider- or ghoul-haunted buildings, return library books, ambush gangsters, visit a museum of witchcraft, set up radio beacons to attract new settlers, track down faint radio signals that spawn new storylines, probe other vaults, find collectibles that unlock workshop items and deep-mod weapons—all the cornucopian stuff we’ve come to expect from a Bethesda joint. And sometimes just being in this world is its own reward: Listening to Billie Holiday plaintively swing “Crazy He Calls Me” while creeping through desolate cricket-filled hills at dusk still summons chills.

There’s nothing Fallout 4 does worse than Fallout 3, that much you can depend on. 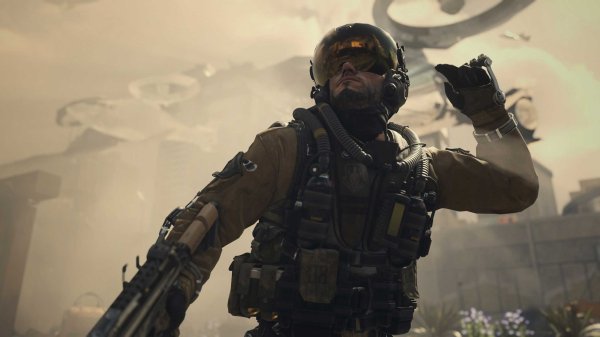 Call of Duty Movie and Skylanders TV Series Are in the Works
Next Up: Editor's Pick