Leaders of China and Taiwan Meet for the First Time

The handshake was robust, postures ramrod straight, and then Chinese President Xi Jinping and Taiwan’s President Ma Ying-jeou strode smiling toward the conference room — the first face-to-face meeting between leaders of these states since their split at the end of China’s civil war in 1949.

“No force can pull us apart,” said Xi at the opening of the talks. “We are one family.”

Ma responded by saying: “Even though this is the first meeting, we feel like old friends.”

The event, held Saturday at Singapore’s opulent Shangri-La Hotel, was meticulously choreographed. As the heads of two governments that still claim sovereignty over their combined territory, each leader simply addressed the other as “mister” rather than “president,” a term that would infer legitimacy. There was no joint statement or agreement of any kind. Even the cost of hiring the meeting room and the subsequent banquet was split between the parties, so neither could be accused of hosting the other.

“It’s historical, it’s a milestone, but the purpose is not to quicken the pace of unification or get some peace agreement or anything,” says George W. Tsai, professor at Taiwan’s Chinese Culture University. “It is a political signal.”

That need for that signal stems from Taiwan’s national elections on Jan. 16. Ma’s Party, the Kuomintang (KMT), is expected to lose badly to the Beijing-skeptic Democratic Progressive Party (DPP), led by U.S.- and U.K.-educated lawyer Tsai Ing-wen. Xi wants to cement cordial ties with China’s “renegade province” to put pressure on any new administration to maintain the status quo, while Ma — who is ineligible for reelection having already served two terms — likely has eyes on securing his personal legacy.

“The concern for independence advocates in Taiwan will always be whether this meeting will erode claims of sovereignty,” says Prof. Megan Greene, director of Kansas University’s Center for East Asian Studies. “Obviously President Ma doesn’t have that concern, but not everyone agrees with him.”

The question of sovereignty has deep historical roots. The last time Chinese Communist Party (CCP) and KMT leaders met was at the end of World War II, when “Great Helmsman” Mao Zedong and “Generalissimo” Chiang Kai-shek toasted the vanquishing of imperial Japan. Four years later, following the resumption of hostilities between these tenuous wartime allies, a routed Chiang fled across the Strait to Taiwan. Today, the island-state is not recognised by the majority of international government yet remains the only truly democratic place in the Chinese world, whose historically icy relations with Beijing have warmed considerably over the last eight years of KMT rule, burnished by thriving business ties.

Public opinion has not followed suit, though, and more than 1,000 people protested the Ma-Xi meeting in Taiwan’s capital Taipei on Saturday. Many of Taiwan’s 23 million citizens remain fearful that economic integration hides the Trojan horse of soft colonization. This anxiety manifested itself in the storming and occupying of Taiwan’s national parliament in March last year after President Ma signed a raft of trade agreements with the mainland. The KMT’s position is that Taiwan’s close ties to the world’s second-biggest economy can help its own, which is sluggish.

But much as many in Taiwan are averse to the KMT’s perceived cozying to Beijing, the idea of independence, as previously championed by the DPP, is equally unpalatable. Polls suggest that most of Taiwan’s citizens favor the status quo, which is governed by the 1992 Consensus that there is “one China,” even if both the KMT and the CCP squabble over who has legitimate authority. The DPP’s constitution does not recognize the 1992 Consensus, opening the possibility of a formal break from the mainland, even outright independence. Although Tsai has previously articulated such sentiments she has remained pointedly ambiguous on this issue during her current campaign. The Xi-Ma meeting has made this position tougher to maintain, though, “bringing cross-Straits relations back to the spotlight in the election once again,” says Prof. Tsai.

Watching from the wings will be the U.S., whose overriding priority is peace and stability across the Strait. “Normalized cross-Strait diplomacy will increase stability in the relationship, and therefore the security situation in the Asia-Pacific,” says Dan Blumenthal, director of Asian Studies at the American Enterprise Institute.

Washington was clearly irked by some of the more provocative statements by former DPP President Chen Shui-bian, whose advocating of formal independence was met by threats of invasion and the firing of missiles into the Strait by China. However, “The DPP has matured since then; and perhaps even more importantly, Beijing’s attitude toward the DPP has also become more sophisticated,” says David Yang, a China expert for the IHS analysis firm.

Even so, this is unlikely to translate into a lasting accord between the neighbors. If China was really serious about repairing relations, says Blumenthal, it “should have frozen its program of military coercion against Taiwan and stopped its policy of isolating Taiwan by blocking its participation in regional and international forums.”

Nevertheless, it was a bold move by Xi to meet Ma, who has less than two months in office and an approval rating that barely reaches double-digits. The CCP’s Taiwan Affairs Office is unlikely to have sanctioned the Chinese President meeting such an unpopular figure, says Prof. Tsai, meaning Xi must have pushed for the talks himself.

“It show’s Xi Jinping’s strong leadership style as he’s different from his ‘caretaker’ [predecessors] like Hu Jintao and Jiang Zemin,” says Prof. Tsai. “He’s decisive and is willing to take the risk to meet Ma at this very difficult moment.” 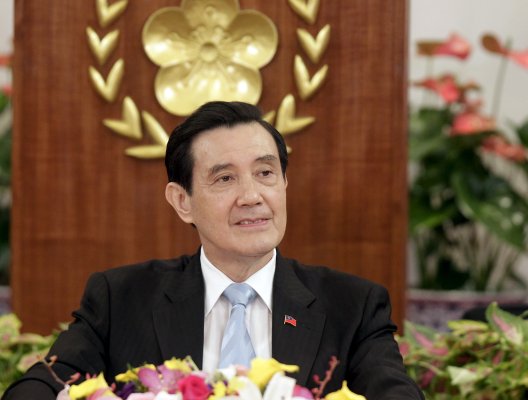 Taiwan's President Under Fire Over Historic China Meeting
Next Up: Editor's Pick