Just when you thought Kanye West and the Kardashian Krew officially “made it” in the high-fashion world (his Yeezy Season 1 collection sold-out, he’s being honored the Shoe of the Year award and the Kardashian-Jenners have befriended every couture designer in the industry), one fashion insider still isn’t buying the (insanely expensive) pieces they’re selling. In a new interview for the Huffington Post, Project Runway‘s Tim Gunn called the family, “vulgar” and “distasteful” — and that’s just the beginning of how he feels.

If you haven’t been “Keeping Up” with the Kanye/Kardashian fashion news, allow us to recap. West recently referred to himself as Michelangelo, called people who don’t like his shoes racists and proclaimed that ‘sweatshirts are f—ing important!‘ But all of that means nothing to Gunn. He doesn’t seem to understand “why” the family is in the fashion business. “When it comes to fashion I say to people all the time, if you want guidance for your fashion just consider this, if a Kardashian is wearing it — don’t.”

He goes on to say, “I think it’s vulgar and I just think given the amount of public exposure that the Kardashians have, to potentially be sending a message to people that ‘you too can dress like this’ — no.”

And if you thought he excluded the Jenner-half of the Kardashian dynasty, don’t worry, he thinks “absolutely nothing” of Kendall Jenner (who’s been walking in every major designer runway show this year year). When asked if he thinks she has that model “it” factor, he says, “I shouldn’t say that she doesn’t, I don’t know her, she may be a perfectly lovely young woman, I just feel that she’s tainted by the Kardashian aura of ‘yuck.’”

But overall, Gunn’s not too worried about his harsh remarks, “Let me tell you, the whole Kardashian clan doesn’t like me, so no surprise there.” 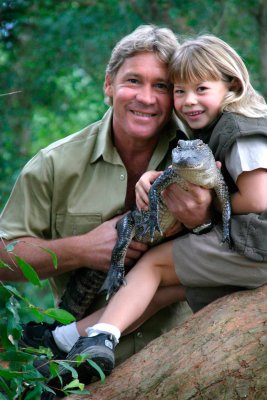 Steve Irwin's Daughter Needs to Prove He's Dead Before She Can Be on Dancing With the Stars
Next Up: Editor's Pick